Shortly after Globex acquired the properties in 2016, it began reviewing the large geological data bank to identify priority target areas for exploration. A few months later, the Company initiated a small drill program on the property with some remarkable results. For example, drill hole FS‐16‐35 intersected a near-surface gold zone grading 1.19 gpt Au over a true width of 40.19 m (132 ft).

These samples represent part of the surface expression and envelope of the Francoeur Number 1 gold zone, which was selectively mined underground at a small scale in the late 1930’s early 1940’s. It is surprising that surface material with such high gold values was deemed not worth following up upon and mining at the time.

The history of Francoeur-Arntfield starts in 1923 when the Arntfield property was first staked. Different companies conducted lots of work on the assets and both were even in production for several years.

However, historical exploration and mining focused on narrow high grade gold shears and veins which could be mined by traditional underground mining methods. Consequently, country rock (host rock), even weakly to moderately altered or mineralized rock, was in many cases not assayed!

Sometimes, during drilling or surface trenching, when sections of core were assayed, wide zones of lower grade gold values such as 2.40 gpt Au over 39.32 m, 1.71 gpt Au over 8.38 m and 1.71 gpt Au over 17.98 m were defined but ignored as uneconomic. Times have certainly changed.

In March 2016, Globex signed a Binding Letter of Intent with Richmont Mines Inc. to acquire a 100% interest in the Francoeur and Arntfield Mines, located in Quebec, Canada. The purchase included a modern office building, headframe and hoist, core facility, machine shop and sundry equipment. 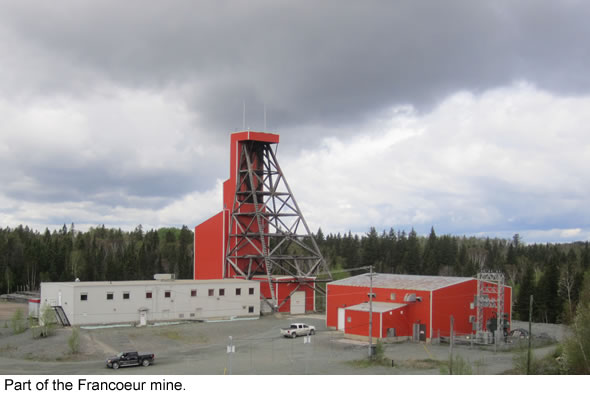 In exchange for the property package, Globex agreed to pay Richmont a 1.5% Net Smelter Royalty (NSR) on production at the mines, up to a total of $1,300,000 after which the NSR will be reduced to 0.5%.

Since then, Globex has been compiling and studying historical data and visiting outcrop areas at Francoeur-Arntfield with a large tonnage low grade gold mine scenario in mind.

Interestingly, Globex was mentioned earlier this week on BNN in a show called Market Call. When asked to comment on Globex, well known Fabrice Taylor replied that Globex was “the cheapest mining stock in the world”. Watch the clip below.

Fabrice Taylor is a Canadian financial journalist, publisher and investor best known for writing a stock-market column in The Globe and Mail newspaper. Since January, 2011, he has authored and published The President’s Club Investment Letter, a joint-venture with The Globe and Mail. He also writes an associated investment blog, and he’s a frequent guest on the Canada’s Business News Network (BNN).

The Francoeur-Arntfield gold assets are starting to look very attractive. The grab sample assays are impressive and spread all over vast areas of the properties.

Globex has requested a permit to do three 100 m long trenches in the area of Globex’s wide gold drill hole intersection. In addition, the Company will map, strip and channel sample a large outcrop area to the east of the drill hole where grade samples returned numerous signification gold assays. If all goes as planned, work should start later this month.

Undoubtedly lots more work will be conducted on these properties to outline a low grade, large tonnage gold deposit similar to other such targets and mines currently in the Abitibi. Unless of course a third party closes an agreement with Globex to option the property. Recommendation BUY.