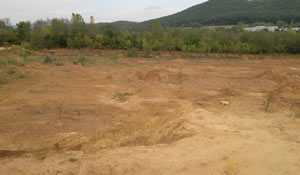 The current tailings site near the Strieborná silver project, shot during our site.

Global Minerals (CTG – $0.21 & DFPN – €0.147) signed an agreement to purchase an existing tailings management facility near its 100% owned Strieborná silver project in Roznava, Slovakia. The tailings site is adjacent to where the Company plans to construct a mill to process its ore when mining commences.

Payments include €300,000 on signing (complete) and the balance in quarterly payments over the next 1.5 years for a total of €2.5M. Although the current capacity of the site is sufficient for 5 years of production at a proposed rate of 750 tonnes per day, it can easily be expanded to hold the mine tailings of all current Strieborná resources.

The Company will need to submit an Environmental Impact Statement and Mine Development and Operations Plan with the Slovakian government to reinstate the facility, but it doesn’t foresee too much problems getting those permits.

The Company is fortunate that it was able to purchase its tailings site and the land on which it will build its mill and ore processing facilities, right next to its actual Strieborná mine. This way, it doesn’t have to haul its mined ore several miles to get it processed, which obviously simplifies the project and makes it more cost effective.

In order to determine the most optimal way to get the mined ore to the mill site, Global has contracted AGP Mining Consultants (AGP), a well respected mining consultancy with lots of experience in central and eastern Europe.

The goal is to evaluate the existing infrastructure, including the recently rehabilitated inclined shaft and 1.6km haulage tunnel, along with other possible ramp or shaft scenarios to transport the ore. Furthermore, AGP will research underground mining scenarios and processing alternatives that include floating a high-grade silver-copper concentrate.

The results from all these studies will be incorporated in a Preliminary Economic Assessment, which is expected in the third quarter of this year.

Around the same time, the Company plans to publish a new resource estimate for which underground drilling is now ongoing from the second drill rig at Level 6. Results from the first eight holes were very promising, as they all intersected the Strieborná vein.

Equally important to purchasing the tailings site, Global also signed a Memorandum of Cooperation with the municipality of Roznava, underscoring its good understanding with the local community and population.

In the document, the Company committed to cultural, social and environmental responsibility and also agreed to support the economic development of the region by providing employment opportunities in future mine operations. When the mine is in operation, Global foresees to create approximately 120 jobs in mining and ore processing. Because Strieborná is located in an area with a long mining tradition, it shouldn’t be too hard to find qualified miners.

The City of Roznava from its side expressed to support all activities benefiting the timely development and permitting of Global’s planned mining operation.

Unlike many other mining projects, which still have years of development work ahead, Global Minerals is already taking the necessary steps to take Strieborna to production.

It has excellent on-surface and underground infrastructure and a final PEA and resource estimate is being prepared. Moreover, Global has a solid management team, a good relationship with the local community and enough money to keep the project moving forward.

It’s well known that investors can reap high rewards in the timeframe between the end of a property’s development phase and the commencement of commercial production. Global Minerals shares have a buy recommendation with an initial target of $0.55, more than double today’s price.