Although we often write about the savings that EuroSite Power (EUSP – $0.65) customers generate after installing an on-site utility system, we rarely get to see the actual results of these lower costs.

Haverhill Leisure Centre in Suffolk, UK however, invited Mark Brown, Account Manager of EuroSite Power, to come visit its upgraded gym and power room as the reduced costs delivered by EuroSite Power’s 100kW Combined Heat and Power (CHP) and 87kW air-conditioning systems, that were installed at the centre in 2012, helped fund the refurbishments.

Both systems were installed and continue to be maintained and operated by EuroSite Power at zero cost for Haverhill. The customer only has to pay for the generated energy, which, in addition, is guaranteed to be cheaper than the displaced energy from the grid.

No exact numbers were released, but since the systems were switched on, Haverhill Leisure Centre has enjoyed six figure savings, thanks to a combination of the avoided capital equipment costs and lower energy bills. The savings are achieved primarily by reusing, rather than wasting, the heat generated by the system in converting gas into electrical energy.

As a direct result, Haverhill was able to reinvest those savings into the development of the business for the benefit of its users. 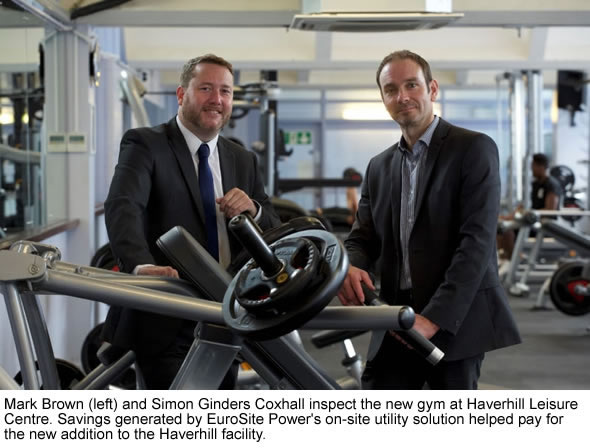 Haverhill Leisure Centre was the first in the UK to sign an on-site utility agreement with EuroSite Power.

Moreover, Abbeycroft Leisure, which manages Haverhill, and a number of other leisure centres in the UK, was also the first to sign a natural gas resale agreement with EuroSite Power in April, 2016. Remember that late last year EuroSite Power reached an agreement with Corona Energy, a leading independent energy supplier in the UK, to buy natural gas at very favorable prices.

Because EuroSite Power also pays for the gas on which its CHP systems run, this was a critical agreement, as it considerably improved the Company’s margins. The intention was to persuade all its customers to switch from their existing gas supplier to EuroSite Power’s gas offering. However, because natural gas prices in the UK have dropped more than 22% in the past twelve months, that matter has resolved itself. Consequently, EuroSite Power’s margins have since increased on all its operating systems.

Very interesting news for all (potential) EuroSite Power investors is that Paul Hamblyn, the Company’s Managing Director, will present live at the OTCQX Virtual Investor Conference at 10:30 am Eastern Time on October 4, 2016.

During the presentation Mr. Hamblyn will provide a summary of the Company’s unique on-site utility business model, discuss recent progress following the implementation of the Four Pillars growth plan (including European expansion strategy), and outlook for the remainder of the year. This will be a live, interactive online event where investors are invited to ask the company questions in real-time. The event can be accessed at: http://tinyurl.com/10otcpre.

For investors who can’t join the live event, the presentation will be recorded and will be available for 90 days.

Since 2012, EuroSite Power has been providing the Haverhill leisure centre with clean energy in the form of electricity, heating and domestic hot water, at a price lower than if it had continued to buy energy directly from the grid. These savings are now invested in a refurbishment of the centre’s facilities, for which it otherwise had to search for other financial sources.

This is just one example of customers immediately saving money thanks to a EuroSite Power installation. When a hotel installs an on-site utility system, it can use the savings to upgrade its rooms or facilities. Or when a school starts up its CHP unit, it can buy additional educational materials and improve its infrastructure.

Although on-site utility solutions are not the core business of these organizations, it is important for their management to realize that they can play a critical role in their future and development.

Make sure to tune into the live presentation for an update on the Company’s progress. Buy recommendation.