Most frozen vegetables are already used and appreciated by the food industry and consumers alike; however some are still lagging behind. This is particularly the case for vegetables that are high in water content, such as mushrooms, onions and peppers.

During the traditional freezing process, the free water content in a vegetable transforms into ice crystals, which break up the vegetable’s cellular structure. Consequently, the natural release of water when thawing is amplified, thereby altering the texture, appearance and taste of the vegetables. This is precisely the reason for which chefs prefer and recommend fresh vegetables.

With the InFlavor process, developed by EnWave (TSXV:ENW – $1.20 CAD & OTC:NWVCF – $0.90 USD) and Bonduelle, the world leader in ready-to-use vegetables; a portion of the free water contained in the vegetables is extracted before freezing, which preserves its cellular structure and other properties. InFlavor vegetables compare favorably to fresh vegetables when cooked.

This is an undeniable breakthrough in the giant frozen vegetables industry, which is only made possible through EnWave’s Radiant Energy Vacuum (REV) technology.

Bonduelle recently announced the expansion of the InFlavor production and their plans for major investments in that arena.

In Search for Perfection

Before InFlavor, the quality of frozen vegetables with high water content was never satisfactory. Consequently, Bonduelle was determined to further its research until a successful outcome was achieved. The challenge was two-dimensional in nature. On one hand, the technological process needed to be applicable on an industrial scale while on the other commercial viability had to be assessed.

To achieve this, Bonduelle invested more than six million dollars in production research, studies and trials. Given the breakthrough potential, the Government of Canada actively participated in the project by providing 2.4 million dollars in subsidies from the Agro-innovation program. Quebec’s Department of Agriculture, Fisheries and Food (MAPAQ) contributed $500,000 dollars.

When Bonduelle first saw EnWave’s REV machinery in action, the food processor was convinced that this was the technology they had been searching for. 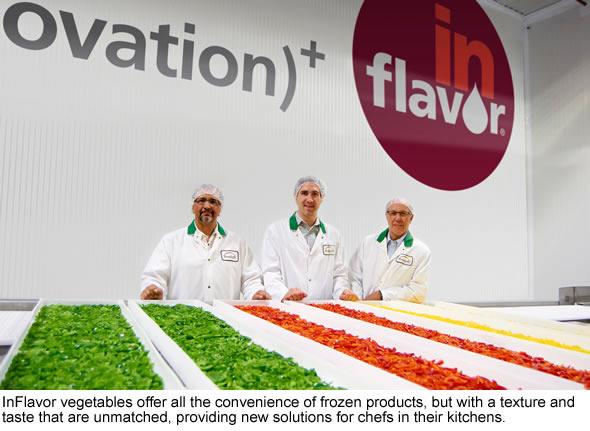 About nine months later, the new dehydration and preparation process, using partial vacuum-microwave drying, yielded its first conclusive results. Not only did the process provide frozen vegetables at their very best, but it did so with an incredible concentration of flavor and nutritional value, hence the name InFlavor.

To make sure they had gold in their hands, Bonduelle conducted blind taste tests and a qualitative study among food service professionals from the Institut de tourisme et d’hôtellerie du Québec (ITHQ). The specialists confirmed their interest in the InFlavor products and concluded that the vegetables tested could easily replace fresh vegetables in many situations. In fact, 90% of chefs would be willing to serve InFlavor vegetables. Their willingness to adopt the InFlavor products indicates the significance of the innovation; frozen vegetables with a high water content are generally overlooked by chefs in favor of fresh vegetables.

Moreover, in collaboration with the firm Contract Testing, Bonduelle also conducted a blind tasting with 103 participants. The results were unequivocal. The InFlavor vegetables were comparable to fresh vegetables as consumers were unable to distinguish them from fresh and even commented on their intense flavor.

The market potential is enormous for Bonduelle. According to a 2014 food study of the food service segment conducted by the research firm Technomic, it could exceed eight million kilograms (17.6 million pounds) annually.

Initially, Bonduelle intends to market mushrooms, onions and a variety of peppers. The strategy targets businesses that deal in manufacturing and transformation, as well as large chain restaurants, as their primary markets.

In addition, the basis for the InFlavor process can be applied to all vegetables that have a high water content, such as tomatoes, zucchini, eggplant, etc.

Bonduelle is currently in the process of planning the infrastructure, investments and logistics needed to support high volume production.

In other news, the NLS Food Evolution Summit, held in Palm Desert, California went very well for EnWave. The peer-to-peer networking environment was comprised of mainly senior innovation and R&D management for some of the leading food processors throughout North America and beyond.

EnWave management reported back that several new relationships had been sparked, based on the attendance and participation at this conference. 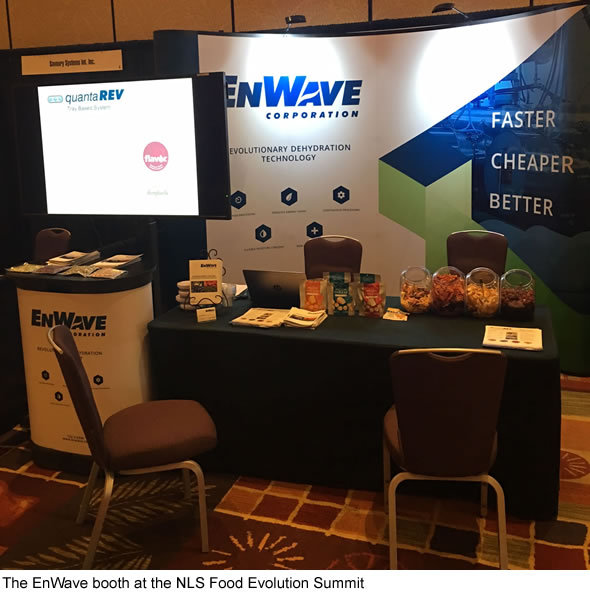 With their InFlavor process, Bonduelle is able to expand its product offer by literally introducing a new category of vegetables into the frozen food market. Major investments totaling six million dollars were made at the Sainte-Martine plant in the Montérégie area in order to transform it from laboratory production to mass production for the North American market. Three jobs were initially created and Bonduelle plans to add 20 more in 2018.

Markets are highly diversified and InFlavor vegetables can be used in so many ways that they have the potential to transform cooking habits in the kitchen. Positive feedback received from food service professionals, as well as influential key players in several niche markets, confirms the market potential for the InFlavor innovation, which the company evaluates at more than eight million kilograms.

It’s very positive that Bonduelle itself announced the potential and its plans for InFlavor. We expect that REV machine purchase orders will soon follow. In addition, Bonduelle will pay a production-based royalty between 3% and 5% to EnWave. In case anyone doubts, EnWave is worth much more than its stock price indicates today. Buy recommendation.