We attended the open house as well, and walked away impressed with the Company’s operations and its potential for growth (also see photos at the bottom).

Founded in 1926, the Wentworth Club is a privately owned golf and country club in Virginia Water, Surrey, Near Windsor Castle. It is surrounded by the Wentworth Estate – one of the most prestigious estates on the outskirts of London, UK. The club has three championship golf courses, a tennis & health club, and each year hosts the BMW PGA Championship.

In March 2013, a CHP system was taken into operation at Wentworth’s Tennis & Health Club. It produces up to 100 kW of power, or approximately 1.5 GWh of total energy per annum, while saving up to 235 tonnes of CO2, each year. The estimated revenue to EuroSite Power of this agreement is US$2.66 million over the fifteen-year contract term.

In February 2015, a second CHP unit was started up at Wentworth, this time for the main clubhouse. Engineers opted for another 100 kW system, that produces 1.3 GWh of total energy per annum, while saving up to 240 tonnes of CO2 each year. This fifteen-year long agreement will generate approximately US$1.87 million. 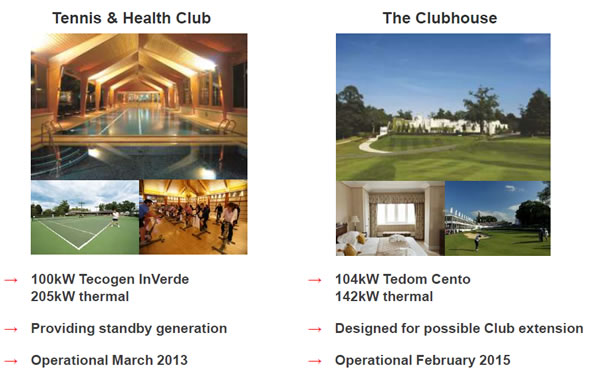 The Wentworth Club, like all of EuroSite Power’s customers, benefits in three ways from installing a CHP unit. First, the systems produce clean energy in the form of electricity, heating and domestic hot water at a price guaranteed to be lower than the Club’s existing utility suppliers.

Secondly, the club only has to pay for the energy it uses and avoids all capital, installation and operating costs. In addition, EuroSite Power handles all service, maintenance and repair, eliminating the need for personel to support the energy equipment.

And finally, good quality CHP is supported by the UK government. This allows customers to avoid certain taxes associated with CO2 emissions and energy use while EuroSite Power can also enjoy Enhanced Capital Allowance (ECA) on their investment..

We also learned at the event that, starting as of this month, the Company created an in-house maintenance department, that will be responsible for general maintenance and repairs to the majority of its CHP units in the UK.

This will not only help EuroSite Power to reduce costs, as it doesn’t have to hire any more third parties to do the job, it will also be very helpful to increase the availability and efficiency of its operational fleet, which drives up the Company’s margins.

The availability, or up-time, of EuroSite Power’s CHP machines has seen a dramatic improvement in the first part of this year. In January 2015, the average availability was 71%. After conducting some detailed work, the availability reached 81% in the second quarter.

Efficiency measures how much of a unit’s input fuel is converted to energy which can then be sold to the customer. In the second quarter of 2015 the average efficiency was 78%, compared with 74% in the same period last year.

Our visit to EuroSite Power’s open house turned out to be a very informative and productive one.

Only when you see and hear the machines in operation, you realize the amount of ingenuity that has gone into making all this possible. For example, each day the Company automatically receives a detailed overview from each unit how it performed during the past 24 hours. This way, deviating readings can be spotted immediately. Also, the Company receives alerts by email from each individual unit when, for example, temperature x is too high or pressure y is too low. In such a case, a maintenance crew can be sent over to check before the machine breaks down.

Also the testimony of the Wentworth Club’s Finance Director must have impressed the attending potential clients. All system capital, installation, operating expenses and support are paid by EuroSite Power, so Wentworth Club only pays for the energy it uses at a guaranteed lower cost than if it were to buy directly from the grid.

We were impressed and have lots of faith in the Company and its business model. Buy recommendation.
[metaslider id=7553]