This is a much needed service as oil and gas exploration and production (E&P) companies need to be ready for the more stringent flare capture regulations coming due in 2016 and 2020.

The Company believes that its newly founded NGL Services Division will generate between $5 to $10 million of revenues in its first year of operation. Knowing that American Power generated $6.2 million in revenues in its entire fiscal year 2014, it’s hard to underestimate the significance of this new market.

When oil is extracted from shale, a mixture of hydrocarbon gases (methane, ethane, propane, butane, pentane and other heavy gases) reach the surface at each well site. These gases are usually gathered in low-pressure pipelines for downstream NGL and methane extraction, or they are flared into the atmosphere when the gas-gathering infrastructure is too far away (remote well sites) or the pipeline is insufficient to accommodate the volumes of produced gas (stranded well sites).

In the Bakken region of North Dakota, there are over 2,500 well sites classified as remote or stranded. And in North America, there are thousands more well sites that have similar classification where pipeline access will never be logistically or economically feasible.

These remote and stranded well sites are under increasing regulatory requirements to capture and liquefy the flared gas into NGL. Currently, most mobile NGL processor technology can only capture 70% to 75% of the total flare. By January 1, 2016, however, E&P companies are obligated to capture 85%. When they don’t comply, they will either be penalized or they will have to reduce their oil output. As a result, they are desperately looking for a solution.

Trident’s modular and mobile NGL systems capture and process flared wellhead gas, converting the gas into hydro-carbon liquids, commonly referred to as NGL. This NGL is sold to a variety of end markets for heating, emulsifiers, or as a combined liquid called Y Grade that is sold to refiners for further processing. The majority of the remaining NGL is comprised of methane which, up until now, was too impure to be practically used.

This is where the story becomes even more attractive. The next generation NGL systems, which American Power also exclusively licensed from Trident, will be able capture and separate the methane flare in order to produce a premium quality natural gas capable of being compressed and used for many natural gas applications, including both stationary and vehicular dual fuel engines.

The two initial NGL processing plants that the Company bought from Trident are already operational at one of the top five E&P companies in the Bakken region. These units are generating revenues and are in fact forecast to be incrementally accretive in profitability. 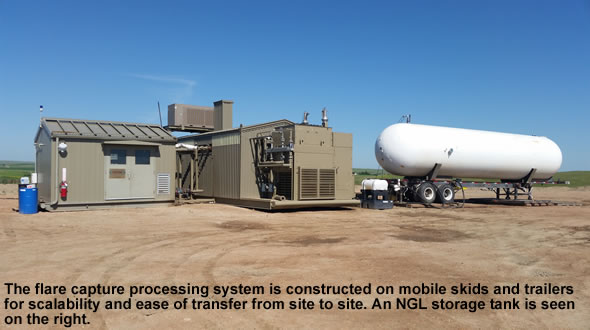 In addition, an agreement was closed earlier this week with one of the largest oil companies in the world to install two NGL systems at two well sites in the North Dakota Bakken region. Moreover, one of the two units will be equipped with a methane processing system. Installation of both systems is scheduled to occur in the course of 2015. American Power financed these two systems with a $3.25 million term loan that it closed late August with an institutional investor.

Lyle Jensen, CEO of American Power Group stated: “The purchase of the two new additional systems is in response to an overwhelming demand from operators of existing remote and stranded well sites and allows us to increase our processing capability in the Bakken. Since our initial announcement in August, the interest level in our flare capture and recovery services has exceeded all expectations with inquiries from all over the world reflecting the fact that flare capture and recovery at remote well sites is a much bigger challenge than first contemplated.”

An average remote or stranded well site producing one to two million cubic feet of flared gas per day has the capacity to produce several million gallons of NGL and over a million equivalent diesel gallons of natural gas on an annual basis making this a multi-billion dollar regulatory-driven market.

The Bakken region of North Dakota is an area facing significant penalties and restrictions through the year 2020 associated with the flaring of their well head gas.

There is a very large addressable market in the thousands of heavy-duty trucks supporting the oil and gas production industry. The ability to use conditioned wellhead/flared gas to safely dual fuel these trucks can provide an operator with a competitive economic advantage. American Power intends to be the first to bring oil and gas companies an integrated alternative fuel solution that delivers favorable regulatory, environmental, and economic results to their business.

Mr. Jensen added, “Last week, in support of President Obama’s effort to address climate change, the Environmental Protection Agency announced they will propose the first-ever federal regulations to cut methane emissions from oil and natural gas drilling by 40%-45% over the next decade. APG’s new methane capture and recovery system is designed to capture over 90% of the methane at remote and stranded well sites producing natural gas which can be used to reduce harmful NOx emissions by replacing diesel fuel by using our Turbocharged Natural Gas® Dual Fuel conversion technology. We are looking forward to integrating these market leading technologies into a formidable emission reduction solution.”

The strong decline of oil prices in the past year has resulted in a steady decrease in diesel prices. Because natural gas prices at the pump have remained stable, the price spread between diesel and natural gas has tightened. Since American Power’s dual fuel technology displaces higher cost diesel fuel with lower cost and cleaner burning natural gas, the decrease in oil/diesel pricing has impacted the timing of dealer restocking orders and the implementation schedules of existing and prospective customers in the near term.

There are plenty of good reasons to believe that federal, state, and local emission regulations will only get tougher when it relates to the amount of wellhead/flared gas that can be emitted into the environment.

American Power Group’s proprietary NGL capture and recovery process is the emerging leader in capturing and converting a higher percentage of the gases at remote and stranded well sites. Several of its competitors can’t even meet the 85% capture regulation due on January 1, 2016.

Moreover, the gas that’s produced with the NGL units, can be used in the Company’s dual fuel vehicular and stationary engines. Dual fuel stationary engines are, for example, used in the oil industry for applications such as drilling, fracking, pumping, air compression and mobile lighting towers.

It is estimated that American Power’s customers save between $40,000 and $60,000 per drilling rig when utilizing the Company’s dual fuel solution and conditioned wellhead/flared gas. As the idling of rigs across the United States appears to be slowing down, drilling service companies, as well as their E&P customers, are now focusing their efforts on cost reduction and improving operating efficiencies of active drilling rigs which makes the dual fuel solution the perfect complement to these efforts.

And while there are significant opportunities associated with the use of conditioned wellhead gas in stationary oil and gas drilling applications, there’s even a much larger addressable market in the thousands of heavy-duty trucks supporting the oil and gas exploration industry. The ability to use conditioned wellhead/flared gas to fuel these trucks can provide an operator with a significant competitive economic advantage as well as help address a significant pending problem for the E&P companies who have to eliminate the flaring of their wellhead gas. Buy recommendation.