News » EnWave’s Q3 Financials: Nothing is What it Seems

EnWave’s Q3 Financials: Nothing is What it Seems

This week EnWave Corporation (CA: ENW – $2.30 & US: NWVCF – $1.71 & GER: E4U – €1.54) announced its financial results for the third quarter, ended June 30, 2019. A consolidated net loss after taxes was reported for the quarter amounting to $1,322,000. This was much higher than the net loss of $104,000 reported during Q3 in 2018. Among the contributing factors to this result was the increase to the cost of sales and marketing activity related to securing the new partnership agreements. General and Administrative expenses also increased in line with the surge in business activity during the quarter. Furthermore, the recruitment of additional engineering staff had an effect on the bottom line.

It should be noted that these non-recurring charges related to corporate activity were expensed during the quarter and contributed to generate a net loss. However the initiatives serve to build a stronger corporate framework for growth that will generate positive long term effects. The expenses in Q3 represent an investment in the future for the Company.

For example, restructuring of Sales and Marketing functions at the wholly owned NutraDried subsidiary involved hiring of senior management personnel. (Also, see further details on the NutraDried restructuring below.) The increased expenses related to this activity during the quarter will pay off with longer term gains as the operational strength is realized in future quarters.

Record Sales in the Third Quarter

While a number of important milestones were achieved during the third quarter, perhaps the most impressive highlight is the quarterly revenue of $10,075,000. This represents an increase of 49% over the same period in 2018, and a new all-time quarterly record. Revenue growth is further illustrated by the quarter-over-quarter results. The Company achieved strong results of $8,773,000 in the prior quarter and easily surpassed this milestone in the current update.

Incremental revenue growth is a demonstration of the success to build partnerships with new companies, in a variety of sectors. International sales growth is also contributing to the top line. Several new machine orders were reported during the quarter, and many of the existing partnerships have expanded operations with plans to install additional REV units. At least eight more REV machines are currently in production, as part of the pipeline of orders scheduled for future quarters. This amounts to more than $10 million in additional sales revenue not included in the breakthrough numbers from Q3.

Delivering positive cash flow from operations is very important for an emerging technology story such as EnWave. Once again, the Company has positive cash flow, posting Adjusted EBITDA of $139,000 during the quarter. For the first nine months of 2019, EBITDA of $2,304,000 was reported, compared with $1,632,000 achieved during the same time frame in 2018.

Another important consideration, EnWave was able to strengthen its balance sheet during the quarter after successfully raising more than $10 million through a strategic investment by Aurora Cannabis. This also served to emphasize the growing importance of the relationship with Aurora, and the confidence that future growth opportunities remain attractive.

During the quarter, EnWave reported the installation of the first of several REV machines dedicated to the processing of cannabis. As part of an agreement with Tilray, Inc., a sub-license was granted to The Green Organic Dutchman [TGOD] to enable cannabis processing to commence within its territory in Canada. The 60kW REV unit is now operating with the potential output of 20 metric tonnes per year.

The achievement of this milestone is significant as a demonstration of the effectiveness of the technology. Representing a quantum leap forward beyond all other processing options, REV processing enables faster and more efficient drying of cannabis flowers. In addition, the technology contributes to lower spoilage and therefore more profitable operations. REV processing has also been proven for ensuring optimum moisture levels prior to subsequent processing into CBD oil and other extractions.

Among the many established royalty-bearing license agreements achieved so far, the emerging partnership that EnWave is forging with Aurora Cannabis is driving faster revenue growth. Aurora purchased two 120kW REV machines and one 10kW unit during the quarter. These are for installation in Canada.

Additional royalty-bearing licenses were granted to Aurora for processing of cannabis in Europe and South America. Similar to the Tilray agreement, Aurora has the rights in these areas to arrange sub-licenses with other cannabis producers. Royalty payments generated through sub-licenses are shared between Aurora and EnWave.

The partner companies also agreed to develop new innovations and technology adaptations for REV processing. This opens the potential to achieve further breakthroughs for REV technology.

Engaged in production and distribution of dairy products and snack foods, the NutraDried subsidiary generated a solid contribution to the net operating results for EnWave during Q3. NutraDried was granted a commercial sales license and pays a recurring royalty to EnWave based on the production of its Moon Cheese product line. Royalty revenue payments from NutraDried amounted to $270,000 for the quarter.

Meanwhile, a significant restructuring has been completed at NutraDried. This involved transitioning sales and marketing staff in-house to the NutraDried team. It will operate independently from the core business arrangement of EnWave in the future. A full time Chief Marketing Manager has been hired for the division, along with a newly appointed Senior Vice President of Sales, as part of this process.

The ongoing success of the Moon Cheese product line is building further sales leverage through the NutraDried banner, as over 25,000 retail outlets are now part of the distribution chain in North America for the healthy snack food. During the first nine months of the fiscal year, total revenue reported by NutraDried amounted to $18.1 million. The subsidiary expects to achieve full year sales revenues of $30 million. EnWave anticipates this growth performance will continue to improve, with a target for $50 million in sales for 2020.

Marketing of Moon Cheese is expected to achieve further gains through the fall as the products will be promoted within the Most Valuable Member coupon program through Costco stores. This program is expected to deliver exceptional sales growth in Q4. However the necessary inventory build-up was a contributing factor to the higher costs of sales item reported for Q3.

In a subsequent news update following the release of the quarterly results, EnWave reported yet another new partnership agreement. The Company has granted a royalty-bearing commercial sublicense to Glasshouse Botanics Inc., a private company based in Ontario, Canada. Glasshouse is engaged in the cultivation of high quality medicinal cannabis.

Glasshouse will begin processing of cannabis plants using a 10kW REV machine during a 3-month lease. An option arrangement was granted by EnWave to purchase the machine following the trial period. The sublicense granted to Glasshouse shall expire after the three month period if the purchase option is not exercised. Glasshouse will pay a royalty to EnWave based on the finished dried cannabis output using the REV machine. 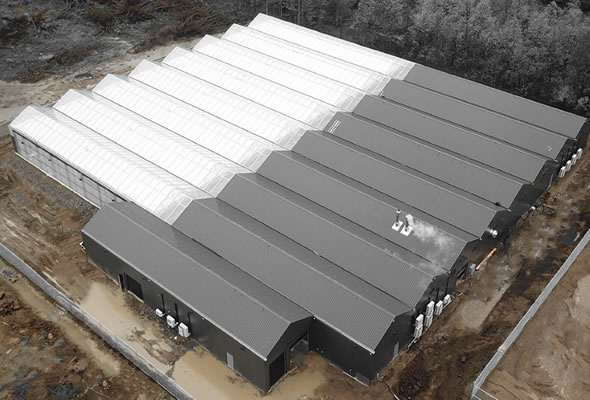 Established in 2017, GlassHouse Botanics is a privately owned and operated medicinal cannabis producer with its greenhouse located in Canada and processing and sales located in Malta. The first 43,000 sq ft of its planned 520,000 sq ft greenhouse is substantially complete.

In a separate news release, EnWave also announced that employee stocks options were granted. Pursuant to the EnWave stock option plan, the Company has issued a total 870,000 options to one director and certain employees. Exercisable at $2.19 per share, the options have a five year term.

Quarterly earnings reports represent a snapshot for an interval of time within the overall strategic development for a company. The scrutiny of certain data, with comparison to previous quarters, may illuminate certain longer term trends. For an ambitious technology development story such as EnWave, gaining market acceptance and building sales momentum are important objectives. The salient numbers presented in the third quarter earnings report are therefore very encouraging.

With the continued strength in revenue growth, and the highlighted accomplishments to build new partnerships and secure further royalty-bearing license agreements, EnWave is clearly making inroads to establish a long term profitable enterprise. The Company has also been able to maintain a strong balance sheet, and achieve positive cash flow on a quarterly basis.

It is common for an emerging technology company to encounter growth pains along the way. EnWave has been adept to navigate through its rapid growth rate while adjusting operations to achieve greater production. This is reflected in the transition of the S&M department for NutraDried, and the subsequent restructuring fee charged during the quarter. It should be noted that offsetting fees related to third-party sales personnel will no longer appear in future quarters due to this process.

EnWave has continued to attract talented personnel for senior management positions. The recruitment of additional engineering staff will enable the Company to develop enhancements for REV technology and build production of REV units to match the sales growth in the future.

EnWave achieved significant targets during Q3 and remains on track for a breakthrough year. The steady rise in the value of its shares is a testament to this overall success story. EnWave remains one of the top small cap growth stories in Canada.