EnWave Corporation (TSXV:ENW – $0.71 CAD & OTC:NWVCF – $0.56 USD), which offers industrial-scale dehydration technologies for food and pharmaceutical companies, reported positive cash flow from operations for the first time in its history. During the first quarter, ended December 31, 2015, net cash of $541,000 was generated from operating activities.

The impressive results can be attributed to the expanded distribution of Moon Cheese, the healthy dried cheese snack, and increased machine sales.

Gay Lea Foods, the second largest dairy co-operative in Canada, owned by over 1,200 dairy farmers, has purchased a 100 kW nutraREV machine for the production of “Nothing But Cheese”, a crunchy cheese snack.

Nothing But Cheese will be sold under Gay Lea’s well-known Ivanhoe cheese brand and will be available in two flavors: Cheddar and Monterey Jack with Peppers. The cheesy nuggets make unique croutons for soups and salads and add protein to snack mixes. They are available in bulk for food processors and in single serve 18g pouches.

First royalties from the 100 kW machine are expected before year-end and could reach $250,000 when operating at full capacity. 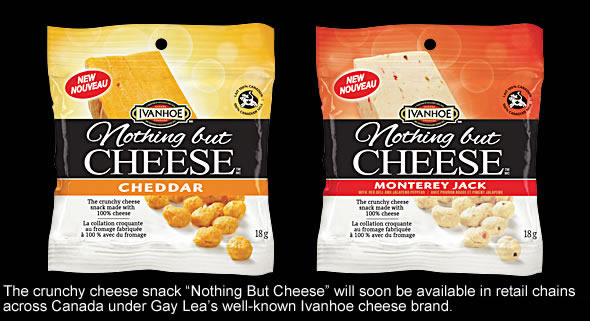 Since April 2014 Gay Lea has been operating a 10 kW nutraREV unit to test both the product and its market potential. Up until now production is modest and the snacks are only available in a few stores. As soon as the full-scale REV dryer is up and running – expected in the summer – the dairy company can start securing additional distribution.

Cheese Snacks Around The World

It’s evident by the rapidly increasing number of stores in which Moon Cheese is available that North America loves the cheese snacks. Other food companies worldwide are sensing an opportunity and have closed agreements with EnWave to produce similar dried cheese snacks.

Gay Lea Foods is only one of six geographically diverse royalty partners that have licensed REV technology for the production of cheese snack products.

Also, market tests with Moon Cheese have started at retail chains in Japan and Taiwan. If the outcome of the tests is successful, distribution could be increased and as such larger purchase orders would be placed with NutraDried.

We’re convinced more cheese snack agreements for other territories will be signed, as the snacks are an obvious success and food companies worldwide are eager to launch new innovative products.

Needless to say that becoming cash flow positive was a major milestone for EnWave. Although financials will remain lumpy in the coming quarters, it’s very obvious that the trend is up.

The growing number of operational REV machines, such as the one from Gay Lea, will increase EnWave’s royalty income. Moreover, with plenty of companies researching the potential use of REV dryers and several commercial machine purchase orders in the pipeline, we foresee 2016 to become the breakthrough year for EnWave.

Also, EnWave engaged a New York based IR firm to specifically spread the word about the Company and its potential in the United States. Buy recommendation.