During our recent visit to Anthem United’s (AFY – $0.34) Koricancha plant in southern Peru, it was clear that first commercial production would soon be a fact. This week, the Company announced first production of approximately 2,665 ounces of gold and 2,556 ounces of silver in doré.

Obviously reaching production is an extraordinary event for any resource company. Anthem has achieved this feat is less than two years after acquiring the Koricancha property, making it an even stronger achievement.

The Company will commence accounting for operations at the Koricancha Mill, in which it holds a 75% interest, as of October 1, 2015. So official first sales will be generated as of the fourth quarter, ending December 31, 2015.

The Koricancha project is being developed to process gold bearing ore purchased from legal small scale and artisanal miners at a fixed discount to market price.

Initial deliveries of mineralized ore commenced in June 2015 and have been accelerating to about 3,000 to 3,500 tons per month. As deliveries and stockpiles of mineralized feed continue to increase over the next several months, available capacity will be brought online as needed up to the 350 tonne per day total plant capacity. Full scale production is foreseen within the next six months.

What wasn’t mentioned in the report about our Koricancha site visit is that Anthem is set to acquire a second 350 tonne per day gold mill and associated mineral claims, called Chaparra.

In May 2015, Anthem entered into a binding agreement, along with its 20% joint venture partner EMC Green Group – also its 25% partner in Koricancha – to acquire certain assets that include:

Greg Smith, President and CEO of Anthem, commented: “The Chaparra Mill and mineral assets are complementary to our existing Koricancha Mill and the two mills combined create meaningful scale in what is currently a highly fragmented industry characterized by smaller, single asset operations.”

Similar to the Company’s existing Koricancha Mill, the Chaparra Mill will produce gold for its own account by processing gold bearing material purchased from small scale and artisanal miners in Peru.

The Chaparra Mill is located in the district of Chaparra, Caraveli province, in Arequipa, Peru. The plant is at low altitude with paved road access in close proximity to the Pan American Highway. The plant includes a 350 tonne per day crush, grind, carbon-in-leach circuit capable of producing gold loaded carbon for further refinement. Ancillary infrastructure includes a tailings facility, water storage, assay lab, truck scale, offices and a power station.

The existing plant is relatively new as it was only commissioned in 2012. It became available for purchase as the previous owner focused on their larger mining assets in the context of the turbulence in the resource sector over the last three years.

Anthem and EMC Green can acquire the Chaparra operations for total consideration of US$14 million to be paid as follows:

To fund the upcoming $7 million payment in February 2016, Anthem is looking at stream, debt, and equity financing options. Management is confident that it will be able to raise the necessary cash.

On closing of the transaction, the Company expects the Chaparra Mill can be re-commissioned over the course of approximately three months. 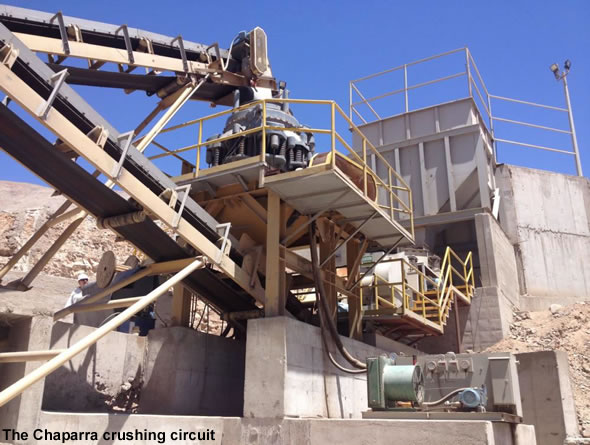 Gold and silver production at Koricancha are expected to increase as deliveries and stockpiles of mineralized mill feed continue to escalate and additional available processing capacity is brought on-line. We’re not there yet, but Koricancha is in production. It should be upwards and onwards from now on.

Acquiring the Chaparra plant will catapult Anthem into another category as it creates a multi-asset, growth oriented, gold milling company with significant scale in an emerging industry. Having 700 tonnes of milling capacity per day also has plenty of advantages. For example, the Company will then be able to sign larger off-take agreements for ore, which should be beneficial for its margins.

It seems that we recommended Anthem United at the right moment. First revenues will be booked in the current quarter and we expect they will increase for many quarters to come.