The rapid expansion of cannabis production in many countries has attracted a lot of attention in recent months. At the same time, this market has evolved to become one of the most important growth channels for EnWave Corporation (CA: ENW – $2.50 & US: NWVCF – $1.90 & GER: E4U – €1.69) as it REV drying equipment is a big cost saver for participants in the industry.

The combination of faster processing, with greater moisture content control and enhanced overall product quality, is establishing REV processing as the industry standard. This is evidenced by recent deals with major cannabis companies such as The Green Organic Dutchman, Aurora, and Tilray.

So far, EnWave has stayed on the sideline to close deals with U.S. based cannabis companies because the legal framework in the country is still uncertain. With legalization spreading across the United States however, it is only a matter of time before EnWave can start its conquest of the biggest cannabis market as well.

The production of industrial hemp on the other hand has recently been legalized in the United States with the passage of the 2018 Farm Bill. Hemp, which is closely related to cannabis, therefore represents a compelling opportunity to achieve further growth for the Company. As such, it’s exciting to see that EnWave reported its first U.S. partnership agreement in this space. 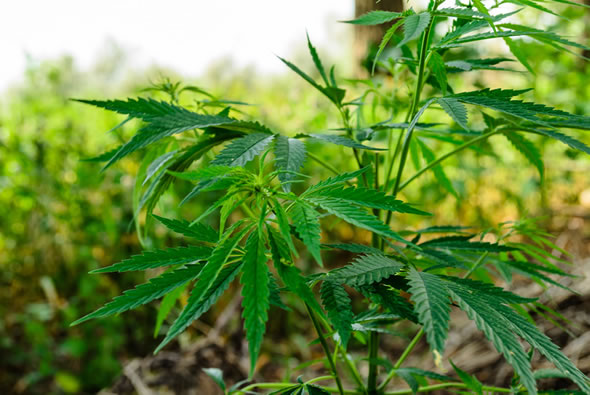 The Company signed a commercial royalty-bearing license agreement with Electric Farms LLC. From its primary cultivation center located in Tennessee, Electric Farms operates a 6,000 square foot greenhouse facility along with a 12-acre outdoor growing operation dedicated to the production of organic hemp. Approximately 10,000 pounds of dried hemp output is anticipated each year, for smoking and processing of extraction products.

A purchase order has been submitted for a 10kW REV machine to be installed in September at the Tennessee processing facility. EnWave shall be paid a royalty fee based on the weight of hemp plant material dried using the REV process. Exclusivity for processing hemp using REV technology has been granted to Electric Farms within the state of Tennessee.

Prior to this partnership, the partnership with Canadian-based Wasabi Farms is the only other agreement involving hemp. One may assume that a robust growth trajectory is emerging, similar to that of cannabis processing. Therefore, many more contract announcements with hemp producers may be on the way.

More good news was reported by EnWave regarding the advancement of an established partnership in another sector. Fresh Business Consulting S.L. (FBC) has opted to purchase another REV machine, thereby expanding the scale of its relationship with EnWave. Recall that in 2018 a TELOA agreement was signed with FBC that enabled a phase of development for food products in Peru. This arrangement eventually led to the purchase of a smaller REV unit in April of this year. The deal included a royalty-bearing license partnership as FBC embarked on commercial production of a line of dehydrated fruit and food products.

Testing continues while FBC determines which REV machine configuration will be optimum for its production objectives. EnWave announced this week that it has received a non-refundable deposit of USD $100,000 from FBC for the purchase of REV machinery with a minimum of 100kW in rated power.

A final decision has not yet been chosen for the ideal processing set up. Either the nutraREV or quantaREV equipment may be selected, with power options for 100kW or 120kW under consideration. FBC may also opt for two smaller 60kW units to provide greater flexibility for its product line.

FBC has plans to increase its market share domestically within Peru, as well as to secure steady exports for its product line to other countries in Europe and North America. As the larger REV unit is installed and brought online, the increased production output and sales growth from this expanded operation will increase the royalty stream for EnWave.

EnWave continues to announce new partnership agreements. Expansion is being secured within entirely new industrial sectors. In tandem, many of the existing partnerships are evolving to a more significant scale of operations. Often this involves the purchase of additional machines.

EnWave has again demonstrated the clout of its business model with the two separate news items recently reported. The beachhead into the United States hemp sector achieved through the partnership with Electric Farms is attractive, which opens the door for a rapid expansion into the sector.

Similarly, the decision by FBC to purchase at least one more REV unit also builds growth potential. A greater planned output of dried food products will lead to higher royalty revenues from the deal. So soon after the first REV unit was installed, this subsequent purchase also indicates that the processing technology is a valuable asset for this established food products company.

EnWave is achieving greater diversification among its clients as additional partnerships are secured. This diversity of operations contributes to royalty payments from a wider base of products. The rapidly increasing revenue from these royalties has established EnWave as one of the best small cap stocks in Canada.