Acme United (US: ACU – $20.10), the worldwide supplier of cutting devices, measuring instruments and first-aid products for school, home, office, industrial and hardware use announced that sales for the second quarter ended June 30, 2019, reached $40.2 million, an increase of 1% compared with sales of $39.8 million in the second quarter of 2018.

Sales during the quarter benefited from strong performance of first aid products, Camillus hunting and camping items, and Cuda fishing tools. At the same time, sales of Westcott back to school items were softer than in last year’s period. The trend of lower back to school sales in the second quarter is becoming more obvious as more parents purchase school supplies online in the third quarter.

Acme United’s second quarter has traditionally been the one in which a majority of the back-to-school products were shipped from the Asian factories to the distribution centers of major retailers. Those retailers would then receive the containers and distribute the products to their stores for sales in July and August.

With online sales though, Acme is receiving orders that closely match the timing of actual purchases by end users. Because in the U.S. and Europe most schools go back in session in August or early September, orders from online retailers, such as Amazon and Jet, are only received in the third quarter. 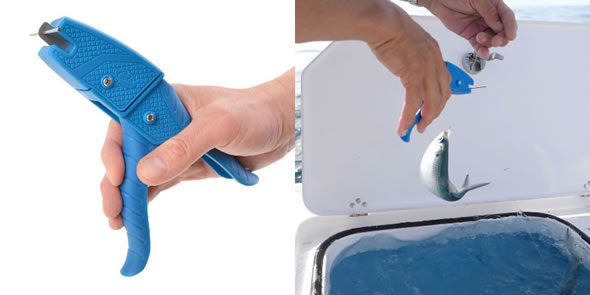 The Cuda Dehooker was the star of this year’s ICAST show in Orlando, Florida.

The major contributor to this result was the cost savings program that Acme United implemented in the fourth quarter last year. It let go of a number of people, which reduced personnel expenses by about $700,000 annually. In addition, third party sales reps were replaced by in-house people. Acme also cut back on print advertising and put more focus on social media, resulting in annual savings of $400,000. All these saving are going straight to the bottom line.

Walter C. Johnsen, Chairman and CEO commented the following on the outlook for the second half of 2019, “Revenues for the next 6 months are forecast to have solid growth in first aid, Camillus and DMT products. Sales of Westcott school and office products are expected to be consistent with last year. Accordingly, we are reiterating our financial guidance for 2019 of approximately $140 to $143 million in sales, net income of $5.0 to $5.3 million and $1.41 to $1.50 earnings per share.”

Exact revenues per segment for the second quarter will be available in the 10-Q, which will be filed mid-August. However, Acme announced for each segment the percentage by which revenues increased or decreased compared with last year’s second quarter. Based on those numbers, we can give a fair estimate.

In the U.S. segment, net sales for the three months ended June 30, 2019 increased 1% compared to the same period in 2018. Sales of first aid and safety products were strong; however, there was softness in sales of certain school and office products in particular pencil sharpeners. On the other hand, the recently introduced Westcott glide scissors for precision cutting have been well-received. Net sales for the first six months of 2019 in the U.S. segment were constant compared to the same period in 2018.

Net sales in Canada for the three and six months ended June 30, 2019 decreased 10% in U.S. dollars and 6% in local currency compared to the same prior-year periods, due to a decline in the office channel.

The Company expects to end 2019 with approximately $36 million of net debt and to generate between $5 million and $6 million in free cash flow.

The International Convention of Allied Sportfishing Trades, better known as ICAST, is the world’s largest sport fishing industry trade show. ICAST is the ultimate showcase for the latest innovations in gear, accessories and apparel that help to make a day on the water both exciting and rewarding. Keeping up with that tradition, Cuda launched many new tools at the show with unique features and benefits. Most tools are scheduled to be available in stores from fall in the U.S., Canada, and Europe.

One of the most exciting new products at ICAST this year was the Cuda Bait Dehooker, which quickly and easily removes bait from Sabiki® rigs (click to see video). Featuring an ergonomic trigger handle for rapid bait release fishermen are able to safely control hooks and line while dehooking. The handle has the Cuda Scale Pattern, which provides a secure and comfortable grip in all environments and conditions.

The Cuda team had excellent meetings at the show with existing and potentially new customers. Mr. Johnsen commented, “It was probably the best ICAST we’ve ever had.”

Acme United again achieved a solid second quarter. Camillus, Cuda, and DMT businesses continue to grow, and are expected to show a strong second half of the year.

Especially DMT looks promising. The diamond sharpener brand recently expanded its production capacity and is beginning to fill significant back orders. Demand for DMT products have been particularly strong with industrial and hardware accounts in the U.S. and Europe.

Moreover, the SmartCompliance business is becoming a big success. This is a typical razor/razorblade sales model, as Acme United initially benefits from the placement of the first aid kits, and then as people use the components, there’s a strong resale business. In fact, revenues from refills about equal sales of the kits.

Acme’s strategy to refill the kits through the internet is contrary to service people in delivery vans who will typically go into different locations to fill the first aid kits and then come back on a regular basis. The latter is obviously a time consuming and very expensive model, as the cost of the individual sales staff, the truck, the employee, and benefits have to be taken into account. Consequently, Acme United is clearly gaining share in this $600 million market segment.

Also, the Company has reduced its net debt by over $5.0 million during the past 12 months and continues to seek tuck-in acquisitions.

Mr. Johnsen concluded, “Our cash flow is strong and we plan to continue to pay down debt. We also continue to evaluate acquisition opportunities. They’ve helped the Company more than double since 2010. And we anticipate acquisitions to continue this trajectory in the future, building value for our shareholders in the process.” Smallcaps Recommendation: BUY.