Bovie Medical is Making Its Move

Bovie Medical Corp. (BVX – $2.02) has a solid $25M a year business selling mainly electrosurgical equipment and cauteries to outpatient clinics. With these devices wearing out at around eight years of use, they get replaced on a regular basis and create a steady revenue stream for the Company. See Bovie’s core business broken out by percentage of revenue below.

The gross margins on these products are about 40% and they generally run this part of the business between a small loss and a small profit. Bovie is forecasting mid to high single digit growth for this core business in 2016.

The hero of the Bovie story however is the little gun-like device titled J-Plasma, a masterful evolution in energy based surgery. This is really the “secret sauce” that makes this Company special and why we’re recommending it at this moment.

Bovie has been developing J-Plasma since 1998. It received FDA approval for it in 2012 and CE Mark approval in 2015. It is protected by 20 patents, 9 issued and 11 pending. The commercial launch of J-Plasma started in October of 2014. But first substantial revenues didn’t occur until Q2 of 2015, due to the 3 to 9 months it takes for device approval to move through a hospital’s Value Analysis Committee (VAC) – all new medical products enter a hospital system through these central committees.

To accelerate the rollout of J-Plasma, the Company in December of 2013 brought in industry heavyweight Rob Gershon to lead Bovie as CEO. Gershon was previously VP of Sales and Marketing for a $1B division of Covidien (2008 to 2010) and then was VP of Sales and Marketing of a $1.4B division of Henry Schein (2010 to 2013). Why would he come to lead Bovie Medical with a mere $25M in revenue? The only possible reason is that he saw the explosive potential of J-Plasma to transform energy based surgery.

The best way to describe J-Plasma is to think of a blow torch where the flame is plasma produced by ionizing helium gas with electricity. The J-Plasma unit is comprised of two parts, a generator and a single use hand piece. The generator manages the electricity sent to the hand piece and is the “razor” in this “razor and razor blade” business model. The disposable hand piece on the other hand is the ‘razor blade’.

The revolutionary J-Plasma technology has some key advantages over the ubiquitous CO2 laser, used in various incarnations since the 1970’s.

The biggest advantage would be thermal spread. Operating at a much lower temperature than the CO2 laser, with a constant flow of helium gas for cooling, J-Plasma produces significantly less damage to surrounding tissue.

Simplicity of use is another major advantage for J-Plasma. Lasers can easily extend too far in depth and again create collateral damage in tissue. This particular problem is enough to scare off surgeons who don’t want the possibility of that kind of mistake happening. J-Plasma’s plasma stream is more easily controlled and cannot extend past 15mm. And the helium gas flow pushes aside debris to better expose the tissue for treatment. 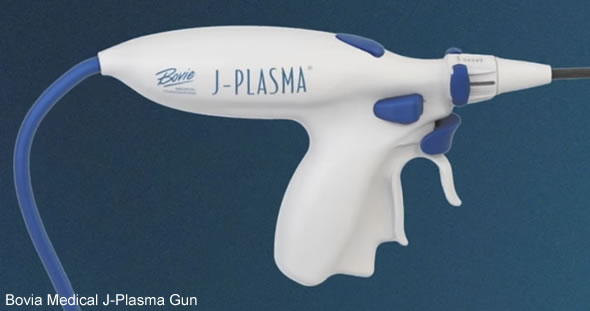 Very importantly, J-Plasma also beats its main competitors on price. A complete J-Plasma unit costs between $20k and $35k, while a laser generator has a $100k price tag. Hospitals will also save money each surgery as the J-Plasma disposable hand piece costs $375+ compared to $425+ for a disposable CO2 laser tip.

Moreover, the J-Plasma hand piece has a retractable scalpel blade that can be extended to give the surgeon the option to manually cut tissue without switching instruments. Laser does not offer this option.

Finally, CO2 laser requires special eyewear to protect the eyes of those viewing a surgery as well as towels or wet drapes to prevent reflection and unintended burn hazards. The laser’s extreme level of brightness also presents challenges for video recording of surgeries. Usually the color wavelength of the laser must be cancelled out in the video, distorting the color of the entire video. J-Plasma doesn’t present the viewing dangers and the video recording challenges of laser.

The GYN target market is enormous, estimated by Bovie to be $900M per year in the US alone. Illustrative of this market is the treatment of endometrial lesions. Each year 600,000 procedures are performed where a laser is used to ablate endometrial lesions. There are an additional 400,000 women who are opened diagnostically to look for endometriosis, but either do not have it, or it is on delicate structures such as the ureter, fallopian tubes, ovaries or bowel.

Due to the risks of a CO2 laser, most surgeons will not operate on endometriosis when it is situated on those delicate organs. J-Plasma’s low operating temperature, precision and limited thermal spread on the other hand allow surgeons to tackle endometriosis on those structures.

Plastic surgery is another exciting market for J-Plasma. Facial resurfacing using J-Plasma can permanently remove wrinkles. Even with a 7-10 day recovery period and estimated $4500 – $6500 whole face treatment cost this procedure is attractive because the patient doesn’t need to return for more Botox every few months. The treatment will pay for itself in a few years of not having to inject Botox on a regular basis.

The pioneering clinic for this procedure is in Nashville, TN, and it has already booked more than 275 patients to have the procedure done in the last seven months. Since the plastic surgeon can use J-Plasma without a hospital VAC committee delaying the process, the penetration of this market seems to be proceeding quickly. Bovie hasn’t provided any breakdown of use among surgical disciplines, but anecdotal evidence is adding up for a breakout adoption of this technology in plastic surgery.

The uptake of J-Plasma in hospitals has been wildly successful so far. Of 61 VAC decisions at of the end the third quarter 2015, 59 hospitals approved J-Plasma and 2 declined it, saying they wanted to see clinical studies about J-Plasma’s effectiveness. This 96% approval rate is indicative of the high regard that surgeons have for J-Plasma.

Each generator is expected to generate approximately $78,000 per year in revenue when used a typical 4 times a week with a $375 hand piece.

Although Bovie is not likely to disclose margins on this product, to avoid hospitals trying to pressure them into a lower average selling price, estimates range from 70% to 90% before sales commissions. As J-Plasma sales take off though, we may be able to indirectly calculate roughly what J-Plasma’s margins are.

In the GYN and plastic surgery markets the primary competitors to J-Plasma are the CO2 laser and the Argon laser. Bovie believes it has key competitive advantages over these technologies and it will be able to displace them in those markets.

In other surgical disciplines there will be different players, but J-Plasma will be a very strong competitor in those markets as well.

Bovie has had a third party evaluation of their J-Plasma patents and believes they have sufficient intellectual property to thwart any attempt to reverse engineer their product and bring to market a helium based competitor. The physical properties of helium, specifically the low temperature at which it is ionized, should provide a competitive advantage to devices built around other gas based plasmas.

The year after Mr. Gershon took over the helm at Bovie Medical, he brought in a world class management team and then proceeded to build a direct sales staff of 16 senior medical device representatives that are dedicated to selling J-Plasma.

Although Bovie Medical has a solid business selling electrosurgical equipment and cauteries, the J-Plasma is clearly the growth driver of the Company. Bovie Medical’s J-Plasma revenue stream is so beautiful it makes an investor blush.

J-Plasma’s revenues are expected to ramp up very quickly over the next few quarters. As a result, it is very possible that Bovie will become cash flow positive in the second half of 2016.

With $13 million in cash at the end of the third quarter 2015, Bovie does not believe it will need to do any further capital raises before achieving profitability through J-Plasma.

The Company has also worked hard to attract mind share as well as market share. They currently have 10 published white papers covering J-Plasma use in different scenarios and have recruited three world renowned surgeons to their J-Plasma medical advisory board.

With valuations of fast growing medical stocks easily attaining P/E ratios of 50-100, there could be substantial value unlocked as Bovie crosses the threshold into profitability with a wide open J-Plasma market ahead of it.

With some intrinsic value for the core business, patents, and the $13M in cash, the upside potential of Bovie Medical is attractively priced at $2.02 a share. Buy recommendation.