Acme paid $7.0 million in cash for the company. In 2015, DMT had revenues of $5.4 million and EBITDA of approximately $1.0 million, which indicates that margins are high. The acquisition is expected to be immediately accretive.

Acme aims to immediately increase DMT’s sales, and as such its earnings, by offering the products in chains where the sharpening tools aren’t available yet and with whom Acme already has a good standing relationship.

In addition, it has plans to broaden the DMT product line. For example, by making hand ground sharpeners for hunters and fishermen. There may even be some sharpeners introduced under the Cuda or Camillus brand.

Walter C. Johnsen, Chairman and CEO of Acme United, commented, “DMT complements Acme United’s existing brands and products within the industrial, hardware, floral, food preparation and sporting goods markets. We intend to keep the DMT operation in Massachusetts, and expect to expand the business and distribution through Acme United’s broad customer base, innovation, and global reach.”

Diamond Machining Technology was founded in 1976. Originally a manufacturer of grinding wheels the company repurposed a center punch-out of a diamond grinding wheel and developed an entire new way of manual sharpening. After testing a sample of a center punch out sent to them, a purchasing agent for L.L. Bean extolled the product’s sharpening performance and worked with the engineers at DMT to refine the resulting product. That cooperation launched DMT on its way to becoming the recognized leader and the industry standard in diamond honing hand tools. 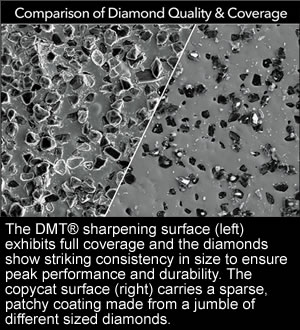 Suddenly, there was an alternative to the traditional methods of sharpening that required no messy oil, never grooved or hollowed, and lasted and lasted. It was an unbreakable, clean-cutting, and super-fast sharpener, It was a tool that could sharpen any material, including the toughest composites, ceramics and any metal, including tungsten carbide and even polycrystalline diamond inserts.

DMT’s products differ significantly from those of its competitors. For example, DMT makes certain that each sharpening surface carries the most diamonds per square inch in the industry to guarantee long-lasting performance.

The uniformity of the diamond is also key to a sharpener’s performance. DMT uses a proprietary process that ensures near-perfect consistency in grit size. The result is a micronized monocrystalline diamond that covers evenly across the sharpening surface to prove effective with every use, year after year.

DMT currently has 28 employees and sells its products at chains such as Home Depot, Bass Pro Shops, Grainger, Fastenal, and Amazon. It manufactures all its products in the United States and exports worldwide to nearly 50 countries.

Throughout its history, DMT introduced more than 125 products and was granted over 50 patents and trademarks. In addition, the company has earned countless awards, including HANDY Innovation Award; Seals of Approval from the North American Hunting Club, the National Home Gardening Club, the Handyman Club of America and the Cooking Club of America; seven Blade Magazine Knife Accessory of the Year Awards and an international award for innovation at Germany’s International Hardware Fair.

Acme United has picked up an innovator of a full range of diamond sharpening products that are dependable and solve a multitude of sharpening, honing or deburring needs.

In just 40 years, Diamond Machining Technology’s patented and award-winning products have become known worldwide for their superior quality and versatility. They are easy to use and allow for sharpening in a fraction of the time required by other methods. Synergies for Acme’s cutting products are plenty and obvious.

Because it’s a leader in its category, margins are relatively high. DMT generated EBITDA of about $1 million in 2015, and judging by Acme’s plans for the new brand that number may increase significantly this year. To put that all in perspective, in 2014, Acme United’s EBITDA was $9.09 million, while net earnings reached $4.78 million.

Acme United is currently trading at a P/E of less than 10 and has solid growth prospects. Buy recommendation.