Just a few days after our initial Research Report on Aura Health (CA:BUZZ – $0.07 & US:LMLLF – $0.05) was published, the Company surprised the markets with a multi-year supply agreement at very attractive conditions.

Aura is building a vertically-integrated medical cannabis company with a focus on the European market. In order to do so, the Company established a beachhead in Europe when it acquired an 80% stake in Pharmadrug Production GmbH, a German medical cannabis and pharmaceutical distributor.

Pharmadrug can materially increase its sales in the coming quarters by increasing its quota from the Federal Institute for Drugs and Medical Devices, known as BfArM (“BfArM”). Today, Pharmadrug has a 190 kg 12-month allocation from the regulator in Germany, which equates to sales of over $2.7 million.

However, there is plenty of room for expansion. That is exactly what Aura Health has achieved this week!

Pharmadrug signed a five-year supply agreement with Israeli grower My Green Fields Ltd. In the first year, 500 kg (500,000 gram) of dry flower or oil equivalent will be supplied to Pharmadrug at a fixed price of €4,00 per gram. Knowing that Pharmadrug is currently selling dried cannabis within Germany at €9.50 per gram, this deal is expected to generate €4.75 million in sales in the first year at very attractive margins.

In subsequent years, Pharmadrug will have access to up to two tons (2,000,000 gram) of dry flower or oil equivalent per year at market-determined or mutually agreed upon prices. All products will be sold under Pharmadrug’s own ‘Cannabion’ brand.

This is really the start of Aura’s conquest of the European cannabis market. Up until now Pharmadrug only had a relatively small supply agreement. This agreement with an Israeli grower takes the Company into another category.

Daniel Cohen, CEO of Aura, commented, “We are excited to enter this strategic partnership with My Green Fields, providing our German distribution base with additional supply in a market that remains very tight with chronic shortages. Our access to oils and extracts will be extremely beneficial to the Company in serving German pharmacies as well to other European markets.

Located in Northern Israel, My Green Fields is a nursery and cultivation license holder that has nearly completed the buildout of one of Israel’s only indoor facilities. The operation will have 300,000 square feet of canopy utilizing advanced growing techniques. 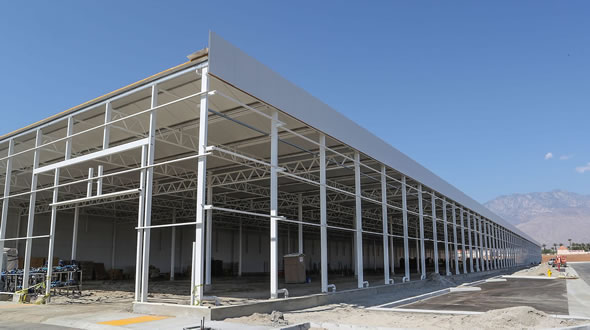 My Green Fields has nearly completed the buildout of one of Israel’s only indoor facilities. (Image for illustration purposes only)

My Green Fields expects to plant its first harvest in January and should be ready for its first commercial harvest in the summer of 2020. This would be an ideal timing as Israel passed its cannabis export law in January 2019 and the framework is currently being put into place. As a result, cannabis is expected to begin flowing from Israel to Germany as early as the first quarter of 2020.

Very important to note is that Israeli sourced cannabis is ideal for the German and European market in that facilities are already built to eGMP standards and thus no addition certification is required from the regulatory body. My Green Fields ensures that its facility will meet EuGMP standards, German regulatory approvals, and registration requirements.

The European medical cannabis market will soon command significant attention. Europe is home to more than 740 million people, a population which is more than double that of the United States and Canada combined. Industry analysts expect Europe to be one of the largest consumers of medical cannabis around the world.

The German medical cannabis market is estimated to reach $1.6 billion in sales by 2022 based on a recent study completed by Arcview Market Research and BDS Analytics. The problem, however, is that little capacity exists within the country to produce cannabis locally. As a result, the nation has been forced to turn to imports for its medical cannabis needs.

Moreover, Aura plans to grow its distribution platform beyond Germany into other European Union countries. Pharmadrug is a Schedule I Narcotics distributor, allowing the German business to export GMP medical cannabis to other EU countries as and when those countries legalize cannabis. For instance, Poland awarded medical cannabis import licenses in 2018 and began importing this year. The French Senate passed a bill in June for a trial run of CBD, trace-THC medical cannabis. With no plans of domestic cultivation, France will require importation of GMP medical-grade cannabis. As well, Italy is currently importing from Netherlands.

The number of companies that are qualified to bring cannabis into Germany are very limited. In fact, there are only four public companies at the moment. While the first three owners of a distribution license come as no surprise – Canopy Growth Corp, Aurora Cannabis, and Aphria, some of the largest cannabis producing firms in the world – the fourth is Aura Health.

Thanks to this week’s agreement, Aura Health has reduced the supply bottleneck. The Company, the industry and its patients stand to benefit. Smallcaps Recommendation: BUY.