Another series of assay results from the Parbec project was reported this week by Renforth Resources Inc. (CA:RFR – $0.07 & US:RFHRF – $0.05 & GER:9RR – €0.04). This news covered four drill holes completed earlier this year as part of the second phase of drilling work. The gold values reported for the program continue to demonstrate very encouraging mineralized intervals. Each successful drilling hole contributes towards the expansion of defined gold resources at Parbec.

Noteworthy among this batch of assay results, one interval from PAR-21-142 of nearly 10m of drill core carried an average grade of 1.75g/t of gold. This section terminated at a depth of 128m down hole. It is well within the prospective open pit shell that has been modeled for the optimum extraction scenario. Within that interval, a more narrow section was enriched with 7.27g/t gold. Four separate bands of gold mineralization were encountered in this one drill hole. One other notable intercept spanning 24.55m of drill core was mineralized with 0.95 g/t gold.

Multiple intervals of gold alteration were also encountered in the other three drill holes reported. These were encountered starting from just below surface down to more than 350m in the deepest interval from PAR-21-148. Also of note, the winning streak for Parbec exploration remains intact as all of the drill holes completed by Renforth so far have achieved at least one significant gold-bearing interval. There are now only six drill holes from Renforth’s latest drill campaign for which samples are still pending.

Earlier this summer, Renforth opted to engage in a surface stripping program at the Victoria West target area of Surimeau. This program will allow geologists to assemble additional information on the structural setting of the deposit area.

A small portion of the main structural trend has been exposed at outcrop. The effort to strip overburden further along strike will reveal a larger section of the near-surface mineralization. This in turn will enable a larger area of the deposit to be sampled and analyzed. Data generated from the program will be helpful to build a more complete geological model for the structural controls of the deposit at this early stage of exploration. 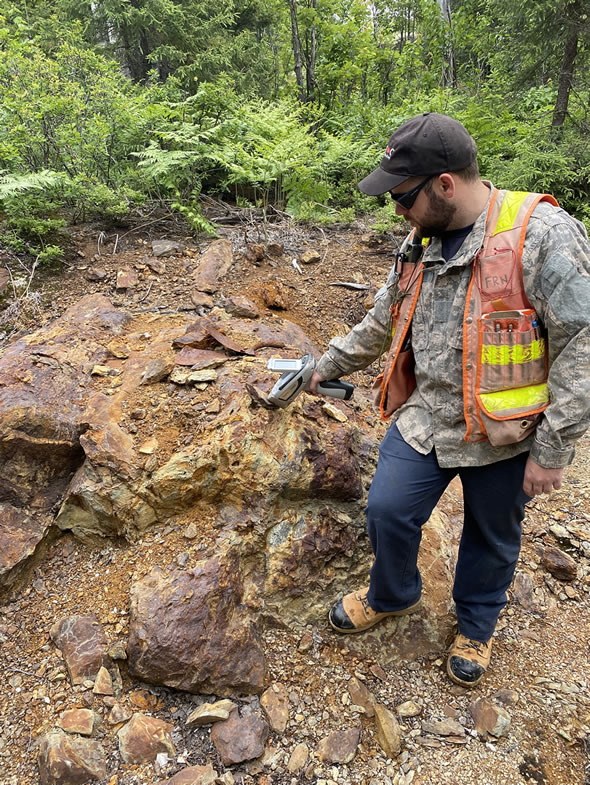 This week, Renforth reported that the permit has been granted to commence the fieldwork. Extraction of chip samples from outcrop sections will be underway within a week. Surface stripping further along strike is planned to begin shortly afterwards. In total, upwards of 9500 square meters of surface stripping is expected during the work. Chip sampling is planned to advance along more than 18,000 square meters of the target area. This work will include sections of the mineralized system that have not undergone prospecting previously.

The Company will also be conducting these operations so there is minimal disruption to the local community. The program will involve using compressed air to clear debris from the bedrock exposed in the stripping program. This will minimize consumption of water resources during what has been an abnormally dry year for the district. In addition, work is expected to be completed prior to the opening of hunting season.

The assay results reported from drilling work at Parbec continue to confirm attractive gold values. The program was designed with multiple objectives, including step out drilling along strike and much deeper targets than previously considered. Infill drilling work was also a priority to build data in gap zones that could add a significant tonnage to the established resources of the deposit. Historical drilling work completed by previous operators of the property required confirmation drilling to include these sections into the resource estimate. Renforth has accomplished all of these objectives.

The latest batch of assay results once again includes highlight intervals of continuous mineralization across wide sections of drill core. Each of the drill holes encountered multiple gold-bearing zones at various depths. Many of these sections build the magnitude of gold content within the deposit suitable for open pit extraction. This is even more attractive considering that the open pit resources of the adjacent Canadian Malartic Gold Mine are rapidly depleting. Parbec is becoming a more compelling acquisition target with every successful exploration update.

Surimeau is also gaining prominence as a compelling exploration prospect. Copper-nickel-zinc mineralization has been reported in every drill hole so far. A near-surface deposit has already been outlined along more than 2.2km of strike and up to several hundred meters in width. The market is anticipating the receipt of assay results. Renforth has opted to launch a significant surface stripping and sampling program this month to build further data on the structural setting prior to advancing to the next phase of drilling. This is consistent with the approach to advance work efficiently and effectively with a disciplined strategy of field work that has served the Company to achieve notable discoveries. Renforth is already planning to follow up with further drilling work at Surimeau this winter. Smallcaps Recommendation: BUY.