News » After 46 Attempts, Stronghold Drills First Holes With NO Mineralization

After 46 Attempts, Stronghold Drills First Holes With NO Mineralization 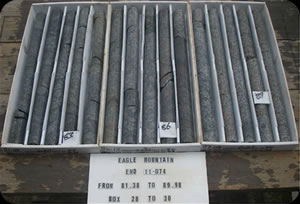 Drill core from hole EMD 11-74 from the Zion zone at Eagle Mountain.

Stronghold Metals (Z – $0.28) finally drilled a hole with no gold mineralization at its Eagle Mountain Gold Project in Guyana. To date, Stronghold announced analytic results on 46 holes from its ongoing 15,000 metres drill program, of which 44 intersected gold mineralization of meaningful widths and grades, which is very exceptional, if not unique.

This week, Stronghold reported lab results from 14 holes with gold values between 0.59 and 30.0 grams per ton, which is perfectly in line with the average gold grade of productive open pit mining systems in the Guyana Shield region.

These results, along with the analytic results announced in September, will certainly increase Eagle Mountain’s current NI 43-101 resource estimate of 733,500 ounces of gold. Interesting to note is that more than 250,000 ounces of gold is hosted in saprolite rock, making it relatively easy to extract the gold at a low cost. It’s Stronghold’s intention to extract the gold from the saprolite host as fast as possible.

In 2012, Stronghold wants to obtain a new NI 43-101 compliant resource with the results from the current drill program included. Based on that resource, an Economic Assessment Report will be prepared to support an independent gold mining operation.

It’s the intention to initially focus on mining the gold in the saprolite rock, which is at surface and can be successfully and economically mined due to the ease of extraction. The cashflow generated from these mining activities will be used to fund further exploration of the Eagle Mountain property.

Very interesting is that IAMGOLD, the previous owner of Eagle Mountain, performed mineralogical and metallurgical tests in 2009 and 2010 on the saprolite rock. Cyanidation results showed better than 92% recoveries on average.

Mid April 2011, Stronghold commenced a 15,000 metres diamond drill program on its 5,050 hectares Eagle Mountain property to both increase the size of the gold resource by step-out drilling and to upgrade a significant part of that resource from an inferred category to an indicated category by infill drilling.

It’s very encouraging that solid mineralization has been returned from several zones within the known deposit and from at least one zone outside the known resource.

Currently, the drill rigs have moved to another step-out area located higher up the mountain towards the North and Northwestern sides of the deposit. It’s important to drill at higher altitudes now, because the rainy season has started in Guyana and when it’s dry, there’s simply not enough water to drill in the higher areas.

Stronghold has a very attractive property of which the resource is being expanded with practically every hole drilled. Additionally, Eagle Mounatin contains gold mineralized saprolite rock at surface, which is easily minable. Gold extraction rates from this ore are higher than 92%.

Stronghold’s stock price is currently close to its 52-week low. If you haven’t bought any shares of this Company yet, this may be your one and only shot to buy them this cheap. Buy recommendation.