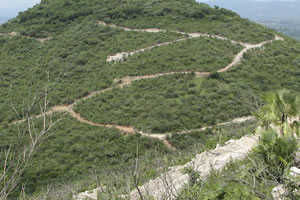 Part of the Cerro Jumil gold property in Mexico.

Esperanza Resources (EPZ – $1.30) announced analytic results of six more drill holes from the current drill campaign at its 100% owned Cerro Jumil gold property in Mexico. All six holes were drilled outside the known resource and four of them intersected gold mineralization between 0.90 and 3.86 grams of gold per tonne (see table at bottom).

Together with the positive analytic results from step-out holes announced in October, it’s fair to say that the current NI 43-101 compliant resource estimate for Cerro Jumil of 1.168 million gold equivalent ounces will significantly be expanded. An updated resource estimate, in which these results will be included, is expected mid-2012.

A Preliminary Economic Assessment (PEA), released in September 2011, and based on the above resource estimate, demonstrated that Cerro Jumil is a typical open pit, heap leachable mine with an estimated average production of 106,000 ounces of gold per year, which can be mined at $499 per ounce. Initial capital, including pre-stripping, is estimated to be US$114 million.

43 holes, totaling 8,236 metres, have been completed since the start of this drill campaign, bringing the overall number for Cerro Jumil to 49,818 metres. The on-going drill program was designed to both upgrade those areas now classified as inferred resource with infill drilling and to expand the resource with step-out drilling.

The most recent results were from step-out holes drilled on the Las Calabazas gold zone, one of the three principal and contiguous gold zones that currently comprise the gold resource. Mineralization has now been extended an additional 100 meters down dip at Las Calabazas.

At the beginning of 2012, the drill rigs will be moved to the Southwest Extension area (see the big black arrow on the map of Cerro Jumil below) as well as to the Colotepec target zone. If mineralization is found in these extensive areas, it would be a another major step forward for Esperanza.

Because the PEA was so positive for Cerro Jumil, Esperanza has decided to complete a Bankable Feasibility Study by the end of 2012. To that end, Esperanza will implement an extensive metallurgic program to decisively examine various processing alternatives.

For the PEA two methods of heap-leach gold recovery were evaluated. In the first method, the mined rock was crushed to a maximum size of 55mm (approx. 2 inches) and in the second method mined rock of more than 2 feet in diameter was directly fed to the heap leach pads.

A Feasibility Study is a report of the commercial and technical feasibility of mining and producing gold in significant quantities. Such study includes, in reasonable detail, an estimate of ore reserves; description of the suggested methods of breaking, haulage and extraction; description of proposed processing and waste disposal; an economic evaluation including an estimate of the capital expenditure requirements and operating costs and a comparative analysis of the effect of various assumptions, financing costs, operating costs and taxation; and an estimate of operating levels, environmental costs, shutdown and reclamation costs.

Global Minerals (CTG: TSX), of which Esperanza owns about 32% of the shares outstanding, announced that field work for 2011 is nearing completion on its 100%-owned Strieborná silver/copper property in Slovakia.

A compilation of regional information, along with geochemical and geophysical work, identified two additional attractive areas known as Cucma and Paca. All surveys are now being completed. Results will be evaluated in the coming months to identify drill targets for next year.

Drill results from Cerro Jumil continue to be good and they will undoubtedly expand the already significant resource of 1.168 million gold equivalent ounces. Moreover, Esperanza promptly moves the project forward and is in full preparation to begin a Bankable Feasibility Study.