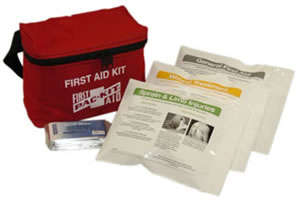 Pac-Kit, continues to excel expectations as it contributed $1.6 million in sales during the third quarter.

Revenues were especially supported by high demand in the first aid products category. A hurricane preparedness kit from PhysiciansCare, Acme United’s first aid brand for the industrial market, sold extremely well and is on re-order at this moment.

Also Pac-Kit, which mainly sells first aid kits and which was acquired in February 2011, contributed $1.6 million in sales during the third quarter. An unexpected advantage of the Pac-Kit acquisition is that PhysiciansCare is able to introduce its products to Pac-Kit’s existing customers. For example, PhysiciansCare shears are now sold to a Pac-Kit customer in the transportation market. Moreover, combined PhysiciansCare/Pac-Kit buying and sourcing capabilities have lead to better products and lower prices with suppliers.

Third quarter numbers were also positively impacted by strong back to school sales. In particular non-stick scissors and iPoint pencil sharpeners sold very well in the United States and Canada.

In Europe, sales slightly decreased due to the timing of orders from mass market customers. These orders are expected to occur in the fourth quarter of 2011. The European segment did manage to become profitable thanks to cost savings it implemented a year ago.

In Europe, a large order for a Christmas promotion is expected, but hasn’t come through yet. Winning the order would immediately mean a solid profitable quarter for that segment. Furthermore, the Company expects continued growth in the Asia Pacific region and more cross-selling opportunities between Pac-Kit and PhysiciansCare.

2012 appears to become an exceptional strong year as well. Acme will introduce products with even better non-stick coatings. Furthermore, the Company has several new products lined up like a new utility knife and a brand new iPoint pencil sharpener for high performance markets like offices.

Previous guidance numbers for fiscal year 2011 of $70 to $75 million in sales and $1.00 to $1.05 earnings per share, are well within reach, but actual results will depend on Christmas season sales. Overall, Acme United will have had a strong year with solid growth in a tough environment.

Mainly thanks to it’s investments in high quality, innovative products, the Company is opening up new distribution channels and is gaining market share worldwide.