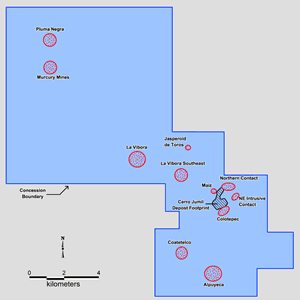 Next to the current deposit (circled in blue), the Cerro Jumil concession reveals 11 additional target areas that warrant further exploration (circled in red).

In September 2011, a Preliminary Economic Assessment (PEA) was published for Cerro Jumil, the most advanced property of Esperanza Resources (EPZ – $1.32). Based on a resource estimate of 935,000 gold equivalent ounces in the measured and indicated categories, and 252,000 gold equivalent ounces in the inferred category, the PEA describes the property as a typical open pit, heap leachable project with an estimated average production of 106,000 ounces of gold per year, which can be mined at $499 per ounce.

Making it a technically straight-forward and economically viable project with a Net Present Value of $309 million at a gold price of $1,700/oz. Moreover, the resource estimate will most likely be increased as first analytic results from an ongoing 15,000 metres drill program show additional mineralized veins between 1.00 and 3.85 grams of gold per tonne.

The Strieborná property is 100% owned by Global Minerals Ltd. (CTG: TSX), which in its turn is 28% owned by Esperanza Resources. In April 2008, an NI 43-101 technical report was published on Strieborná that includes 1.9 million tonnes in the Measured and Indicated category grading 231.7 g/t silver, 1.1% copper, and 0.7% antimony and 1.5 million tonnes in the Inferred category grading 180.0 g/t silver, 0.9% copper and 0.7% antimony. Right now, the property is being prepared for underground drilling to expand the resource.

EPZ has a diverse management team with decades of experience. Mr. Pincus, the Company’s CEO, oversaw the exploration and feasibility of the 155-million-ounces Pirquitas silver deposit in Argentina. Furthermore, it has several skilled explorationists on board. Dr. Bartos is responsible for the discovery and development of San Bartolome, a 150 million ounces silver deposit in Bolivia. And Mr. Bond was instrumental in the discovery and exploration of the Pirquitas deposit as well as the West Chance (Sunshine Mine) and Esquel deposits.

With $23 million in its treasury, Esperanza is sufficiently funded to continue the development of its properties and to bring Cerro Jumil into full feasibility in the course of 2012 with the ultimate goal of advancing the property to production. We reiterate our buy recommendation for Esperanza Resources with a price target of $3.36, or 124% higher than today’s 30-day average stock price. The target price has potential for upward revision when additional results are announced.