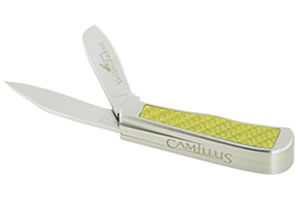 The Yello-Jaket is historically one of the most popular Camillus knives ever and has now been reintroduced.

Acme United acquired The Pac-Kit Safety Equipment Company late February 2011, a manufacturer of first aid kits for the industrial, safety, transportation and marine markets. Pac-Kit is expected to contribute between $4 and $4.5 million in sales and between $100,000 and $150,000 in earnings for fiscal year 2011.

Next to Pac-Kit, I expect to see substantial growth from the two new lines of Clauss gardening tools over the coming years. The garden tools market is over $200 million in North America alone. I’m very positive that Clauss will capture a good piece of that pie.

Additionally, the Company announced measures to make the European segment profitable: prices were raised and expenses were reduced by about €400,000.

Also, Acme has intensified its focus on the Asia Pacific region for both sales and manufacturing. Dennis Liang was promoted to Vice President of Sales for the region and he will manage direct import sales to all Acme United’s global customers and he will direct resources and his full time attention to increasing Acme’s revenues in Asia. Acme also hired YB Pek as Vice President and General Manager for Asia Pacific. He will help Acme to get products developed faster with higher quality and to get to the market faster with better prices.