While there are several culprits for the earnings decline, the major one is softer than anticipated back to school sales at big box brick and mortar retailers. Especially a large Westcott sharpener promotion in 2016 that didn’t repeat this year impacted the top line. And while Acme experienced outstanding online sales growth, it didn’t entirely offset the sales decline at physical stores.

The second reason is the Company’s booming online sales, which have been growing in excess of 100% annually for the past three years. The drawback of significantly stronger online sales however, are higher logistics, warehousing, handling and shipping expenses. More specifically, Acme experienced smaller and more frequent orders, and shorter lead times during the past few quarters.

These issues were initially addressed by hiring more personnel to fulfill the orders. But during the third quarter, Acme also upgraded its warehouse management software, installed additional pick and pack locations, and optimized its package sizes. All of these efforts had a negative impact on expenses.

A third and final reason for the earnings decrease, is the three major hurricanes that hit the U.S. and the Caribbean in September. They clearly impacted Cuda fishing tools and Camillus sporting goods sales in the southeast.

Despite these softer than anticipated sales and earnings, Acme United’s stock price closed up more than 4% on the day these numbers were released. Also the trading volume that day was eight times higher than the average. Possibly some institutions were waiting for a lower price to buy into the stock.

The current fourth quarter looks very strong. The Company forecasts sales growth in excess of 20% and substantially more in earnings. The growth is especially coming from the first aid area, which is receiving orders from the American Red Cross and Federal Emergency Management Agency (FEMA). In addition, there will be a sizable first aid holiday promotion in the fourth quarter at a major US retailer.

Other promotions are scheduled with Camillus knives worth in excess of $1 million and Cuda fishing tools. Moreover, the Company sees continued strong online sales during the first weeks of October.

Consequently, Acme expects to achieve its seventh consecutive year of record sales in 2017. However, due to the sales shortfall in the third quarter and the higher costs to adjust its warehouse to online sales, Acme expects annual earnings to be below last year’s. Therefore, the Company has adjusted its guidance for 2017 to $133 million in revenues, $5.6 million in net income, and $1.48 earnings per share. This is down from the previous guidance of $137 million in revenues, $6.7 million net income, and $1.76 earnings per share respectively.

The order and fulfillment patterns for online sales however are profoundly different compared with brick and mortar store sales. With online sales, Acme is receiving orders that closely match the timing of actual purchases by end users, which puts pressure on securing enough inventory without having to air freight it.

Furthermore, the Company is incurring additional warehousing and logistics expenses due to the higher number of small packages and frequent shipping.

Acme is addressing these costs with new software, improved warehouse layouts, optimized packaging, and better freight rates. During the fourth quarter, it will be installing a mezzanine in its Rocky Mount, NC warehouse to move more high volume products closer to the shipping locations. And next year, it will install new location software to optimize efficiency. These steps are expected to improve productivity quickly.

Finally, Walter Johnsen, the Chairman and CEO of Acme United, mentioned during the third quarter conference call that he was in China to try to shorten the supply chain so that products can be delivered faster when ordered.

Exact revenues per segment for the third quarter will be available in the 10-Q, which will be filed the first half of November. However, Acme announced for each segment the percentage by which revenues increased or decreased compared with last year’s third quarter. Based on those numbers, we can give a fair estimation.

In the U.S. segment, net sales for the quarter ended September 30, 2017 increased 5% compared to the same period in 2016. Net sales for the first nine months of 2017 grew 2% over the comparable period in 2016. Soft back-to-school sales, along with a large promotion in the second quarter of 2016 that did not repeat this year, affected growth for the nine months. Spill Magic, which was acquired in February 2017, contributed $1.8 million in net sales in the third quarter, and $4.8 million year to date.

Net sales in Canada for the three months ended September 30, 2017 increased 5% in U.S. dollars and were constant in local currency compared to the prior-year period. Net sales for the nine months ended September 30, 2017 decreased 2% in U.S. dollars and 1% in local currency compared to the same period in 2016.

Net sales in Europe for the three months ended September 30, 2017 increased 15% in U.S. dollars and 8% in local currency compared to the same period in 2016. Net sales for the nine months ended September 30, 2017 increased 18% in both U.S. dollars and local currency compared to last year’s period. The sales increase for both periods was primarily due to new business in the office and sporting goods channels as well as sales of DMT sharpening products.

Although it is not of the same magnitude as in the United States, the importance of Amazon.de – the German sister website of Amazon.com – is significantly growing in Europe as well. In fact, Amazon.de will be the number one or number two customer for Acme United Europe this year.

The Company’s long-term debt less cash on September 30, 2017 was $38.9 million compared to $33.4 million on September 30, 2016. By year-end, that number is expected to decline again. This will mainly be achieved by a reduction of bank debt as inventories return back to more normal levels after the back to school season.

At the end of the third quarter of 2017, Acme had close to $64 million in working capital and an impressive current ratio of 5.57.

In other news, Acme acquired the First Aid Only manufacturing and distribution center in Vancouver, WA at very attractive terms. The option to purchase the facility was part of the First Aid Only acquisition that the Company completed in 2014.

Built in 1993, the property consists of 53,000 square feet of office, manufacturing, and warehouse space on 2.86 acres. Acme paid $4 million for the property, which is inexpensive, knowing that it was recently appraised at $6.25 million. 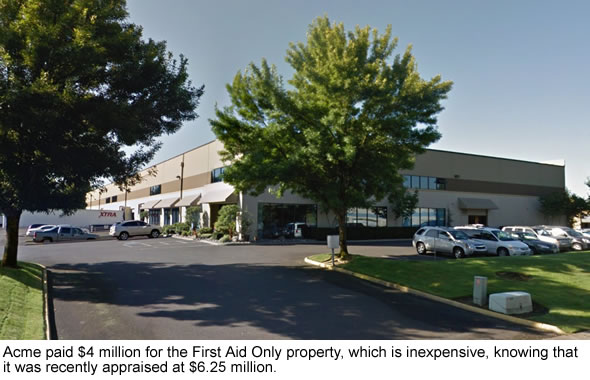 The purchase was financed by a variable rate mortgage at 3.74%. This will result in an annual interest expenses of $150,000 while that annual rent before the purchase was $407,000.

Walter Johnsen said, “The commercial real estate market today in Vancouver, Washington is strong, and the purchase represents an excellent value for our shareholders. We expect savings to begin immediately.”

Acme’s online sales are growing very rapidly, particularly at Amazon, and also at Jet, which is part of Walmart. The Company has a team working exclusively on online content, reviews, and search optimization. This is paying off. In particular, the first aid area and the Westcott business are performing strong online.

However, Acme faces several challenges with online growth. One of them is to maintain, or even grow, its market shares across all major product lines, while the shift from retail stores to online is in full force. Acme is succeeding very well in this endeavor, while many others are struggling.

Overall, the business in the fourth quarter looks good, with forecasted growth for Camillus, Cuda, and Westcott. Also the first aid business continues to do very well. For example, a major new contract for SmartCompliance cabinets was recently landed.

Acme’s strategy to refill these kits through the internet is contrary to service people in delivery vans who will typically go into different locations to fill the first aid kits and then come back on a regular basis. The latter is obviously a time consuming and very expensive model, as the cost of the individual sales staff, the truck, the employee, and benefits have to be taken into account. Consequently, Acme United is clearly gaining share in this $600 million market segment.

In addition, the Company has recently doubled the productive capacity at DMT. The brand is growing in the United States and in Europe. And it has simplified production at Spill Magic, which increased the output.