News » +$20 Million In The Bank And Booming Sales

+$20 Million In The Bank And Booming Sales

The relationship that EnWave Corporation (CA: ENW – $2.37 & US: NWVCF – $1.76 & GER: E4U – €1.62) has established with Aurora Cannabis Inc. (ACB-TSX) this week became even more meaningful. Aurora has opted to exercise its option for exclusivity using REV processing for cannabis throughout South America (except in Peru). This option for South America was part of the agreement reported in April 2019 when Aurora entered into a royalty-bearing commercial license for REV technology. Aurora was granted exclusivity for Europe (except in Portugal), along with a non-exclusive sub-license in Canada. The arrangement also involved a major REV equipment purchase.

As a producer of recreational and medicinal cannabis with operations in many countries worldwide, Aurora is a leading player in the sector and has made a significant commitment to utilize REV machines as an advanced processing option to rapidly dry cannabis.

In this latest deal Aurora has also agreed to an equipment purchase, involving a large scale 60kW commercial REV unit. The machine will be installed and operated in South America for extraction of THC and CBD, as well as production of cannabis derivative products.

With the most recent license agreement now signed, Aurora has locked up processing capacity using REV machines for a large part of its worldwide production base. These contract arrangements have included the sale of several REV machines, which will lead to a substantial long term royalty stream for the Company through this partnership with Aurora.

Originally drawn to REV processing as a more efficient means of processing cannabis, Aurora has reported that the REV machines allow for precise control of moisture content in dried cannabis that contributes to superior processing for CBD extraction. The process may be operated continuously and at a low temperature, and is completed in a few hours. Other production options require several days to end up with a comparable end result.

Aurora has established the reputation as an innovator to embrace new technology in the pursuit of the highest quality products. This leadership role for Aurora has elevated REV processing to become the premium technology for cannabis processing and CBD production. A commitment to innovation was also driving the decision to participate in an intellectual property agreement with EnWave whereby Aurora will investigate other advancements to increase efficiency and develop new applications using REV machines within the sector. 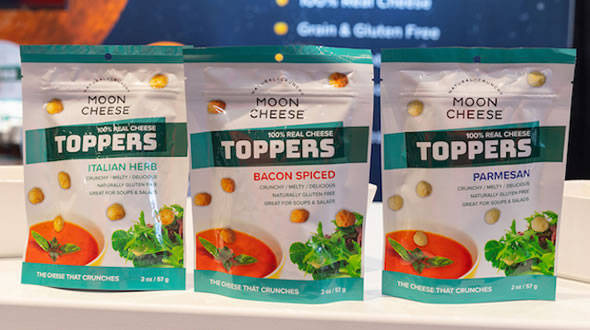 NutraDried began distributing its new premium salad topping called Toppers to Walmart in Q2 2019 with over 2,000 locations around the U.S.

A second major news item was announced this week as EnWave reported its financial results for its second quarter of FY 2019 ended March 31, 2019. While the numbers were encouraging across the board, a significant increase in revenues provides an indication of how successful the Company has been to continue with sales growth. In fact, the net revenue total of $8,773,000 during the quarter more than doubled the revenue achieved in the same period of 2018. Sales gains were led by market gains for the Moon Cheese brand, and additional sales of REV machines during the quarter also contributed to the record revenues.

Gross profit of $3.12 million was reported for the quarter, which also represents more than double the milestone achieved during Q2 of 2018. This achievement was more notable given that operating margins are improving and the Company earned a profit margin of 36% in the quarter. In tandem, rising EBITDA in 2019 was reported, demonstrating that EnWave has generated stronger cash flow from operations in the latest quarter.

As part of the investment to win new sales contracts, expand on infrastructure and build further growth, the Company has incurred increases to its cost of sales and General & Administration Expense items. This included hiring talented senior staff members and the participation in promotional activities to build market awareness of REV technology and support sales. As a result, EnWave reported higher Sales & Marketing expenses of $1,084,000 this year, compared to $683,000 for the same period in 2018. Meanwhile G&A increased to $1,049,000 compared to $606,000 for the prior year.

The trend of rising sales was partly offset by the increased expense items, leading to a consolidated net loss for the quarter of $224,000. More importantly, this is a much lower loss than the $519,000 reported last year and the improvement indicates that positive sales momentum is paying off. With losses reduced by more than half one may conclude that the next milestone objective for EnWave to report an overall net quarterly profit is drawing closer.

One other item of consideration that suggests financial strength is the clean balance sheet at the end of the quarter, with a cash position of more than $12 million and no long term debt. For an emerging growth story this presents a much lower risk profile than many similar small cap stocks. The capital position was further strengthened by a direct equity investment by Aurora Cannabis immediately after the quarter, raising a total of $10 million.

Positive items documented in the earnings report included an update on the breakthrough sales agreement in the cannabis sector with Aurora that contributed to the stronger revenue totals, along with several other equipment sales and agreements in other sectors. The Company continues to achieve progress working towards significant sales initiatives with other potential clients including advanced testing and product development underway with the US Army and its approved supplier network.

As the halfway point in the fiscal year has been completed with the publication of second quarter financial results, EnWave has demonstrated that the ambitious sales objectives for 2019 are entirely reasonable and achievable. Moon Cheese sales are booming. In addition, NutraDried began distributing its new premium salad topping called Toppers to Walmart in Q2 2019.

A steady stream of positive news items has led to exceptional gains for shareholders and the stock nearly doubled in price since the start of its fiscal year. This performance ranks EnWave among the best small cap stocks so far in 2019 and there appears to be room for further gains ahead.

The agreement with Aurora Cannabis is one such partnership that appears to have great promise to build significant royalty revenue. The confidence in the partnership with Aurora is also illustrated by the decision for that company to take a direct equity ownership interest in EnWave shares. In addition, the injection of working capital from that deal has greatly improved the already strong financial position of the Company.

EnWave is on track to continue its winning streak and will once again set the bar higher with annual record revenue and cash flow numbers. Achieving a record in both revenue and gross profits is commendable but to more than double the previous quarter for both metrics is a sign of exceptional performance. The pipeline of new sales prospects remains primed for further contract wins, and the product lines under development and currently marketed by its license partners worldwide show great promise for additional sales growth ahead.