Three units will be installed at a new 30,000 square foot (~2,800 square metre) growing facility in central Massachusetts. They will provide 450 refrigeration tons of year-round cooling. This is Tecogen’s third sale into the nascent cannabis industry of Massachusetts.

The three other TECOCHILLs will be shipped to the Tampa, FL region where they will provide 450 refrigeration tons of cooling for a 40,000 square foot (~3,700 square metre) growing facility, which is being retrofitted out of an existing facility. This marks Tecogen’s first sale into Florida’s recently legalized medical marijuana business and the Company’s sixth transactions with the indoor cannabis industry in total.

Tecogen is dramatically expanding its reach into the indoor agriculture industry, and most significantly cannabis. The success of Tecogen’s chiller in the booming, but soon to become highly competitive, cannabis market is no coincidence.

In order for the crops to properly grow, they require an enormous amount of energy. A 5,000 square foot indoor cannabis facility will use on average 29,000 kilowatt hours (kWh) of electricity monthly, while a local household consumes about 630kWh, making the marijuana industry one of the nation’s most energy intensive.

Exactly for this reason, the TECOCHILL is exceptionally useful, as it consumes virtually no electricity thanks to its natural gas powered engine. All in all, it lowers a building’s cooling costs by 30 to 60 percent, by eliminating most of the electrical demand (kW) associated with providing cooling. 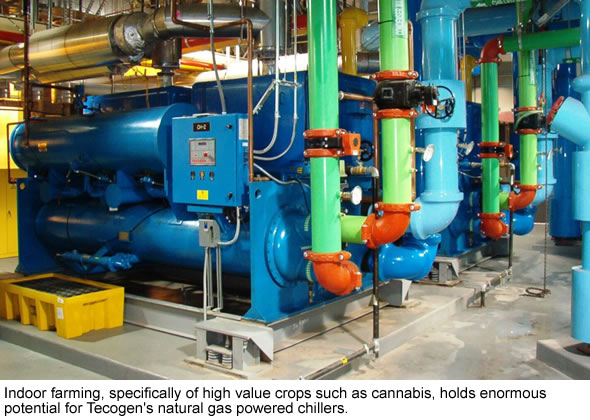 Another advantage of the TECOCHILL running on natural gas is that it helps customers avoid expensive and generally time consuming electric service upgrades when they are retrofitting an older building into a growing facility. In most cases, dated buildings do not have the electrical infrastructure needed to support the immense electrical needs required by both the lighting as well as the HVAC (Heating, ventilation and air conditioning) system necessary to remove the heat generated by the lighting.

In addition, the chillers offer optional “waste” heat that is available whenever it is running. The free engine heat can be recovered and used to offset boiler gas that would have been needed to meet the dehumidification requirements.

Moreover, the units will be equipped with Tecogen’s patented Ultera system. Thanks to this cutting-edge emissions control technology, the carbon dioxide (CO2) from the cleaned exhaust stream can be used as fertilizer to improve growing conditions. It is noteworthy that plants grow by converting the CO2 that’s found in air to carbon through photosynthesis, and greenhouse plants absorb even more CO2 because of the artificial lighting. Without the use of an Ultera, the exhaust stream would not be clean enough to recycle as CO2 fertilizer, an important feature only TECOCHILL offers.

Finally, state-based incentives for natural gas-engine driven chillers are a boon for facilities across the Northeastern states. In Massachusetts, for example, an incentive of between $0.25 and $0.30 per kilowatt hour that is removed from the grid, is provided. Other states, such as Connecticut, New Jersey and Pennsylvania also offer incentives for similar installations.

The three TECOCHILL units in both Massachusetts and Florida are expected to reduce operating costs by 50% while providing an approximately equal reduction to the facility’s carbon footprint (relative to conventional electric chillers).

So far, the cannabis industry has gone through the typical pattern for new gigantic industries. It started in 2014 with the initial bubble where investors were wildly enthusiastic about marijuana being decriminalized. Consequently, tens of millions of investment dollars flooded into the industry, driving valuations of companies sky high. Subsequently, the inevitable decline followed as investors realized everything was not yet rosy, from banking issues, to taxes and legal matters. Now with more States in the US and other nations worldwide decriminalizing marijuana it is set for its resurgence and definite breakthrough.

To date, a total of 29 states, the District of Columbia, Guam and Puerto Rico allow the use of cannabis for medical purposes.

Nearly twenty other countries have legalized cannabis possession and consumption to some degree (primarily for medical purposes), including Canada, Switzerland, Croatia, Czech Republic, Colombia, Jamaica, Italy, Spain and Uruguay, to name a few. Also Germany and Australia have recently passed legislation authorizing the use of cannabis for medical use.

Indoor farming, specifically of cannabis, holds enormous potential for Tecogen, as utility costs are the single biggest operating cost for these facilities. In general, electricity represents roughly 30% of the total cost of a cannabis operation.

Another advantage for Tecogen is that given the expected growth of the industry, it is going to get competitive for growers very quickly. To date, some 240 applications to grow and sell marijuana have been submitted in Massachusetts alone. Once the price per pound starts to decline as more growers enter the market, only those who truly have a handle on their energy cost and usage will be successful.

Consequently, it is fair to say that due to the exceptional cost savings that are generated with Tecogen chillers, the units are becoming a necessity in the competitive cannabis industry.

Importantly, this is not just the case for cannabis. Growing leafy greens, herbs, and tomatoes also holds substantial promise for Tecogen. According to a study done by indoor farming software company Agrilyst, the amount of physical space dedicated to indoor farming globally is set to jump at least five-fold over the next five years with the potential to generate over $6 billion in incremental annual indoor farming revenue. Recommendation BUY.