The Company’s German subsidiary ROB Cemtrex GmbH (www.robcemtrex.com), consists of four distinct operating companies, forming a complete electronics design, manufacturing, assembly, and cabling solutions provider that serves the electronics and cabling needs of some of the largest companies in the world in the medical, automation, industrial, and renewable energy industries. It has facilities in Neulingen, Germany and Sibiu, Romania.

The second subsidiary is Griffin Filters (www.griffinfilters.com). It has been a leader in fabric filter dust collection and other environmental control products for over 50 years. Griffin has installed over 25,000 dust collectors worldwide with some of the largest major fortune 500 companies. It offers shaker-style filters for the concrete, aggregate and construction industries and custom engineered pulse jet filters for a wide variety of industries such as cement, plastics, chemical, power, steel, food and minerals. 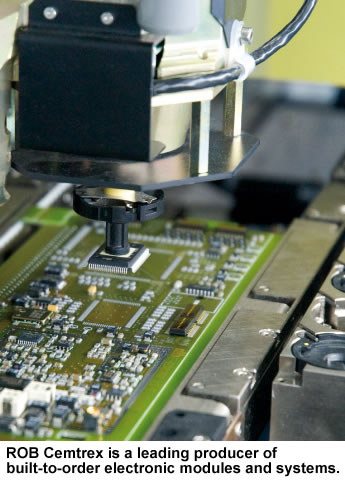 ROB Cemtrex, or ROB Group as it was called when it was acquired in October 2013, is Cemtrex’ main growth driver. It was acquired for approximately $5.6 million, half of its book value at the time and it was doing approximately $30 million in sales in calendar year 2013. Note that Cemtrex recorded $13.6 million in total revenues in fiscal year 2013, ended September 30, 2013.

Cemtrex was able to pick up ROB for only $3,133,286. These were extremely favorable terms because the German company was in an insolvency situation due to a customer defaulting on a large amount of receivables. The insolvency situation is now in the company’s history and it has insured all future orders and receivables by a major insurer to protect itself from this occurring again. To pay for ROB, Cemtrex used a non-dilutive bank loan, which carries interest of 4.95% per annum and is payable on October 30, 2021.

Cemtrex’ management is confident in the ability of ROB to continue growing the operation back to its previous heights of $60 million in revenue, which it achieved in 2010.

Mainly thanks to the ROB acquisition, Cemtrex was able to announce significantly improved sales and earnings for its fiscal year 2014, ended September 30, 2014.

Commenting on the yearly results, Mr. Saagar Govil, Chairman and CEO of Cemtrex remarked, “This has been a tremendous year for us as we have experienced unprecedented growth. We are pleased with the results of fiscal 2014 and look forward to continue taking the Company to greater heights in 2015.

At today’s share price, Cemtrex is trading at a P/E of around 9.9, which is less than half the average valuation of its peers in the Industrial Goods sector according to Yahoo Finance.

Not only the Company’s ROB subsidiary is in excellent shape, also its environmental business may get a significant boost the coming years thanks to a gradually increasing public and state awareness of the issues surrounding air quality. Over the past years, the Company’s ability to create substantial growth in its environmental division was often hindered by stricter regulations that were postponed because the industry cried it was going to increase costs and jobs would be lost.

Now thanks to the recent agreement between the United States and China to reduce their CO2 and greenhouse gas emissions, there finally might be a turnaround. These two countries together account for approximately 45% of the world’s greenhouse-gas emissions, and their agreement is likely to energize talks about reducing emission worldwide.

As a matter of fact, in October 2014, Cemtrex announced greater proposal activity in its Continuous Emission Monitoring Systems (CEMS) business. Ravi Narayan, Vice President of Cemtrex, cited several reasons for increased activity including, (i) U.S. cement plants will need to upgrade their CEMS over the next two years to measure mercury, hydrocarbons, Hydrochloric acid (HCl) and particulate, (ii) Coal-fired power plants also have to measure mercury, HCl and organics due to pending air toxic rules,(iii) and expanding CEMS market to measure greenhouse gases including Carbon dioxide and methane due to global warming.

The processing of the frac sand results in air pollution, including post wash drying of the sand, screening, loading and unloading of railcars, barges and trucks. The silica and fugitive dust particulate emissions are controlled by the high efficiency proprietary baghouse filters, which Griffin Filters provides for maximum control. Griffin bag filters decrease safety concerns for the operators of the frac sand trucks through elimination of dusty, hazardous breathing conditions. Griffin Filters has seen that the frac sand mining industry along with the logistics trans-load points as a major growth area for its baghouse filters.

Saagar Govil commented, “We received several significant orders and are now witnessing increased inquiries in this market. We have a strong relationships with many customers in this space and a considerable history of providing durable, efficient industrial air filtration systems. We’re confident we can grow in this space.”

Cemtrex is led by an eager management team that wants to move the Company forward with organic growth and complementary take-overs. After the acquisition and integration of the ROB Group, it continues to look for other attractive targets.

Management is focused on acquiring a controlling a stake in companies that can add additional strategic or competitive value to their existing operations. They’re aided in that search by the cash that the Company is generating and by low interest rates, in case they need to borrow money to finance the take-over.

As stricter environmental regulations were often postponed by governments in the past, it was an excellent move from Cemtrex’ management to diversify its capital into other areas. ROB Group was a good fit and opportunity. As a result, the Company now has two independent sources of earnings instead of being solely exposed to the conditions of one industry.

Next to ROB group, which generates significant income, the environmental business’ future may also become much brighter with the US and China agreeing about cutting CO2 and greenhouse gas emissions.

Finally, Cemtrex is a fast grower, while its stock is trading at a P/E of less than 10. It won’t stay this low-priced forever, so we advise you to take advantage of this opportunity.