A recurring storyline to the various projects under exploration by Renforth Resources Inc. (CA:RFR – $0.06 & US:RFHRF – $0.04 & GER:9RR – €0.03) is the proficiency to achieve new discoveries within areas that had been overlooked by previous operators. This is due in part to the technical skills of the geological team that is directing the exploration programs. It is also driven by the tenacity to review all available historic exploration data, both for the project areas and from nearby mines and deposits.

The Cadillac Break is considered a treasure trove of mineral wealth extending laterally from eastern Ontario through western Quebec. Many highly productive mines are clustered within this corridor of favorable geology. There is much that can be learned from the results of other players. Renforth reconsiders all previous geological interpretations and employs a creative approach with the willingness to investigate new concepts. The philosophy is paying off with regular discoveries in areas that other geologists did not believe could be productive.

The Company’s Parbec project is attractive because the Cadillac Break extends right through the property. Drilling work completed for Parbec by the Company in 2018 targeted the Cadillac Break and successfully encountered gold zones as expected. However, Renforth also noted that deeper drilling had encountered gold in the sediments beyond the main structure. Subsequent 3D modeling of the drill holes indicated the presence of a previously unknown, parallel structure. This was subsequently confirmed with follow-up drilling work reported in June 2019. Renforth reported a diorite splay structure had been encountered that was indeed gold-bearing. The diorite vein itself was considered low grade, but alteration extending from the contact zone within the Pontiac sediments was found to carry attractive gold grades. This entirely new discovery zone was slated for further exploration. 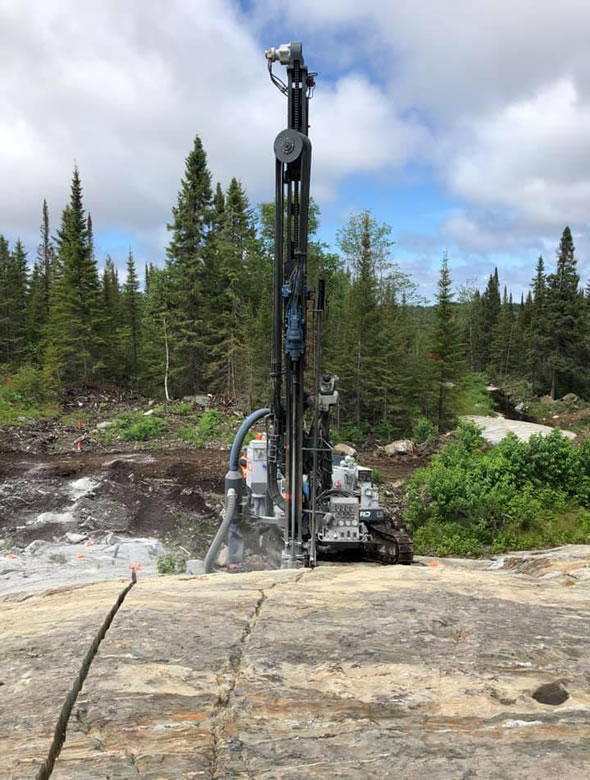 Renforth opted to invest in geophysical surveying to better define the potential. The Company proceeded with a Beep Mat survey to illuminate the new target area in June of this year. The Beep Mat was chosen because it was effective, inexpensive to complete and could generate results quickly.

The system performed as expected and Renforth attained intriguing results a short time later. This week, the Company reported that the survey extended the known strike of the diorite splay target to a length of 100 meters. Based on this data, trenching was completed along this section. Gold was immediately encountered at surface. Samples extracted from the trenches were highlighted by a section of 0.55m with an average grade of 2.35 g/t gold. Another section yielded an assay value of 1.68 g/t gold. A total of 19 samples were extracted from various locations of the area surveyed with Beep Mat technology.

Renforth believes the gold alteration hosted within the Pontiac sediments represents an important additional deposit area. The diorite splay zone is located roughly 100m to the south of the Cadillac Break. Previous drilling work has intersected this structure 75 and 200 meters below surface. The extent of the system remains open laterally and to depth. While some of this zone was opened for further investigation through surface stripping, other sections of the surface target are difficult to access.

The Beep Mat technology has proven its effectiveness to outline this structural target beyond where previous work had encountered the splay. The structure may now be illuminated below surface overburden, providing the opportunity to efficiently target future drilling efforts. Renforth is pleased with the results of this program and is now working to complete the survey over a wider section of the property.

Renforth originally chose to secure ownership of its Malartic West project based on its proximity to the Canadian Malartic Mine. Comprising a total area of 53 square kilometers, Malartic West is located immediately adjacent to the largest open pit gold mine in Canada, sharing the western boundary with Canadian Malartic.

Renforth was drawn to investigate possible extensions of similar gold mineralization within its own property holdings. And indeed there are already a number of gold showings that Renforth has identified from early stage prospecting on the project. However, additional leverage to other metals was also encountered. Historical data for the area indicated that six grab samples had been previously selected by SOQUEM, bearing attractive grades for copper and silver. The prospective copper/silver Beaupré target was an unexpected occurrence in this district known for gold.

During the summer of 2019, Renforth geologists completed follow up sampling work at Beaupré. Attractive copper and silver mineralization was reported. Assay values up to 3.59% copper and 6.62 g/t silver were highlighted. Renforth returned to the Beaupré target in the fall that year and extended the surface strike length of 165 meters. Again, high grade copper and silver values were encountered through sampling. However, the early onset of winter weather and snow cover prevented further investigation.

Earlier this month, Renforth announced that exploration work has now resumed at Malartic West. Beaupré represents a significant and compelling discovery target for the project. This type of mineralization is unusual for the district, but it warrants additional follow-up and may evolve into a very attractive deposit. The presence of this copper-silver alteration is a bonus discovery. Copper and silver prices are rising and Renforth has opted to advance fieldwork to better understand this potential.

Exploration activity is also continuing at the New Alger property. Recall that Renforth embarked on a new diamond drilling program earlier this month. The priority to advance exploration of the Discovery Veins target will involve step out drilling intended to extend the deposit area. Some infill drilling is also planned to increase the drill density between existing intervals. In total, 8 to 9 holes will be drilled. A beep mat survey was also just completed at New Alger. The Company is awaiting the results to incorporate additional data into the exploration plans.

Meanwhile, within the portion of the Discovery Veins that has been exposed through surface stripping, sampling was completed prior to commencing a mini bulk sample program. A total of eighteen bags of sample material (each weighing approximately 100 pounds) has been collected from the deposit at surface and submitted to SGS Laboratory for assays. This is a preliminary step to confirm grade. If the sample area is satisfactory, the Company will advance to the exciting prospect of extracting and processing a larger volume of the deposit.

Renforth also reports another partial closing of the previously announced financing. A total of $207,500 was received through the combination of flow through and common share units offered. A third and final tranche of this placement is expected to close shortly.

The strategic approach to value creation is once again highlighted through this latest update. Renforth currently has active exploration programs underway at three separate properties. The Company is employing new technology to more effectively and economically achieve results in the field. A focus to aggressively follow up on previous results ensures that each discovery breakthrough is pursued in the drive to build resources. And with the mini-bulk sample effort progressing, Renforth is advancing one of its discoveries towards establishing a viable open-pit mine candidate.

Renforth remains debt free and work is fully funded. The surge into record high spot price territory for gold will assist the Company to raise money. Another plus, all of the projects held are wholly owned and not subject to further earn-in spending requirements. This means Renforth may proceed based on its own exploration objectives to focus on the best opportunities for resource expansion.

With the stock trending at the top of its 52-week trading range it seems the progress is being noticed. The drilling work now underway at New Alger has the potential to build greater gold leverage to the currently defined deposit. The mini bulk sample may demonstrate economic potential for the surface resource zones.

At Parbec, the beep mat survey has proven its value as attractive new zones are being outlined for the diorite splay target. And at Malartic West and entirely new deposit target is under evaluation that could evolve into the next value creation story for the Company.

Renforth is one of the most active junior exploration stories in Canada. Each of the programs currently underway contributes to build shareholder value. With the confirmed bull market conditions attracting investor interest back to the junior mining sector, this is the right time for a story like Renforth to be in the field generating results. Smallcaps Recommendation: BUY.