Mr. Benjamin Locke CEO of Tecogen commented, “2018 was a transformational year for the Company. We adjusted our product mix and sales strategy to maximize our opportunity with our exclusive natural gas engine cooling technology; substantially improved the profitability of the ADG fleet; and made significant progress developing our Ultera emissions technology for fork truck and automotive applications. Our recent transaction strengthened our balance sheet and puts us in an excellent position to achieve our 2019 goals.”

Tecogen’s net income for the fourth quarter of 2018, exclusive of goodwill impairment, was $18,686 compared to an income of $268,981 for Q4 2017, a decrease of $250,295. Operating expenses excluding the goodwill impairment rose 7% with much of the increase being due to legal fees in connection with the acquisition of American DG Energy Inc, as well as selling expenses incurred from an increased focus on chiller sales. R&D expenses increased 3% for the quarter.

Backlog Has Skyrocketed In Early 2019 Due To Record Sales Announcements

This spike in backlog is largely due to two of the most significant contracts
the Company has signed to-date occurring over the last two months.

The increase in the office building segment (see chart below) is driven by the largest order in the Company’s history, the $8.3 million deal involving a charge generation system for a data center located in Manhattan office building. The contract announced three weeks ago is responsible for a large portion of the multi-unit residential segment. 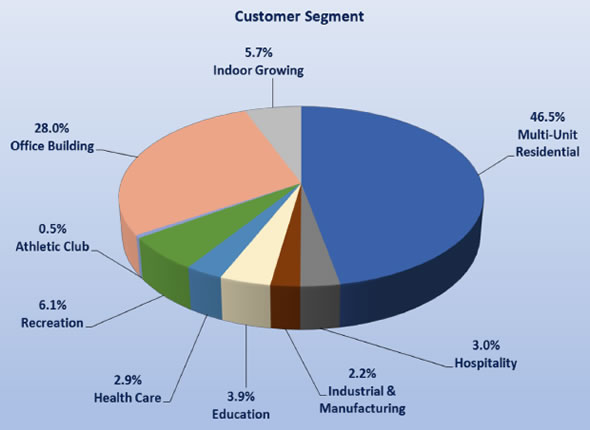 The most compelling part of this chart however, is be the indoor growing sector, which represents only 5.7% of all backlog but Mr. Locke decided to lead with this segment when discussing backlog. He stated on the call, ”We are continuing to aggressively promote our chillers for indoor growing facilities with crops such as fruit, vegetables or cannabis in some states. Our chillers are ideally suited to these facilities because of the low operating cost of the Tecochill chillers compared to electric chillers and utilizing the waste heat from our chillers for heating and/or dehumidification of the growth states. Our systems have become the design basis for several large growers who are planning additional facilities. I expect more orders for our equipment in this space in the coming months.”

Note that the backlog does not include recurring service contract revenues, nor does it include ADG’s estimated undiscounted future energy production revenue, which exceeds $50 million, stretching over the next 15 years. It also does not include any sales of the Company’s TecoFrost product that will be re-launched this year.

Moreover, on March 26, Tecogen announced a sale to an affordable housing senior living facility located in New Jersey involving four 200 ton STx Tecochill systems and one Tecopower 75 kW cogeneration unit. The equipment is expected to be installed and commissioned in time for the 2019 cooling season. In other words, backlog has substantially increased once again by this sale, and that revenue can be expected to be earned in the second quarter before the hot summer months begin.

The fourth quarter report and presentation was a mixed bag for Tecogen, although most of the “bad” is backwards looking with the “good” expected to come. While revenue and EBITDA declined, it is obvious that Tecogen is laying the groundwork for an excellent 2019 due to record contracts and tremendous increase to backlog along with an increase to gross margins in Q4.

Any increase to operating expenses should be more controlled as the costs associated with the American DG Energy acquisition have already occurred.

With greater stress on power grids as the urban landscape in New York and across North America gets denser, demand for Tecogen’s clean energy solutions will remain robust.

The chiller segment has strong current and future growth potential driven by the indoor agricultural market as cannabis gains national acceptance. The market appears to agree with our assessment of the quarterly result and conference call as the stock price remains strong at around $4.00, just the under 52-week high.

As the stock price remains fairly steady, existing shareholders can view the fourth quarter financial statements as one step closer to Tecogen achieving its goal of consistently profitable revenue growth. This makes it a prime candidate for a major run towards our target price on positive news or demonstrated profitability. We believe that this is possible in 2019 as sales backlog transforms into more record revenue numbers and profitability on subsequent quarterly results. Smallcaps Recommendation: BUY.