Tecogen Inc. (TGEN – $4.20), which designs, manufactures and installs industrial and commercial cogeneration systems, won a contract worth $1.4 million to install Combined Heat and Power (CHP) units at a federal prison in New York. This represents one of the Company’s largest orders to date.

The number of units that are going to be installed, nor the energy output that they’ll generate, was mentioned. However, judging from the significant contract value, it’s clear that several Tecogen CHP systems will be installed at the correctional facility. A CHP generally costs between $100,000 and $400,000.

The CHP’s microgrid software will ensure that all units operate in tandem, seamlessly balancing the facility’s demand. Similarly, in case of blackout, the sophisticated cogeneration systems can disconnect from the grid completely and operate in island-mode – ensuring the lights never go out and that everybody is safe.

The cogeneration equipment will also reduce the facility’s electric demand while recycling the engine’s waste heat for domestic hot water use. Compared with the old boilers, which will be taken out, the prison is likely to save hundreds of thousands of dollars annually. Note that a typical 100kW CHP unit will save the customer on average between $70,000 and 150,000 per year.

Moreover, the units will be equipped with Tecogen’s unique and patented Ultera system, which reduces emissions of harmful pollutants such as NOx, CO and HCs to near-zero levels.

Interesting to know is that the contract was awarded in a competitive bidding process by a national energy service company (ESCO) that Tecogen has worked closely with in the past. 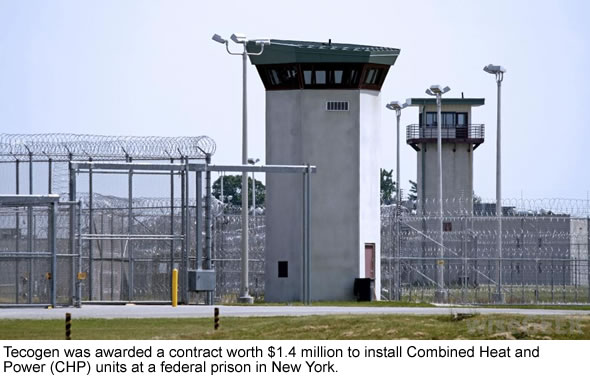 Relationships with ESCOs Paying Off Big

The Company’s strong working relationship with a growing number of energy service companies helps to secure a constant flow of new orders. In the past few months alone, several orders, worth millions of dollars, were awarded through ESCOs.

For example, a while ago, the Company received an order from an ESCO, valued at half a million dollars, for three 75 kW Combined Heat and Power units. The CHPs will soon be installed in three different schools in and around New York and New Jersey.

A few weeks earlier, another 75 kW cogeneration unit was sold to a state university in New England to meet the thermal and electrical demand of the athletic facility. This contract was awarded in cooperation with the same ESCO as the one that was announced this week.

In addition, Tecogen was awarded an approximately $2 million contract for the sale of multiple CHPs to a school district in Long Island, NY. The CHP systems will provide electrical power for the schools and supplement various onsite heating systems, resulting in significant cost savings as well as a reduced carbon footprint. Also this contract was awarded by a construction firm under subcontract by a large multi-national energy services company.

In other news, given the significant progress on many fronts that Tecogen has already made this year, the Company felt an interim update to its shareholders (pdf) was justified.

The letter gives a thorough overview of the Company’s achievements with its Ultera near-zero emissions control technology, both in the cogeneration and more recently the automotive market. It touches upon the recent introductions of the progressive InVerde 100e+ CHP and the Ilios line of gas heat pumps.

The letter also includes a roundup of TTcogen, the Company’s 50/50 Joint Venture with Czech CHP manufacturer TEDOM and how that has helped to quadruple Tecogen’s addressable market. Finally, the letter closes by giving a valuable overview of the future energy market in which Tecogen operates. A letter definitely worth reading for potential and existing shareholders.

This is obviously another significant contract win for Tecogen. The Company’s backlog will benefit and so will its revenues early next year, as the equipment is expected to be installed in the first half of 2017. Note that maintenance was not even included in the $1.4 million contract. That might become an added bonus down the line.

It’s clear that more and more organizations, such as universities, schools, building operators, and prisons are realizing that Tecogen’s natural gas powered cogeneration equipment can save them plenty of operating expenses, freeing valuable resources that may be re-directed toward the customer’s core mission.

Moreover, it’s great to see that Tecogen’s effort of building long term relationships with energy service companies is bearing fruit. We expect many more contracts in the coming weeks and months. Buy recommendation.