Tecogen (TGEN – $4.24), which designs, manufactures and installs industrial and commercial cogeneration systems, reported a positive net income for the first time in its history. During the third quarter, ended September 30, 2016, it generated net income of $207,868 compared to a loss of $948,842 in the third quarter of 2015.

This outstanding performance was achieved by a solid revenue increase, combined with strict cost control. All of this resulted in gross margin rising to 41.9% compared to 35.7% in third quarter 2015 and well above management’s targeted 35-40% gross margin range. In fact, this was the highest gross margin that the Company ever achieved.

Speaking about the turn to profitability, Benjamin Locke, Tecogen Co-Chief Executive Officer noted, “Tecogen has achieved a number of notable milestones of late, including the pivotal turn toward what we believe will be consistent profitability.”

The Company’s sales backlog of equipment and installations as of Monday November 7, 2016 was $13.1 million, driven by strong traction in the InVerde product line and Installation services. Note that the backlog does not include service contract revenue, which was more than one third of the Company’s revenues in fiscal year 2015. Judging from the backlog, which continues to be far above the Company’s goal of $10 million, it’s clear that the order pipeline is chock-full. 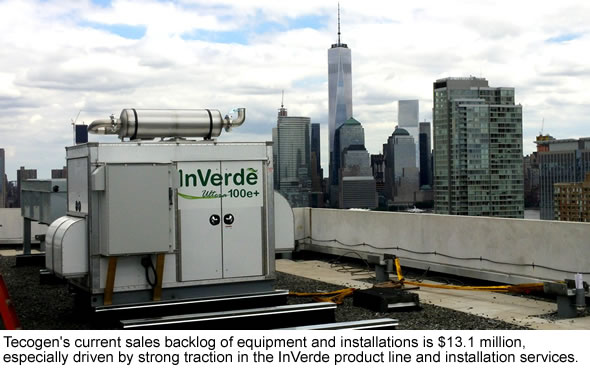 Not only is the core business performing exceptionally well, Tecogen also has lots growth initiatives. TTcogen for example. During its first full quarter of operation, the joint venture with Czech CHP-manufacturer TEDOM, coined TTcogen, made steady progress toward building product awareness and establishing relationships with key partners. Initial sales were focused around the smaller 35kw CHP system, but larger megawatt system sales are expected down the line.

We also expect a lot from the research contract that was awarded to Tecogen by the Propane Education & Research Council (PERC) to develop Ultera for the propane powered fork-truck market. The project will assess the adaption of Tecogen’s technology for the category in collaboration with select leading fork truck manufacturers – ultimately with the goal of developing an ultra-clean propane fork truck offering a robust indoor air-quality advantage without compromising vehicle performance.

And as the potential icing on the cake, Tecogen’s other joint venture ULTRATEK, which was formed to test, verify and develop the Company’s Ultera near-zero emissions technology for automotive applications, recently successfully completed Phase 2 testing. Results will be presented next year at the prestigious SAE International event. The value of this potentially groundbreaking emissions control technology was demonstrated in recent third round funding for the joint venture that recently valued ULTRATEK at $58.2 million.

Although Tecogen engineers were confident that the Company’s near-zero emissions technology Ultera could be applied to other engine categories, such as vehicles, there was not a clear need for the application in the mobile engine market …until recently. It all changed last fall with revelations of widespread emissions cheating by the automotive manufacturers, most notably Volkswagen in their diesel products.

Tecogen recognized the opportunity and formed Ultra Emissions Technologies Ltd. (“ULTRATEK”) in December of 2015 to pursue the develop of the Ultera for gasoline vehicles. Gasoline vehicles, while not implicated in the cheating scandal, have been included in the larger problem of being certified in tests that underrepresent their true on-road emissions levels. In fact, European regulators are now implementing on-road, real-world driving tests for vehicle emissions compliance – the United States is considering similar testing standards.

During Phase I testing on a light-duty vehicle, conducted in April 2016, Ultera delivered a stunning 94% reduction in carbon monoxide (CO) and an 84% reduction in non-methane organic gasses (“NMOG” – the pollutant that reacts with NOx to produce ozone).

As a result of these highly encouraging Phase I results, Phase 2 testing on a broader range of vehicles commenced in September of this year. This phase was concluded late October and was successful in accomplishing its goals with an Ultera device that was even more accurate than the unit used in Phase I. According to the Company, the tests have provided plenty of data showing the system’s effectiveness.

The next step for ULTRATEK is to compile the test date and prepare a paper, which will be presented at the prestigious SAE conference in April 2017.

SAE International, with more than 127,000 members globally, is a U.S.-based, globally active professional association and standards developing organization for engineering professionals in various industries. Principal emphasis is placed on transport industries such as automotive, aerospace, and commercial vehicles.

The SAE paper is a significant validation of the tests. After all, the most important aspect of negotiating with an automotive component supplier or car manufacturer is to make sure that the test data is unassailable and verified.

Last week, Tecogen announced that it would acquire American DG Energy (ADGE), which offers On-Site Utility energy solutions without any capital or start-up costs to the customer and at lower costs than charged by conventional energy suppliers.

When the acquisition is completed, which is expected in the first half of 2017, Tecogen will be able to offer a cost-free-installation option to customers that don’t have access to financing, or that are not interested in owning and maintaining the equipment.

Noteworthy is that when combined, approximately half of Company’s annual revenue will be derived from stable, long-term contracted sources (Tecogen Service revenue and American DG Energy revenue). This revenue base will provide a reliable funding source for both operating expense and growth initiatives, while also making Tecogen’s revenue profile more predictable, as the revenue volatility caused by somewhat cyclical equipment sales and installations is reduced.

Another major advantage of the acquisition is that there will be plenty of cost saving opportunities. For instance, the combined companies are expected to benefit from approximately $1 million of general and administrative cash savings as duplicative functions are eliminated. Also, the merged companies will allow for more efficient deployment of service technicians thanks to Tecogen’s wide service network. In addition, a consolidated inventory will improve purchasing economics and shipping costs.

Finally, Mr. Locke mentioned during Tecogen’s third quarter conference call that the acquisition of American DG will be accretive.

Product sales revenues grew 53.2% over the prior year comparable quarter. Higher cogeneration product sales delivered the entirety of this growth, partially offsetting a year-on-year decline in Chiller & Heat Pump sales. Note that no less than ten chillers and heat pumps are currently included in the backlog.

Also Services revenues continued benefiting from increasing penetration in service contracts and favorable operating metrics for the installed fleet. Services revenues grew 33.8% in the third quarter, compared with Q3 2015. It is expected to continue to develop as an important revenue stream.

Tecogen’s balance sheet remains solid. Cash was reduced to a little over $3.5 million, but that was due to the $2.7 million rise in Accounts Receivable, as a consequence of the large number of machine installations lately.

Becoming profitable is always a major turning point at a company. It’s no different at Tecogen. But let’s be clear, despite its significantly improved financial results, the Company has only started scratching the surface of the huge clean energy market.

The acquisition of American DG Energy will create a vertically integrated Company able to offer complete end-to-end clean energy solutions, including financing. Moreover, the addition of American DG’s energy revenue stream to Tecogen’s Services business will create a company with approximately half of total revenues from long-term contracted sources, a stable funding source for our ongoing growth initiatives.

On the emissions front, the development of Ultera for the propane-powered fork truck market is an exciting opportunity to extend the technology into new platforms and verticals. Note that approximately 70,000 propane powered fork lift are sold annually in the United States alone.

It goes without saying that continued positive developments at ULTRATEK could be a massive game changer for Tecogen. We’ll find out the Phase II results early next year.

We see tremendous potential for Tecogen as its management believes it will be profitable going forward, while its growth opportunities come to fruition. Buy recommendation.