News » Tecogen Signs One of the Largest Contracts in Its History

Tecogen Signs One of the Largest Contracts in Its History

Tecogen Inc (TGEN – $3.37) has received an order for no less than 10 InVerde e+ Combined Heat and Power (CHP) units, one of the largest contracts in the Company’s history. The CHPs will be installed in a brand new residential building in Brooklyn, NY. Although no details were provided, the order is estimated to be worth well over $5 million.

Combined, the 10 systems have a peak generation capacity of over 1MW. The buyer opted to install 10 InVerde e+ units, instead of one large unit from a third party, simply because Tecogen’s equipment outclasses the competition.

The InVerde e+ also automatically starts up within 10 seconds in the event of a full blackout of the grid, making the CHP compliant with the new strict Type 110 standard for emergency and standby power systems.

In addition, these units will be equipped with cloud-based real-time performance monitoring via Tecogen’s CHPInsight software. That way, their performance can be monitored on an iPad or computer from anywhere in the world.

Moreover, the CHPs will be equipped with an Ultera system so that harmful emissions of NOx and CO are lowered to near-zero levels. The 10-unit system is expected to eliminate approximately 5,500 tons of carbon dioxide per year when compared to traditional energy sources. That means that this installation will generate annual carbon savings on par with removing over 1,000 cars from the road or planting nearly 130,000 trees.

Finally, because Tecogen has a market-leading fleet of installed CHPs in New York City, the Company is able to provide the highest level of customer service to both new and existing customers. After all, proper servicing ensures that buyers of our equipment can enjoy the levels of savings and reliability that they expect and demand. 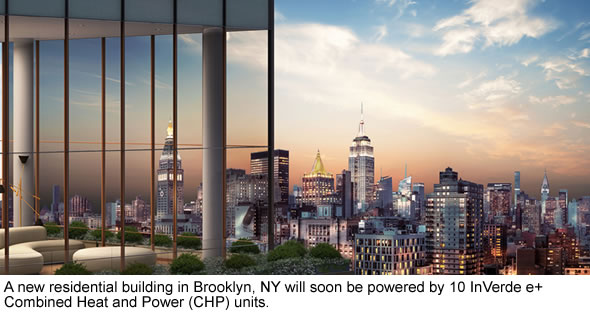 A History of Large Contract Wins

Although these large multi-unit orders are an exception, Tecogen has won several of them over the past few years.

This impressive order again highlights the scalability of Tecogen’s exclusive microgrid technology and the growing awareness of the Company’s rock-solid reliability, substantial cost savings, and small environmental footprint of its products. Recommendation BUY.