Tecogen Inc. (TGEN – $2.32), the vertically integrated clean technology Company that offers equipment design, manufacturing, installation, financing and long-term maintenance service, reported third quarter financial results. These were very important numbers for Tecogen in that it was the first full quarter in which American DG’s (ADGE) financials were integrated. Remember that American DG was acquired by Tecogen in May, 2017.

Total service related revenues for the third quarter of 2017 grew 20.0% over the prior year period, driven primarily by installation activity, while product revenue declined 14.9% compared to the third quarter of 2016. Chiller and heat pump sales more than doubled, partly offsetting a 30.2% decline from what were record cogeneration sales in the year-ago period. This is a temporary issue however, as many sales were shifted to the fourth quarter.

In addition, the acquisition of American DG Energy added a new energy production revenue stream, worth $1,556,115 in the third quarter. The ADGE revenue stream adds an important second source of annuity-like revenue thanks to its long-term contracts.

Also noteworthy is that the Company’s total revenue for the trailing 4-quarter period is at $30 million, another record (see chart below). The energy revenue is represented by the gray bars circled in red. Because energy revenue only represents earnings of about 4 months and this chart represents annual revenues as a trailing 4-quarters metric, this revenue appears insignificant for now. This is the introduction of ADGE’s revenue contribution, which will grow with time.

Overall gross margin in the third quarter of 2017 decreased to 38.3% compared to 41.9% in 2016. A shift in sales mix to lower margin items was partly offset by ADGE’s margin contribution of about 53%. Despite the drop, gross margins remain well within management’s targeted 35-40% range.

Tecogen delivered net income for the quarter of $27,211 compared to $207,868 in the third quarter of 2016. The quarter’s results included non-recurring expenses totaling $37,445 related to the Company’s merger with American DG Energy.

Backlog of products and installations was $14.5 million as of third quarter end, and stood at $16.8 million as of November 8, 2017. The solid backlog was driven by strong traction in the InVerde and Tecochill product lines and installation services. Especially Tecochill sales are doing very well. In the third quarter the Company sold five chillers and even in the past week it sold two more units.

Note that the backlog does not include service contract revenues, nor does it include ADGE’s estimated undiscounted future energy production revenues, which exceed $50 million, stretching over the next 15 years.

Co-CEO John Hatsopoulos said, “The third quarter showed the strategic importance of Tecogen’s acquisition of American DG Energy. It adds another stable stream of revenue to help cushion the ups and downs of our product revenue. We’ve now been profitable during four out of the past five quarters, with the second quarter of 2017, in which we completed the ADGE transaction, being the exception.”

Product sales declined 14.9% for the quarter as compared to the third quarter of 2016, which was a record quarter at the time. The drop is especially caused by a decline in InVerde e+ sales. However, this is mostly the result of timing of shipments, where a number of customers were not ready to accept delivery of the equipment until after the quarter ended. In contrast, chiller sales increased 176.3% year over year. Increasing interest from both the indoor agriculture market and the growing recognition of the value proposition of “mechanical CHP” are the key drivers.

Services revenues grew 20.0% year-on-year, benefiting from increasing penetration in service contracts and favorable operating metrics for the installed fleet as well as an active period for installations work. Continued penetration of the Company’s ‘turnkey lite’ offering, which includes custom value-added engineering design work as well as custom factory engineered accessories and load modules, has been a good source of services revenue growth and is expected to continue to develop as an important revenue stream.

Services gross margin declined to 34.0% in the period compared to the 43.5% in the prior year. Strong growth in lower margin turnkey installations accounted for the lion’s share of the drop in margin.

The Company’s net loss declined from $1.10 million in the first nine months of 2016 to $406 thousand in this year’s comparable period.

On a combined basis, operating expenses increased to $3,172,492 for the third quarter 2017 from $2,525,325 in the same quarter of 2016. An increase in selling expenses, which rose 37.0% to $503,415, merger related expenses of $37,445, and the consolidation of ADGE’s core overhead, accounted for most of the increase. The increase in selling expenses was due to an uptick in marketing related activity and higher sales commissions.

Depreciation and amortization jumped to $160,061 for the third quarter of 2017 from $66,484 for the same period in the prior year. The increase is related to the depreciation of the equipment that American DG Energy owns to deliver energy to its customers and the amortization of the corresponding contracts.

Note that due to the American DG acquisition it is hard to compare the current balance sheet with the one a year ago.

Tecogen’s cash balance is currently approximately $2.8 million. Once the Ultratek dissolution is completed however (see below), Tecogen will receive an additional $1.6 million in cash, putting the Company in a comfortable position from a balance sheet standpoint.

Ultera Will Soon Show Its Value

The efforts of Tecogen to commercialize its extraordinary emissions technology for use beyond the Company’s core products, continues to progress.

A couple of weeks ago, Tecogen and Ultratek’s co-investors decided to dissolve the joint venture before the end of the year. All unspent funds of Ultratek will be distributed to its investors. As part of this disbursement, Tecogen will receive $1.6 million in cash, the IP that it licensed to Ultratek when it was founded, and all the non-cash assets of Ultratek, including two awarded patents, four patent applications, and all data and knowhow gained during the lifespan of the JV.

To further finance the development of the revolutionary Ultera emissions technology for automotive applications, Tecogen will most likely set up a new company soon after the dissolution of Ultratek.

In the first quarter of 2017, Tecogen began a research program, funded by the Propane Education and Research Council (PERC), to demonstrate the effectiveness of the Ultera emissions systems on propane fueled fork trucks.

The program’s main goal is to develop a retrofit emissions system for fork trucks to reduce their emissions to levels more acceptable for air quality in indoor work environments. Earlier in the year, baseline testing of the unmodified fork truck was completed utilizing a donated fork truck from a major manufacturer that has expressed strong interest in Ultera and has agreed to assist with Tecogen’s research effort. The test data effectively indicates that the fork truck is an excellent fit for the Ultera technology.

At this time, the Company has completed modification to the fork truck associated with the Ultera retrofit and is ready to begin testing of the system. Executives from the manufacturer and PERC are tentatively planning to visit Tecogen in December to view the prototype operation first hand. 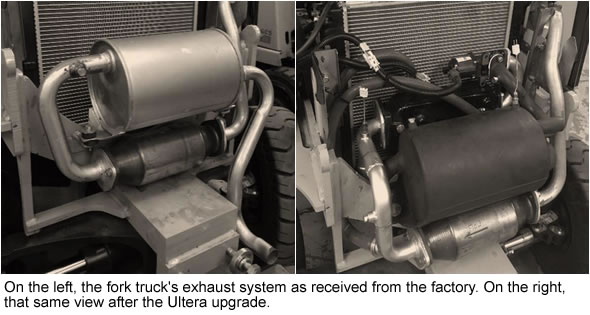 Finally, after successfully developing the Ultera technology for Tecogen’s own equipment, the Company’s Research & Development team began exploring other possible emissions control applications in an effort to expand the market for the ultra-clean emissions system. Retrofit kits were developed in 2014 for other stationary engines and in 2015 the Ultera Retrofit Kit was applied successfully to natural gas stand-by generators from other manufacturers, including Generac and Caterpillar.

Historically, standby generators have not been subjected to the same strict air quality emissions standards of traditional power generation. However, generators which run for more than 200 hours per year or run for non-emergency purposes (other than routine scheduled maintenance) in some territories, such as California, are subject to compliance with the same stringent regulations applied to a typical electric utility.

In 2015, Tecogen purchased a sample generator and retrofitted it with an Ultera. The results were extremely favorable. Meanwhile, an initial customer in California applied for permits to retrofit his existing onsite units. These permits were received, and Tecogen engineers have now retrofitted all generators with the Ultera system and commissioned for their normal, intended use.

The customer will complete third party “source testing” of the units, the final step in the permit process, in the upcoming month, at which time Tecogen will have independent confirmation of its ground-breaking emissions reduction capability applied to this very stringent application. This will be a very significant event for the Company and its emissions technology.

Tecogen successfully returned to profitability in its third quarter. It’s great to see that the contribution of ADGE revenues allowed the Company to maintain profitability despite a decline in product sales. Having this new steady flow of revenue makes it easier for Tecogen to remain profitable despite the ups and downs of product shipments. Additionally, the Company continues to improve ADGE’s fleet operations and profitability.

The Company has a number projects under way in the fourth quarter that should help to sustain its momentum going into 2018. For example, it will roll out an update of the Tecopower CHP unit, upgrade the chiller manufacturing capacity, and update some internal software systems to improve the operational efficiency.

In addition, Tecogen keeps a close eye on upcoming state approvals for new indoor growing facilities. Indoor agriculture continues to be a rapidly emerging new opportunity for growth, particularly for the Tecochill line of natural gas powered chillers. To-date, Tecogen has inked eight transactions in the space, all but one of which is to buyers who intend to grow cannabis.

An additional driver for growth is Tecogen’s expanding base of relationships with leading Energy Service Companies (ESCOs). Tecogen was contracted to perform feasibility and design studies for over one megawatt worth of new projects with a leading ESCO. These projects are on track and actual equipment orders are expected in early 2018. Tecogen is in negotiations with another leading ESCO for upwards of 900 kW of CHP projects. Lastly, the Company is working with a project financing group on several large projects initially projected to be over two megawatts in total.

Co-CEO of Tecogen, Benjamin Locke mentioned during the conference call following the publication of the financials, “ We have demonstrated tremendous financial growth over the past few quarters, culminating in our record revenues this quarter. We are planning on continued success going into 2018, including making renovations to our building to facilitate a larger production area needed for increased product manufacturing.”

He continued, “We foresee predictable revenues and margins from the ADGE fleet. Next, we will continue to grow our revenues and margins through our core business of product sales and service. Our CHP systems are becoming increasingly acknowledged and specified as the best technical choice for CHP in our size range. Our chillers are becoming the standard design for indoor growing facilities, and our relationships with key partners continue to grow and expand. Consequently, we expect robust product orders in the coming quarters as we continue to make good progress with our direct sales efforts, interactions with ESCOs and continuing need for our chiller systems.”

The decline of Tecogen’s stock price following the release of the financials, creates a tremendous buying opportunity. Recommendation BUY.