Although Tecogen’s progress in 2015 from a financial standpoint was strong, the Company also paved the way for accelerated growth in coming quarters. For example, the recent partnership with a gas company to market and sell Tecogen’s machinery in its area of operation. The intention is to close many similar deals with other gas company partners. Also, the latest Combined Heat & Power (CHP) unit, the InVerde e+, which distances the Company even further from the competition, should contribute tosales growth. The fundamental economics of CHP, such as high electric rates, low gas rates, and grid resiliency concerns continue to be in the Company’s favor. 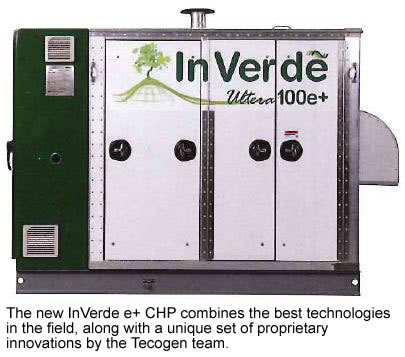 Furthermore, we expect significant news in 2016 from the stationary emissions aftertreatment market. Tecogen originally developed and patented the Ultera low-emission control technology, which reduces the emissions of pollutants contributing to smog (NOx, CO, and hydrocarbons) to near zero levels, for its own CHP products. However, a couple of years ago, it decided to make the technology available for retrofit on non-Tecogen equipment as well.

Finally, we’re very excited about Ultratek, a joint venture with a group of strategic investors, to test, verify and develop the Company’s Ultera technology for vehicular applications. Adapting the Ultera low emissions system to the automotive industry represents an exciting and potentially game changing market for Tecogen. The prospect of gasoline engine vehicles, operating with standard engine technology, but realizing fuel cell like emissions is tremendously compelling from a policy and market standpoint. Good progress is being made in the area, and phase I testing by AVL North America is set to begin next week.

Machine sales in 2015 grew 16.6% to $10,055,237 versus $8,625,034 in 2014. This solid performance was mainly driven by strong sales of cogeneration equipment, posting over 45% growth in sales in this category over the prior year. This again demonstrates the Company’s strong market traction of its InVerde CHPs. Similar strong sales are expected from the newly launched InVerde e+.

Besides selling machines, which in many cases are one-off deals, Tecogen generates plenty of revenues through service contracts, which is a reliable and growing part of the Company’s total sales. Service revenues in 2015 were $11,387,420, up 6.2% compared with $10,717,630 in 2014.

Because service margins are higher, Tecogen is intensifying its efforts in that area. It has established a sales office in Florida to serve the southeastern United States and the Caribbean, bringing the total number of sales offices in the United States to four.

Noteworthy is that despite the 11% sales increase, operating expenses have hardly risen in 2015. Also in 2016 it remains one of management’s key goals to tighten and decrease spending.

Tecogen finished 2015 with close to $5.5 million in cash. In June 2015, it secured a two year $2 million line of credit from its founder and Co-Chief Executive Officer, John Hatsopoulos. That funding was following in August of this year when it sold in a single transaction 1.25 million shares of common stock at $4.00 for a total raise of $5,000,000. Thanks to these funds, Tecogen is well positioned to fund ongoing operating expenses and future growth initiatives. Similarly, in conjunction with the launch of the Ultratek joint venture, Tecogen raised a further $3 million via private placement, solidifying the balance sheet.

Tecogen also announced that it plans to acquire the minority interest in heat pump subsidiary Ilios Dynamics in exchange for Tecogen common stock. At this moment, the Company owns 65% of Ilios. Its initial goal is to acquire at least 90% via the exchange offer, after which a squeeze-out of the remaining Ilios shareholders can be initiated.

The timing for this initiative couldn’t have been better, as Ilios’ market continues to expand geographically with sales to the UK, Atlanta, Hawaii, New York City, and Puerto Rico. In addition, the water heaters are gaining traction in new market segments, with initial sales to the hospitality and medical markets. In fact, the number of Ilios units sold more than doubled in 2015 compared with 2014.

Tecogen’s proprietary cogeneration technology, which improves efficiency, emissions, and grid resiliency, is truly disruptive to the traditional methods of heating, cooling, and powering buildings and infrastructure.

In addition, there’s an increasing global emphasis on environmentally clean technologies, and emissions regulations are set to become stricter worldwide. Because Tecogen’s Ultera low-emission control technology is the only system in the world which reduce harmful emissions to near-zero levels, the Company is bound to benefit significantly.

These trends are already visible in the Company’s financials. We’re convinced that with the launch of the new InVerde e+ and the expansion of the sales efforts these results will continue to improve.

Finally, it’s obvious that any breakthrough with the Ultera in the automotive market will result in a paradigm shift for both the auto industry and Tecogen. Buy recommendation.