With the ongoing development of efficient and reliable on-site electrical generating systems, the capability to secure immediate backup power, independent from the electric grid, is gaining traction in the market. The option to install distributed power has always appealed to critical industries where even a short interruption of electric power could create extreme disruption to operations.

Consider for example the importance for a data center to remain online and functioning at all times. The potential disruption and costs associated with an unplanned shutdown have made access to backup generators essential for certain businesses, despite the added expense associated with the install. But now the efficiency of the latest technology is improving, and a variety of financial incentives have been introduced that further improve the economics of these systems enough to become attractive to a wider range of end users.

Tecogen Inc. (NASDAQ: TGEN – $3.50 & Fra: 2T1 – €2.79) has taken the distributed energy generation platform to the next level, when the Company recently introduced its flagship InVerde e+ product line which incorporates inverter technology to expand the operational functioning of the units.

By combining an inverter with the InVerde e+ system, the technology is now compatible with protocols for the emerging Smart Grid. This enables end users to participate in Demand Response (DR) programs that have been developed to allow local electric utilities to better manage power supply during periods of peak electric demand on the grid.

The Smart Grid employs sensors to monitor electrical power usage and allows distributed power generation to supplement the electric supply to the grid during peak demand intervals. In effect, rather than disconnecting from the grid and activating backup power needs as would occur during a grid-down event, the latest inverter technology included with InVerde e+ units will enable generator operations to proactively supply power to the grid, while still maintaining the power to critical systems for end users.

The ANSI/UL 1741 SA level of certification involved in this system is the new safety standard for distributed generation using inverters, adopted by California and other states. By ‘interconnecting’ with the local electrical utility, it creates the option during a power imbalance for certified generator systems to go online and contribute power to help stabilize the grid. To meet the requirements for this Smart Grid, the onsite generating units must be equipped with certified ‘smart inverter’ capability.

Certified participants of the Smart Grid are able to capture attractive financial incentives that serve to enhance the economic efficiency of these new systems, making them even more attractive for end users.

Intertek, a leading Quality Assurance provider to the energy industry, has granted certification under this new system to Tecogen’s InVerde e+ line. Tecogen has established a working relationship with Intertek spanning more than 30 years. 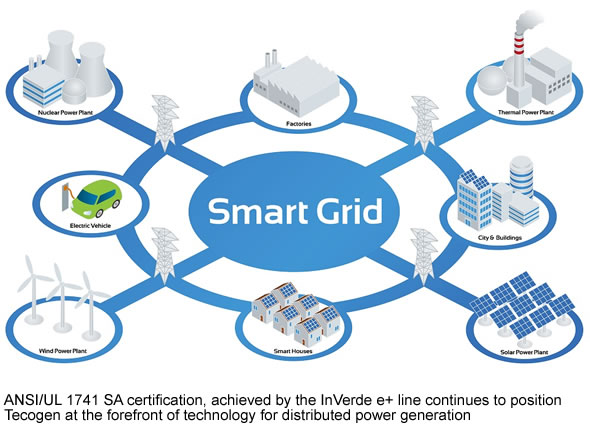 The Smart Grid system relies on a blockchain-based distributed ledger to store information acquired from metering devices in a secure setting. This information is then used for tracking and performance verification. Self-enforcing ‘smart contracts’ have been set up with financial performance incentives to pay off when the InVerde e+ units are called online to supply power.

In addition, the Tecogen line features CERTS microgrid technology which combines battery storage capacity with the inverter system. The added cost of a battery storage backup had delivered marginal economic performance in the past, before the option of smart contracts. With the added financial incentives through the new Smart Grid the overall economics for the entire system are vastly improved, due to the extra income afforded through expected payouts that become available to certified end users.

This is a win-win arrangement for both parties. Electrical Utilities are better positioned to manage supply and demand variables under the smart grid, increasing the reliability of the overall system. And end users that have invested in Tecogen InVerde e+ generators will still have the backup power reliability in the event of a grid down scenario, but are now able to cash in with added financial incentives that serve to increase return on their initial investment.

While California is currently the only state that mandates ANSI/UL 1741 SA certification, other states often follow the lead. As more distributed power generation systems come online, it is likely that this standard of safety will be adopted in other areas.

ANSI/UL 1741 SA certification, awarded by an independent Quality Assurance provider, is more than a matter of prestige. This level of standard achieved by the InVerde e+ line continues to position Tecogen at the forefront of technology for distributed power generation, and represents a proprietary advantage in the sector as the economic performance of these units continues to improve.

The improved economics also make these generating systems viable to a larger number of end users, thereby expanding the potential market size for the technology, and building further growth potential. And as more of these units are installed and operating, the combined energy generation supplied to the grid during peak power demand intervals may contribute to make the entire electric grid more resilient for all users. Recommendation: BUY.