Tecogen Inc. (TGEN – $4.23), which designs, manufactures and installs industrial and commercial Combined Heat and Power (CHP) systems, sold three InVerde 100 kW units to a multi-family residential building in the Coney Island section of Brooklyn, NY. The order is worth over half a million dollars.

The units will be equipped with Tecogen’s unique and patented Ultera system, which reduces emissions of harmful pollutants such as NOx, CO and HCs to near-zero levels, as well as the exclusively licensed CERTS microgrid control software.

The state-of-the-art CERTS microgrid software ensures that the three units can operate in tandem, seamlessly balancing the facility’s demand. Similarly, in case of blackout, the sophisticated cogeneration system can disconnect from the grid completely and operate in island-mode – ensuring building occupants are never left in the dark and offering essential emergency power.

The Consortium for Electric Reliability Technology Solutions (CERTS), was formed in 1999 to research, develop and commercialize new methods, tools and technologies to protect and enhance the reliability of the U.S. electric power system. The organization is a cooperation between universities, national labs, and the utility industry.

CERTS has been working with Tecogen since 2005 to modify the Company’s equipment to incorporate CERTS software that enables seamless transfer to and from the electric grid without elaborate controls and building upgrades. Thanks to the software the Tecogen modules are able to operate as a conventional CHP application interconnected to the electric grid, but with the capacity to disconnect from the grid and continue operating as an “island” whenever a grid disruption occurs. This type of installation is also called a microgrid.

Microgrids can serve areas as small as a few houses, all the way up to large military installations. In addition, they can operate either independently or connected to a larger utility grid.

It’s important to note that a backup power system — like a diesel generator — is not the same as a microgrid. Backup generators supply power to local loads in the event of an outage, but there is usually a delay or blip when you lose power and disconnect from the utility grid before the backup kicks in. In addition, a backup system is never meant to run continuously, nor to put power into the grid. However, the reverse is true with a microgrid which can serve as a backup power supply.

A microgrid senses the quality of the power flowing through the grid. In the event of an outage, it can disconnect from the grid at a moment’s notice. It can also leverage solar, wind, or stored energy to supplement a dip in the current power supply. If things are running smoothly with the regional grid, a microgrid generating electricity from renewable sources can export that clean energy to the grid for everyone’s use.

A real-life example was witnessed in 2012 when superstorm Sandy hit New York City and caused wide spread power outages for several days. The Brevoort however, a 1950’s era co-op tower in Greenwich Village, maintained power, water and heat thanks to Tecogen’s microgrid-equipped Combined Heat and Power system. The four Tecogen InVerde units providing power to the building were designed to provide not only efficient, economical and clean power day in and day out, but also to continue functioning even in the case of a grid failure and blackout. And that’s exactly what they did when disaster struck. 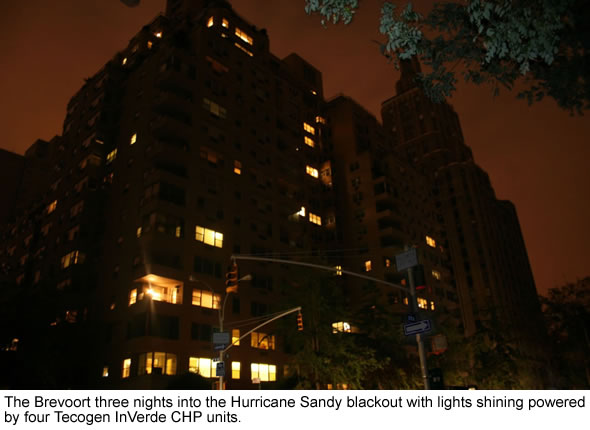 In New York City, Tecogen’s cogeneration systems can operate in parallel with Con Edison utilities during
periods of regularly available power. During a power grid failure Tecogen’s proprietary inverter and microgrid technology will continue to provide power to the residences.

This significant contract win is obviously again excellent news for Tecogen. While the Company’s strong working relationship with a growing number of contractors and energy service companies (ESCOs) helps to secure a constant flow of new orders, its sales team is also in direct negotiations with numerous parties.

All of this helps to increase the Company’s sales backlog of equipment and installations. As of August 5, 2016 the backlog was $15.9 million, well above the Tecogen’s ongoing target of achieving product backlog greater than $10 million.

Speaking about the backlog, Benjamin Locke, Tecogen Co-Chief Executive Officer noted, “Our strong backlog sets us up to deliver what we expect to be compelling results over the next several quarters.”

Tecogen’s stock price was under pressure this past week. We suspect one of the possible sources of stock price pressure to be the removal of selling restrictions on certain previously locked up shares and options. It would have been better to sell the shares more gradually; however, we see nothing fundamentally behind the decline. As a possible silver lining, it gives alert investors an opportunity to pick up some dirt cheap shares while improving longer term stock price liquidity. Buy Recommendation.