News » Tecogen Advancing on Many Fronts

Tecogen Advancing on Many Fronts

Tecogen (TGEN – $5.05) experienced a decline in its second quarter revenues, ended June 30, 2016, due to temporary issues. Compared with the first quarter of 2016, revenues did rise 12%, driven by both product and service revenue growth of 6.3% and 16.6% respectively. Moreover, the Company made considerable progress on many other fronts.

Gross margin in the second quarter 2016 increased to 37.0% compared to 33.5% in 2015. Margins benefited from a revenue mix shift and strong improvement in services gross margin, partially offset by a decline in product gross margin.

Also, the Company had a steady flow of new orders coming in, partially thanks to strong relationships that it built with repeat customers, such as National Mechanical, a New Jersey property developer, and a multinational energy service company (ESCO). As a result, the Company’s sales backlog of equipment and installations as of August 5, 2016 was $15.9 million. Well above the ongoing target of achieving product backlog greater than $10 million.

In addition, the backlog does not include service contract revenues, which in general represent more than one third of the Company’s revenues. The $15.9 million figure also doesn’t include the backlog of TTcogen, the Company’s joint venture with Czech CHP manufacturer TEDOM.

Although the TTcogen JV was only announced a few months ago, it is already seeing strong interest in its expanded product portfolio. We learned during the conference call, following the release of the second quarter results, that more orders are on the way.

It’s interesting to know that TTcogen offers a full CHP product portfolio ranging in size from 35 kW up to 4 MW. These units meet 60% of the total CHP market potential versus just 20% of the CHP market that is served by Tecogen. Assuming that the U.S. target of deploying 40 gigawatts of CHP equipment is met, TTcogen’s addressable market is 20 to 25 GW over the next 4 years.

Backlog of products and installations was $14.1 million as of second quarter end and currently stands at $15.9 million, over 70% growth when compared to the $9.3 million in backlog at second quarter-end 2015. The impressive advance was mainly driven by strong traction in the InVerde product line and Installation services.

Speaking about the backlog, Benjamin Locke, Tecogen Co-Chief Executive Officer noted, “The sales team has been executing well and closing orders, this strong backlog sets us up to deliver what we expect to be compelling results over the next several quarters.”

Sales were adversely affected by a couple of temporary items. First, there was a temporary suspension of incentive programs in New Jersey for CHP and New York for chillers. These incentives have now restarted, and the first positive effects are already noticeable for Tecogen. Also, progress on several other installations was slowed due to permitting and other site-readiness issues that were outside of Tecogen’s control. Because the Company recognizes revenue only when an order is completely finished, no sales were included from pending installations.

Product sales revenues were lower in the period, with a 28.0% reduction over the prior year comparable quarter. This decline in total Product revenue was impacted by lower cogeneration sales that were partially offset by a 39.0% improvement in chiller and heat pump sales versus second quarter 2015. Chiller orders rebounded in the quarter helped by growing sales momentum in the indoor agriculture segment as well as by a repeat order from Stanley Black & Decker for their manufacturing facility in Mexico. 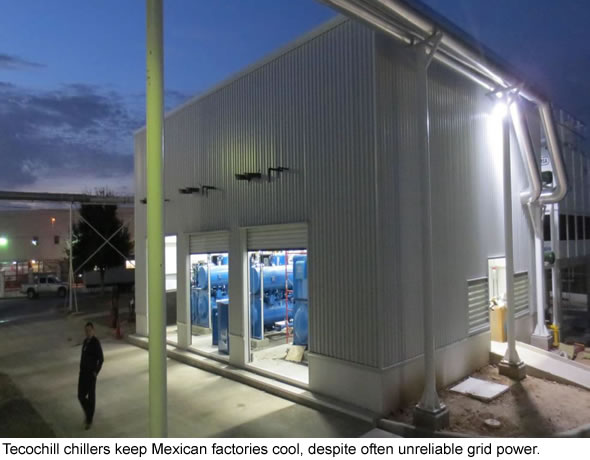 Revenues were helped on the other hand by 7.9% growth in services related revenues over the prior year period. Total services revenue growth continues to steadily benefit from increasing penetration in service contracts and favorable operating metrics for the installed fleet.

The reliable, annuity like, services revenue stream is expected to continue to rise thanks to the expanding installed base and the fleet’s growing number of operating hours. Service revenues typically are around 1/3 of the Company’s revenues.

Cost of sales improved dramatically in the second quarter of 2016 to $3,584,414, down 15.5% over the prior year period. This improvement was mainly due to the first InVerde e+ CHPs that were installed and also because of lower revenues.

A result of the sharply reduced cost of sales was that gross profit for the second quarter of 2016 was $2,102,894 a near flat result when compared to $2,140,890 achieved in the same period in 2015. Despite the decline in revenues, this small decrease in gross profit is a testament to the effectiveness of management’s ongoing expense control initiatives.

In the long term, the newer, and more robust InVerde e+ cogeneration product will deliver excellent margins for the company. Great progress with current and new material suppliers has been made to improve margins even further.

Tecogen finished the second quarter of 2016 with a little over $4 million in cash, compared with $1.6 million one year ago. In addition, just last week, the Company received $2.7 million in new financing via the exercise of warrants.

Results from initial Phase I testing of Ultera on a light duty vehicle indicate that the patented emissions control system is highly effective at delivering further emissions reduction in criteria pollutants (those contributing to smog and negatively impacting human health). Also very important to know is that consistent with the experience of the Ultera in stationary industrial applications, the system did not increase the fuel usage of the test vehicle.

Phase II testing and development, slated to begin later this month, will utilize a more refined design of the Ultera prototype system. It will have a better size to match the vehicle, a faster response time to various conditions, and an improved formulation in terms of chemistry.

The tests will be conducted on two gasoline powered vehicle models, one certified for both U.S. and European use, while the other has certification for European markets only. These models were selected as representing very advanced, high-mileage vehicles for which the Ultratek team’s industry assessment indicates are vehicle types of high importance but with inherent emissions challenges.

Six weeks of testing are planned. The testing will be well supported by Ultratek’s $6.2 million in cash on hand following the recently announced second round funding.

For the time being, Tecogen’s quarterly results are still a bit lumpy, which is quite normal for a company that’s moving towards becoming profitable, significant progress is being made to reach that goal.

The Company continues to focus on innovative solutions and technologies, such as the InVerde e+ and the Ultera ultra low emission technology. Additional product improvements will shortly be introduced, which will further differentiate Tecogen’s equipment from competitors’.

The sales team had some notable wins in the quarter and is making material progress on building lasting relationships with partners that can produce long term repeat business for Tecogen. In addition, costs are under control as demonstrated by increased gross margins.

Moreover, the incentive programs in New Jersey and New York have restarted, which removes the uncertainty for potential customers.

Tecogen’s backlog currently stands at an impressive $15.9 million. The installation of all these units will result in strong revenue growth in coming quarters.

TTcogen’s wide product portfolio quadruples Tecogen’s potential addressable market for cogeneration and allows the sales team to offer efficient equipment powered by renewable biofuel, an important new market with significant growth potential. The first sale for TTcogen has been booked and more are in the pipeline.

The following months will be very exciting as we watch all these events unfold. We will also closely monitor the developments at Ultratek, which if Phase II tests also turn out to be positive, may become the gigantic icing on the Tecogen cake. Buy recommendation.