Tecogen’s patented Ultera emissions technology has already been rigorously tested for stationary natural gas powered engines. Independent tests show that the system reduces the emission of pollutants, such as CO and NOx, to near zero levels for these types of engines.

The goal of Ultratek now is to find out if this technology can be adapted to transportation applications in the automobile and truck categories.

Tecogen received a 50% equity interest in the new JV in exchange for a fully paid-up worldwide license to use Tecogen’s Ultera emissions control technology in the field of mobile vehicles burning fossil fuels. The other half of the joint venture equity interests were purchased for $3,000,000 by a small group of offshore investors. Note that Tecogen retains the rights to its Ultera emissions control technology for all other applications.

The timing to form the JV couldn’t have been better, as the problems with vehicular emissions have recently been widely exposed by the Volkswagen scandal.

Although the emissions scandal for vehicles has primarily been about diesel engines, for which the Ultera technology is not suited, the emissions performance of gasoline engines has also been brought into question. While there has been no suggestion of improper testing, compliance testing has been negatively described as not being representative of real world conditions. Moreover, future vehicle emissions regulations will become progressively more difficult to reach through 2025. As a result, the Ultera could be a much needed solution for the car industry.

First research, conducted by the Company’s Emissions Advisory Group suggests that gasoline engines are somewhat similar to natural gas engines and there is a good likelihood that Ultera is effective with vehicles as well. It’s clear that if successful, Ultratek will revolutionize the car industry.

In addition to the joint venture agreement financing, the strategic investors have collectively purchased 890,208 shares in Tecogen at a trailing 30 day average price of $3.37, bringing their total initial investment to $6 million. The investors also received warrants to purchase 900,000 shares of Tecogen’s common stock at a $4 strike price, providing Tecogen an additional $3.6 million in capital if exercised.. The warrants expire in six months. With this additional financing, the Promissory Note of $3,000,000 that is due at the end of 2016 appears secure thanks to the infusion of capital.

In 2008 there was a dramatic change in the air quality regulations in Southern California. At that time no technology could meet the new, stricter, emission standards.

The Ultera breakthrough technology was developed in 2009 and 2010 as part of a research effort funded by the California Energy Commission and Southern California Gas Company. The objective was to bring emissions from natural-gas engines and CHP systems into compliance with California’s standards, which were, and still are, the most stringent in the United States.

Other manufacturers apply a three way catalyst to simultaneously get rid of NOx compounds, CO and hydrocarbons with mostly unsatisfactory results. Tecogen instead, decided to look at the chemistry of emissions instead of the mechanical controls of the engine. They broke the catalyst process into two steps and tried running each step at a different temperature.

By controlling the temperature in the first stage, the system could achieve very low NOx. The second stage process needed to be configured to oxidize the remaining pollutants, such as carbon monoxide and various hydrocarbons. This was achieved by injecting a little air between the first and second stages and altering the process conditions. 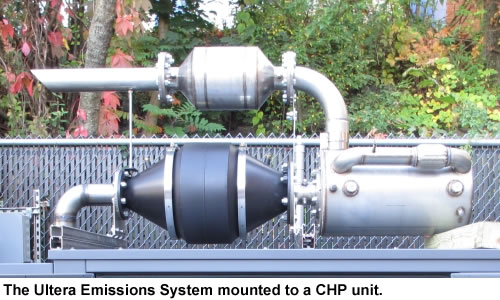 The first commercial CHP units, equipped with the Ultera low-emissions technology, were shipped in 2011 to a California utility. Tecogen conducted three validation programs for its revolutionary technology:

In 2012, a 75 kW CHP unit equipped with the Ultera system became the first unit to obtain a conditional air permit in Southern California since the strict regulations went into place in 2009. A state-certified source test, administered in January 2013, verified that the emissions levels of the system were well below the new permitting requirements, and the final permit version was approved in August 2013.

After a successful field test of more than a year, the Ultera technology was commercially introduced as an option for all of Tecogen’s products under the trade name Ultra, which was recently changed to Ultera.

This technology was patented in the US in October 2013 with many foreign patents granted or applications pending. Because of the Company’s strong belief in the value of its emissions technology, patent infringement insurance has been secured by Lloyds of London to defend unlicensed use of Tecogen’s intellectual property.

The Ultera low-emissions technology repositions the Company’s engine-driven products in the marketplace, making them comparable environmentally with emerging technologies such as fuel cells, but at a much lower cost and greater efficiency.

Tecogen originally developed and patented the Ultera-low emission control technology for its own CHP products and has since decided to make the technology available for retrofit on non-Tecogen applications.

The Ultera retrofit kits deliver simple, cost-effective and robust solutions for meeting even the most stringent emissions standards. The patented system provides peace of mind to its customers by lowering NOx and CO (criteria pollutants) to near-zero levels without the need for complex additional controls or frequent maintenance.

Early October 2015, following the outbreak of the Volkswagen emissions scandal, Tecogen formed an advisory group to explore market applications of its patented Ultera technology for the gasoline vehicle market.

Robert Panora, Tecogen’s President, Chief Operating Officer, and one of the inventors of the Ultera technology, leads the initiative. Other members include Angelina Galiteva, Chairperson of Tecogen’s Board of Directors, Chairperson of the World Council for Renewable Energy (WCRE), and a member of the Board of Governors of the California Independent System Operator (CAISO).

A final member of the group is Keith Davidson, who has over 25 years of experience in the energy industry. He has focused on environmental technology development, feasibility studies, product commercialization, application engineering, economic analysis and market development. Mr. Davidson is currently active in the California Clean DG Coalition and the US Combined Heat and Power Association.

The advisory group so far reached out to various organizations and consultants to gain a better understanding of the current regulatory framework that applies to vehicles and the future course of these regulations.

The group determined that vehicle emissions regulations are fairly generous compared with the strict regulations that the Company faces in the stationary market today. Moreover, many vehicles may perform well when tested, but actually underperform in real-life driving scenarios. Discussions with experts in the industry have also highlighted that as of 2017, tests will become increasingly more rigorous. That’s excellent news for Ultera and Ultratek.

In addition, the advisory group also looked at the chemistry. Will the Ultera process apply to gasoline engines as it does to natural gas engines? Although more research has to be conducted, the answer from the consultants is clear: “We have a high degree of confidence that the Ultera technology will work for gasoline engines”.

Another item the group is looking into is where is the most efficient area on the vehicle to install the Ultera.

In three to six months the advisory group aims to have sufficient answers to start prototype development. The $3 million funding of Ultratek is more than sufficient to cover costs associated with initial tests.

The patented ultra-clean emissions control technology has been rigorously tested by independent labs and has shown to consistently reduce the emission of criteria pollutants contributing to smog (CO and NOx) to near zero levels for natural gas engines.

Adapting the Ultera technology to gasoline fueled engines, represents an exciting and game-changing new market for Tecogen. The prospect of vehicle and stationary engines, with standard engine technology, but realizing fuel-cell-like emissions is tremendously compelling from a policy and market standpoint.

In addition, the Ultera is inexpensive and is very robust, as it has been successfully applied over the past years in various engines. Moreover, the Ultera system is non-intrusive, meaning that nothing has to be altered to the engine to which it’s added.

The Volkswagen emissions scandal obviously provides an excellent opportunity for Tecogen to prove that its technology is the best way to meet these stringent standards. Initial research indicates that the Ultera technology may work for gasoline fueled engines.

It’s clear that any breakthrough in the billion dollar automotive industry immediately puts Tecogen in another category.