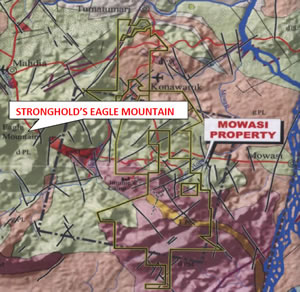 Regional Geology map of the Mowasi and Eagle Mountain areas.

Stronghold Metals (Z – $0.30) entered into a definitive option agreement with Mowasi Gold Corp under which Stronghold can acquire a 95% interest in 31 concessions, covering an area of approximately 8,300 hectares, adjacent to the Company’s Eagle Mountain gold project in Guyana.

By April 2013, Stronghold can earn a 49% interest in the concessions by expending at least $1 million USD on explorations on the property, and by paying $100,000 USD and issuing 250,000 common shares of Stronghold to Mowasi.

After acquiring the 49% interest, Stronghold has 90 days to acquire an additional 46% interest in the concessions (total 95%) by issuing two million common shares of Stronghold and paying the sum of $1 million USD to Mowasi.

Mowasi Gold Corp. contracted Watts, Griffs and McOuat (“WGM”) to carry out preliminary work on the Mowasi property, which included limited geological mapping, a structural analysis utilizing the Shuttle Radar Topography Mission data to provide a shaded topographic relief map and some limited geochemical sampling. Based on this work WGM completed a NI 43-101 compliant technical report for the area in 2010.

Stronghold is currently planning the immediate exploration activities on the Mowasi concessions. Work on the ground is expected to start in early 2012. The first phase program will include among others, detailed drainage mapping, stream sediment and soil sampling program, regional and detailed local geological mapping, potential trenching etc. Once completed, drill targeting will become feasible within 2012.

Although Mowasi provides a significant upside potential to Stronghold’s gold operations in Guyana, the Eagle Mountain project will remain the primary focus of Stronghold as more than 80% of the Company’s budget will be spent there.

Another technical team, than the one active at Eagle Mountain, will carry out the exploration work, but will also be supervised by Stronghold’s Exploration and Country Manager, Mrs. Anne Casselman.

The Mowasi concessions are at an early exploration stage, but the acquisition has a strategic character, given the recent successes from the ongoing drill program at Eagle Mountain.

Since alluvial mining activities in the area show that the concessions are highly prospective for gold, Mowasi represents a good opportunity to expand the current resource estimate for Eagle Mountain.