It has been an exciting start for Sterling Metals Corp. (CA:SAG – $0.27 & US:SAGGF – $0.21 & GER:LACB – €0.18) following the commencement of exploration at the Sail Pond property in Newfoundland. The Company was fortunate to acquire their flagship asset under favorable terms. This was partly due to that fact that there was no previous history of exploration drilling within the project boundary. While the Company correctly completed preliminary exploration and sampling work, the maiden drill program launched at Sail Pond last year was still considered a high-risk exploration program.

In order to improve the odds for the initial phase of drilling in 2021, Sterling contracted with Goldspot Discoveries Corp. Goldspot is a consulting firm specialized to interpret geological data and develop an exploration model for complex systems. The arrangement utilized advanced Artificial Intelligence technology that is helpful to define drilling targets. 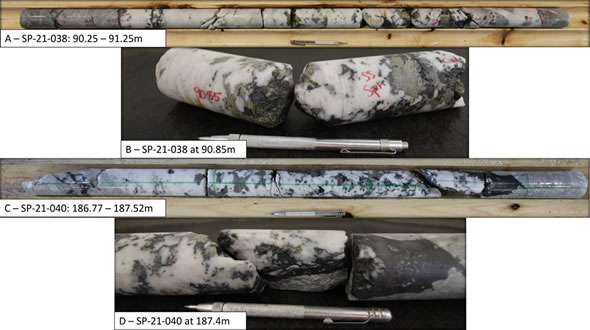 This week, the final assay results were reported for the remaining samples. Once again, some high grades and significant mineralized widths of drill core were presented. Consequently, it’s safe to say that Sail Pond is emerging as an important discovery with the potential to host a district-scale mineralized system. The Company is learning much more about the distribution of mineralization along the extensive strike length of the system. This will enable even more efficient targeting of future exploration as the next round of work kicks off later in the year.

The first round of assay results was a validation of the decision to acquire the property. It also provided confirmation of the exploration strategy. The right combination of precious and base metals were encountered, often with very high grades. Several wide continuous mineralized zones were presented in the initial batch of drill holes.

Another round of sample assay results for more of the drill holes was reported shortly thereafter. Exploration was concentrated within the South Zone target area. Once again, attractive grades of polymetallic mineralization were reported. Much higher grade enrichment was often concentrated within more narrow subintervals. The best results included a section of 0.34m in drill hole SP21-023, with an average silver-equivalent (AgEQ) grade of 4413g/t. This was carried within a larger section spanning nearly seven meters bearing 239.27 AgEQ.

The mineralization pinches and swells along the contact zones between a unit of dolostone rock and an underlying argillite sequence. Multiple layers of mineralized zones were reported in some drill holes. Continuous alteration was encountered along the lateral extent of the target area. Base metals minerals were concentrated within massive and semi-massive bands of sulphidation across broader sections of the deposit. Robust silver grades were localized within narrow sections of quartz veining. The South zone itself is just a small portion of the overall interpreted strike length of the system, which is estimated at more than 12km. Sterling achieved an exceptional start to its exploration program.

It appears that Sterling is advancing a substantial discovery breakthrough at Sail Pond. Results reported this week included Hole SP-21-1038, highlighted by a one-meter interval with an average of more than 850g/t AgEQ. This was part of a larger mineralized section of nearly 20 meters. Hole SP-21-039 generated a similar high grade result of 963g/t AgEQ over a one-meter interval, as part of a larger mineralized section spanning more than 16 meters in length.

So far the drilling work has outlined a deposit roughly 400m along strike and up to 80m in width, down to a depth of 200m below surface. Higher grade sections have been observed within narrow quartz veining. These veins often occur within wider sections of lower grade breccias and lenses of alteration. The target area, now referred to as the Heimdall Zone, appears to be part of a much larger silver system.

Similar geologic settings have also been interpreted elsewhere along the structure. The potential for a more significant discovery from this early stage is very attractive. Sterling now believes that several distinct deposits may be clustered along this linear trend. The appropriate analogy would be for a string of pearls, with the Heimdall Zone representing just the first high-grade pearl of a larger system.

The results prompted Sterling to engage SRK Consulting Ltd. to complete a detailed structural study. The scope of this work included drill core analysis as well as information drawn from sampling and prospecting of mineralized outcrops at surface. This study provided additional interpretation regarding structural controls for the mineralization encountered at Sail Pond. Sterling is incorporating this work to update the exploration model for the property. The ongoing relationship with Goldspot, along with the evaluation of structural features by SRK Consulting, builds confidence for the exploration strategy.

The Sail Pond property is delivering on the potential envisioned through preliminary prospecting work. Sterling has come a long way over the last 12 months as a junior explorer advancing a grass roots prospect. Successful drilling work has established an emerging polymetallic discovery with attractive grades. Geological interpretation using modern technology has been validated. The Company has learned more about the system as work advanced and is now in better position to direct future exploration activity.

An appealing deposit is being outlined that remains open for further expansion. However the current exploration model suggests that the Heimdall Zone is one of many such deposits that may be outlined along the 12km strike of this system. After a pause to review all data and update the exploration model, Sterling expects to be back in the field within weeks to commence the next round of work activity. New targets are being interpreted in sections of the North and South Zones where no previous drill holes have yet been completed. This emerging grasp of the structural controls for the larger system will contribute towards a successful outcome as work continues.

Systematic exploration will build further on the established deposit area. The potential for expansion of the Heimdall Zone is attractive, but the expectation to uncover additional high-grade deposits as work begins at other targets further along the system is also a catalyst for speculative upside. Therefore Sterling is reviewing all data to update the exploration model. The Company plans to resume activity at the property with its 2022 exploration program commencing towards the end of the Spring. With a discovery confirmed, Sterling will now have the opportunity to expand on the magnitude of the deposit area to outline a significant silver district at the project. Smallcaps Recommendation: BUY.