The strong improvement was driven by both a higher number of systems in operation and by larger units that had been taken into production. This was also reflected in the higher energy production of all systems combined. In the first quarter of 2016 a total of 9,940,307 kWh of energy was generated, a 40% improvement over prior year results.

In fact, the availability and efficiency of its operational fleet has been one of the Company’s main focus points the past few quarters, as it also helps to drive up both margin and revenue.

A CHP unit’s availability, or up-time, can never reach 100%. Sometimes the equipment fails or it needs maintenance, or it might even be temporarily shut down because the electricity tariff from the grid is too low at certain times of the day, or year, to make sufficient margins. Overall fleet availability in the first quarter of 2016 was 88%, the best score ever achieved and a dramatic improvement over the 72% availability in the comparable period last year. This was achieved mainly thanks to several updates to the CHP units and improved system management due to in-house maintenance.

Efficiency, on the other hand, measures how much of a unit’s input fuel is converted to energy which can then be sold to the customer. In this case efficiency was 79% in the first quarter of 2016 compared to 80% in last year’s first quarter. Although a slight drop this is not a concern as it reflects the greater number of TEDOM units operational.

This is the true beauty of EuroSite Power. Its revenues are mostly predictable as the biggest contributing factor is the number of cogeneration units in operation. That number continues to steadily increase as the number of contracted customers and potential new customers grows both in the UK and mainland Europe. In addition, each unit that’s taken into operation comes with a 15-year contract, assuring EuroSite Power of a guaranteed, steady income. All of this makes the Company’s revenues grow almost on a quarter to quarter basis.

In addition, EuroSite Power’s margins are growing, which makes it turn profitable sooner. It’s just a matter of time before the Company reaches that magic number of operational installations to make it become cash flow and net income positive.

EuroSite Power aims to grow its number of CHP systems in operation organically. These efforts are aided by the project financing agreements which were executed with Societe Generale Equipment Finance and Macquarie Equipment Finance during the first quarter of 2016. These agreements eliminate capital constraints on projects. In other words, any project, no matter what size, which meets the Company’s return hurdles, may now be pursued.

Within its current pipeline, the Company has plenty of parties with which it’s actively negotiating. During the conference call, following the release of the first quarter financials, it was mentioned that three new onsite utility agreements for leisure centers may be close to signing. Also, a term sheet has been signed for a 400kW unit in a major hotel. Definite agreements for these four units have yet to be signed, but each project did already receive credit approval from one of the two major financial institutions. In addition, the Company is competing for a 330kW installation at a major British university, and it’s negotiating with a couple of parties for multi-unit installations.

Next to growth within the UK market, the Company signed a collaboration agreement with Czech CHP manufacturer TEDOM to promote EuroSite Power’s On-Site Utility solutions via more than 30 TEDOM dealers across the European Union and Turkey. The agreement allows dealers to offer an On-Site Utility solution to their customers as an alternative to buying a CHP system outright. EuroSite’s management aims to secure at least one sale in mainland Europe before the end of 2016.

Next to the continued growth in operating units, EuroSite is taking a number of initiatives to further increase its already impressive gross margins.

For example, the gas resale arrangement that EuroSite Power reached with Corona Energy, a leading independent energy supplier in the UK. The first customer to purchase gas via a discounted resale arrangement with Corona Energy was secured in early April. Abbeycroft Leisure’s contract for three of their sites ensures guaranteed discounted gas rates for their facilities while also improving EuroSite Power’s gross margin via improved site economics for the installations.

Two additional customers that want to make the switch from their current gas supplier to EuroSite Power have been identified. These two customers combined have six operating CHP units.

Also, the Company is looking at increasing the number of CHP units that it maintains with its own team. Currently, EuroSite has 31 machines in operation, of which 11 are TEDOM units. These come with a two year warranty when installed. In order to retain their warranty, they must be maintained by TEDOM’s UK dealer. However, the first unit will come to the end of that two year warranty period in July 2016. Consequently, EuroSite Power is looking at extending its in-house maintenance program to include servicing those TEDOM units as well. If the economics prove positive, this should help to increase margins further.

Operating expense improvement initiatives began to show results, delivering a small 1.1% decline in general and administrative expense and containing selling expense growth to a modest 2.7% in the period when compared to prior year results, this despite the Company adding an additional sales person on the quarter.

The Company also received $369,485 in Enhanced Capital Allowance (ECA) payments related to 2015 activities from the UK government. ECA is a cash energy tax incentive for energy-saving plant and machinery, which includes combined heat and power systems.

In just one quarter, EuroSite delivered its customers total savings of $138,967 when the cost of its combined operational fleet of CHP units is compared with the cost of conventional electricity from a utility provider and heat from a boiler.

Note that on May 12, 2016, the Company announced a private placement of $7.25 million to close on June 8, 2016. The new funding will be used to pay off the outstanding $2 million loan, support growth initiatives in the UK, aid in further expanding the business to the European continent, and for other general corporate purposes.

31st Unit Up and Running

Under the terms of a 15 year On-Site Utility agreement, the highly efficient TEDOM CHP system will provide power to the leisure center at a guaranteed lower rate than if the facility were to buy directly from the utility grid. The annual energy cost savings are estimated to be over $25,600 (£16,000), with no capital or maintenance costs for the customer.

Interesting to note is that the CHP system was installed as part of a new build project, which was a first for EuroSite Power. By opting for EuroSite’s CHP solution, the Flitwick Leisure Centre achieved the Target CO2 Emissions Rate (TER) defined by Part L2A of the Building Regulations 2010 in England and Wales.

The TER sets a minimum allowable standard for the energy performance of a building and is defined by the annual CO2 emissions of a notional building of same type, size and shape to the proposed building. These regulations specifically require building designers to consider the technical, environmental and economic feasibility of using high-efficiency alternative heating systems such as CHP. 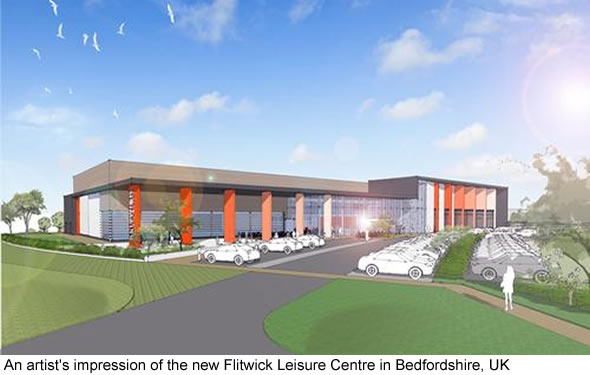 With a value to EuroSite Power of approximately $1.97 (£1.23) million, the contract brings the total portfolio of operational systems in the UK to 31 with a value to the company of $86.87 (£54.2) million from units totaling 3,178 kW electrical capacity. A further six systems totaling an additional 920 kW are also under construction, bringing EuroSite Power’s current contract value to $105.95 (£66.22) million.

EuroSite Power achieved a significant rise in both revenues and energy production in the first quarter of 2016. In addition, its gross margins substantially improved, as well as the fleet’s availability.

It signed up its first customer for a gas resale agreement, and achieved a project win for a 331kW unit, the largest so far in the Company’s history.

And last week, EuroSite raised $7.25 million, which enables the Company to eliminate the $2 million lone note that was on the balance sheet. At the same time, the financing, along with the credit facilities from the two banks to fund future projects, provide the funding and cash necessary to move the business forward rapidly over the coming months.