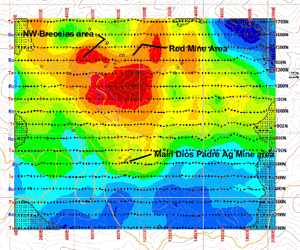 NSX Silver Inc. (NSY – $0.24) is a Canadian mining and exploration Company focused on advancing its Dios Padre Silver property in east central Sonora State, Mexico, from which 16 million ounces of silver were mined between the early 1700s and 1910.

Results from a recently completed geophysics and geochemical program at Dios Padre identified, next to the historically mined Santa Gertrudis open pit, six interesting anomalies. Four anomalies contained high values of copper, gold, silver and arsenic, while one other was a massive lead sulfide zone. The survey also revealed a very large conductive anomaly of 600 metres wide by 800 metres long with a depth of at least 300 metres. NSX commenced a drill program to test these anomalies in March of 2012 from which first results are expected this month.

Based on historic exploration programs, sampling and historic resource estimates, the Company targets to get a resource estimate of at least 60 million ounces of silver at Dios Padre’s primary zone, which can be mined relatively easily, and thus cheaply as an open pit.

NSX Silver has an Enterprise Value per Gold Equivalent Resource of $6.34, while three of its peers trade at a discounted average Enterprise Value per Gold Equivalent Resource of $20.25, or 3.19 times higher than NSX Silver’s. Based on these numbers and the Company’s significant upside potential, we initiate coverage of the Company with a buy recommendation and a price target of $0.83 or 319% higher than today’s 20-day average stock price.