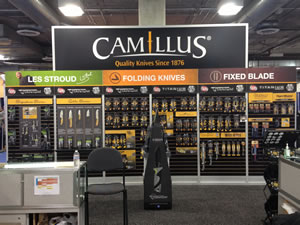 The Camillus booth at the 2013 SHOT Show

The annual SHOT Show was held last week at the Sands Expo and Convention Center in Las Vegas. Celebrating its 35th anniversary, the event attracted a record overall attendance of 62,371. More than 1,600 exhibitors, from all 50 states and 100 countries, filled booth space covering 630,000 net square feet.

The Shooting, Hunting and Outdoor Trade (SHOT) Show is the largest trade show of its kind in the world, making it critical to the success of many exhibitors and attendees. Also Camillus Knives, one of the brands of Acme United (ACU – $12.11), considers SHOT to be its biggest event of the year.

Similar to last year, the Camillus booth was packed when “Survivorman” Les Stroud did an autograph signing (see photo below). He was there to support the launch of his 2013 personalized Camillus tools, including several new knives and… survival kits.

Les Stroud is the star of the six-time Gemini-nominated hit TV series Survivorman, which is broadcast on the Outdoor Life Network (OLN) in Canada, Science Channel in the U.S. and Discovery Channel International. The TV series is licensed for broadcast in over 120 countries worldwide and became the highest rated show in history of both OLN Canada and the Science Channel U.S. Ratings in the U.S. alone have hit 2 million on individual episodes.

Late 2011, Acme United announced an agreement to build and sell Camillus survival knives and tools, co-designed and promoted by outdoor adventurer Les Stroud. The initial four knives under the Les Stroud Signature name were the SK Arctic, a mid-sized fixed blade knife, the SK Mountain which has a somewhat larger and partially serrated fixed blade, the SK Desert is a mid-sized folding knife and finally the SK Jungle, a large machete knife. These knives were introduced early 2012 and sold really well.

Because the knives had such a good reception in the market, Camillus decided to introduce five new Les Stroud knives at the SHOT Show this year. Photos aren’t available yet, but in this interview with Les Stroud, filmed at the event, the already highly anticipated Les Stroud Elite Series can be seen (starting at 5:30). According to the Company, the knives will be available in stores in a couple of months.

Also noteworthy is that Acme United’s relationship with Les Stroud has expanded beyond knives, as several new survival kits will be launched shortly under the Les Stroud name. Acme United already has many years of experience in the first aid business thanks to its PhysiciansCare and Pac-Kit brands. So putting together and distributing the new product family will be relatively straightforward.

Next to the five Les Stroud knives, about twenty other new Camillus knives were introduced at the SHOT Show. According to the Company’s representatives they received a lot of attention from US and international distributors and buyers.

Camillus’ contribution to Acme United’s overall sales continues to increase. And with a bunch of new knives and increased distribution, we’re positive that trend will continue in 2013.