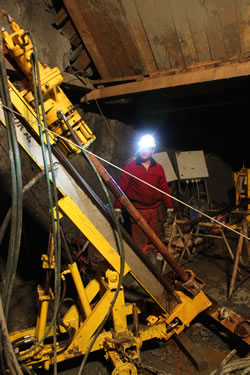 Roughly 35 holes, totaling 5,000 metres, are planned from two drill sites on Level 6 (see cross section 1 below). All drill holes are aimed at the Strieborná vein, which is a silver/copper/antimony mineralized structure of 1.2 kilometres long, 600 metres deep with an average thickness of 3.4 metres. The top of the vein commences approximately 35-50 meters below Level 6 (see cross section 2 below).

The current drill program has several objectives. First, it aims to both expand and to upgrade the current resource from the Inferred category to the Measured and Indicated categories. Furthermore, it’s intended to define the upper limits of the deposit as well as the grade and continuity of the silver resource in this area. This is important as it will determine where the first actual mining will take place.

The Mária Vein, which is part of the Strieborná property, has been mined since the mid-20th century. It was in operation from the end of the second World War when it became part of the newly established state enterprise Železorudné Bane š.p. (ŽELBA). The mine continued to be in operation under ZELBA until the 1990s.

The Strieborná (which translates as “Silver”) vein itself was discovered in 1981 adjacent to the Maria mine. It was subsequently explored on four underground levels totaling over 3,000 metres in length. Underground exploration and diamond core drilling on the vein was conducted from 1982 until 1994 by the exploration branch of the Slovak Geological Survey. However, due to depressed metals prices and the transition from a communist to a market economy in Slovakia, the property was abandoned in 1994.

In March of 2011, Global Minerals initiated a drill program designed to re-confirm high grade mineralization in the upper portion of the Strieborná vein, to test for extensions along strike and to test known parallel veins. This projected target area was not included in the NI 43-101 compliant resource estimate from AMC.

All the analytic results from the current drill campaign will be included in a new resource estimate, which is expected in the third quarter of 2013. Moreover, a Preliminary Economic Assessment, or PEA, is being prepared, which will include the NI 43-101 resource estimate and the results from ongoing metallurgical tests.

We like the Strieborná project, as it’s already well advanced with limited downside risk. Drilling is ongoing, a new resource estimate and EPA are on the way and metallurgical studies are advancing. Strieborná has excellent infrastructure, including sufficient electrical power, railway access, paved highways and a work force experienced with underground operations. Last but not least, Global Minerals has about $7 million in cash.