For a company with the willingness to boldly embrace new products and marketing strategies, Relevium Technologies Inc. (TSXV: RLV – $0.25 & OTC:RLLVF – $0.21 & Fra: 6BX – €0.16) has already proven it can be successful building incremental sales through its online distribution channel.

One key element to this approach is the ability to recognize important trend changes early on. This enabled Relevium to achieve a rapid growth profile as it became more proficient to tap into the rising popularity of point-and-click marketing. The Company was also quick to identify which product lines would be in great demand early in the sales curve, and therefore capture a larger market segment.

This week, Relevium has once again positioned itself at the leading edge to recognize and profit from new technology. The Company announced a Joint-Venture (JV) arrangement with Quantomic LLC, a company that specializes in Artificial Intelligence (AI) to enhance marketing services.

Quantomic has developed the Tagspire app, which is available for iOS and Android. The trademarked system uses a process dubbed ‘auto-tag’ that automatically adds interactive info-and-purchase tags to products that it recognizes on images and videos. The artificial intelligence engine – using Google TensorFlow – can currently recognize over 35 million retail products ranging from apparel to electronics and cosmetics.

The image below of a living room was shot and uploaded using Tagspire. As noted, several items on the image, such as the pillow, rug, and coffee table, were recognized by Tagspire’s ecosystem and tagged. When this image is uploaded to a mainstream social media platform, such as Instagram, Facebook, Twitter, or Pinterest, the embedded tags appear. As soon as a visitor then hovers over one of the tags, a small text box will pop up with more information about the product. The text boxes also feature links that enable consumers to connect directly with purchase outlets for products that appear on their screens.

In effect, Tagspire creates the opportunity to identify and buy specific products directly integrated with the presentation of photos and videos as people view their favorite social media websites. Tagspire currently connects to such retailers as: Best Buy, Avon, Target and American Eagle. 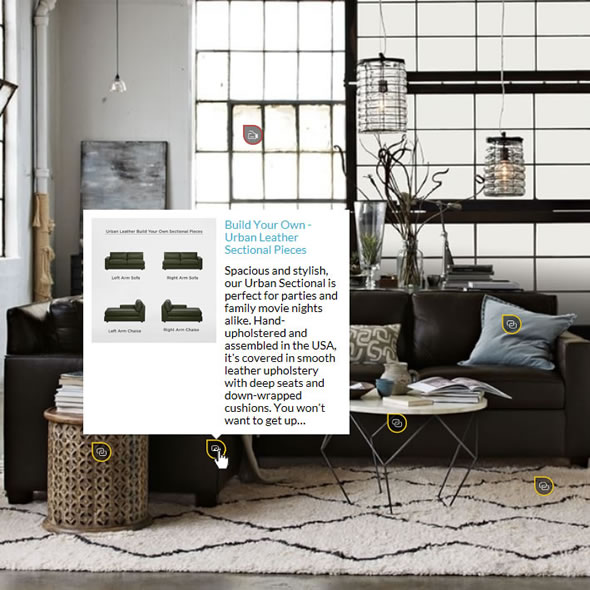 To further illustrate the power of the technology, click here to watch a short video illustrating the Tagspire mobile app.

The Tagspire technology represents a quantum leap in the reach of e-commerce, as it enables precise product recognition and marketing opportunities derived in real time from third-party content. In addition, it allows users to earn a commission on any sales generated from the images that are ‘tagged’ in their photos or videos. The commission serves as an incentive to encourage people to use and share the technology.

The Tagspire system is also of interest because an enormous amount of consumer information is collected as part of the process, and that data has great value to the companies involved.

The Appeal of Blockchain Technology to Raise Funding

Another innovative aspect to this JV is the proposal to fund it through the issuance of an Initial Coin Offering (ICO) financing that may raise $20 million or more. The popularity of blockchain coin and token offerings has taken the entire market by storm over the last year and the partnership is investigating the prospect of completing a new ICO as part of the structure for the JV arrangement.

The plan is to roll the Tagspire JV into a NEWCO, which would be owned 51% by Relevium after the completion of the ICO, and payment of $8 million to Quantomic. The burden of start up costs to enable the ICO would also be carried by Relevium. In turn Quantomic would contribute all intellectual assets, licenses, and proprietary information related to Tagspire and retain 49% ownership of the JV.

The balance of the raised funds, will be used to fund NEWCO and the continued development of the Tagspire platform and ecosystem, including blockchain integration, data set acquisitions, AI programming and training, server and software costs, marketing and human resources.

Relevium may opt to pursue a conventional equity financing to raise the required funding, and will investigate the options involved with the commitment to choose whatever is the most effective to extract the highest value for its shareholders.

There are synergies related to this JV arrangement that dovetail with the core competencies already demonstrated by the Relevium management team. It will not displace the existing sales channels already employed to market the BioGanix line of neutraceutical products, however the Tagspire platform will open up a complimentary avenue to further boost sales. In effect, the opportunity exists to enhance the effectiveness of the overall online marketing strategy already embraced by Relevium management.

Meanwhile, a successful launch and eventual widespread adoption of this new technology opens up a diversified revenue stream with almost unlimited applications. It also creates marketing opportunities for the data itself, collected as millions of consumers interact with the system and make individual purchasing decisions.

As the Company explores the option to complete a possible ICO transaction, that too could have a positive marketing benefit as speculators have shown great enthusiasm towards innovative companies that participate in the emerging blockchain technology universe. This aspect alone could create further shareholder gains. Recommendation BUY.