CanAlaska Uranium Ltd. (CA: CVV – $0.29 & US: CVVUF – $0.22 & GER: DH7N – €0.19) has once again demonstrated that it is becoming an active player on the Canadian exploration scene. With a program comprising a total of 1000 meters of drill core in four holes, the Company has followed through on its stated objective to validate the potential for its North Manibridge project in Manitoba.

More specifically, CanAlaska investigated the potential of a structure which has been interpreted as an extension of the same system that led to the establishment of the adjacent Manibridge Nickel mine, located roughly 3 kilometers to the south of the target area. The four drill holes in this campaign targeted a small part of this structure where a deformation zone corresponded with promising anomalies identified in a geophysical survey completed several years ago.

The Company reported that all four of the drill holes completed in this program successfully encountered robust zones of nickel-bearing mineralization. The mineralized intervals were located at relatively shallow depths below surface, and included several sections with extremely attractive nickel grades. Another positive factor, copper and cobalt were also encountered in some of the alteration intersected by this drilling work, and therefore the potential for valuable by-product of other metals may enhance the economic outlook for further discovery. 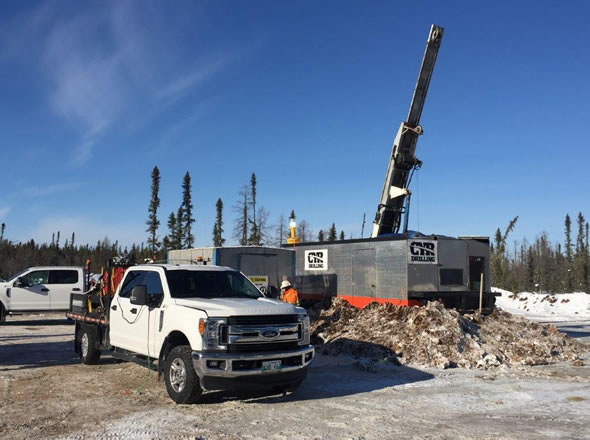 Perhaps the most intriguing assays presented came from the analysis of drill hole 19MB-03, where two separate mineralized intervals were encountered. One 2.11meter section starting from roughly 134 meters depth was found with an average of 4.3% Ni. A second mineralized zone was encountered further down from 139 meters along the drill core, in an interval of nearly 5meter with an average of 1.13% Ni. Of this section, a higher grade half meter interval of 4.43% Ni was measured. The mineralization was encountered within disseminated and semi-massive sulphide alteration of the host rock formation.

In drill holes 19MB-01 and 02, clustered in close proximity to the collar of aforementioned hole 19MB-03, CanAlaska reported multiple zones of mineralized alteration. A ten meter interval starting from a depth of 131 meter yielded a section of 3.03% Ni over 1.25 meter in 19MB-01, followed by a wider section spanning 5.45 meter with an average of 0.95% Ni. Two high-grade nickel zones were also observed within 19MB-02, including a section of 0.95m bearing 9.74% Ni amidst an interval of more than 6m averaging 2.39% Ni. This high grade zone was even more appealing in that attractive grades of cobalt and copper were also encountered in this alteration across significant intervals.

Drill hole 19MB-04 was the northernmost extension of this round of drilling and it also presented an intriguing aspect to the program. The drilling successfully intercepted the target structure at a depth of 87 meters where a high grade interval of 6.4% Ni and 0.55% Cu was encountered within a 0.55 meter interval of drill core. This drill hole was intended to test an electromagnetic conductor identified from geophysical surveys for the area. However the mineralization encountered was hosted within alteration of characteristically low sulphidation that would not have accounted for the EM anomaly. Therefore this suggests that a higher sulphide zone may be in close proximity to this drill hole which may represent an attractive target for follow up drilling work.

The results were available in time for the annual Prospectors and Developers Association (PDAC) conference in Toronto this year, which attracts representatives of all leading worldwide mining companies. This was the ideal forum for CanAlaska management to network with potential partners and provided the opportunity for discussion of the attractive drilling results.

Given that the Thompson Nickel Belt is the fifth largest district in the entire world for the production of nickel and that no fewer than 18 significant deposits have been defined within this district, the potential for an important resource expansion at the North Manibridge project is now validated with the completion of this focused drilling program. Combined with analysis of historic drilling work by prior operators on the property, the presence of a mineralized structure has been established with observed similarities to the ore body formerly mined at the nearby Manibridge Mine.

Of note, the largest mines in this district were discovered some 30-40 years ago, and many of them have remained in production to the present. The exceptional discovery potential elsewhere in this mineral belt has been on the back burner as most of the activity has been focused at the northern extension of this prolific trend.

The North Manibridge property is located further to the south of this trend and has been largely overlooked. With the latest results presented by CanAlaska, encountering mineralized zoneswith sulphide “tenor’s” of 20-30(roughly triple the intensity of tenor in the established mines to the north), this opens the potential for high grade deposits in areas that were previously overlooked.

In addition to the zone of interest spanning roughly 400 meters that was the target of this preliminary drilling program, CanAlaska has identified numerous other attractive targets within the property area that warrant further investigation. The overall exploration potential for this project is superb and the recent drilling work has attracted the interest of several major mining companies during the PDAC.

CanAlaska is pursuing a joint-venture partner to take leadership of the exploration process at this project and enable the exploration work to continue while the Company advances its suite of uranium exploration assets.

The management of CanAlaska has assembled an excellent portfolio of property holdings with the potential to build shareholder value through the exploration process for a variety of metals. With its uranium assets earmarked as the top priority, the Company is pursuing a strategy to vend its promising North Manibridge project into a joint-venture arrangement so that a partner company may continue with exploration work and fund the activity. To secure the best terms for such a deal it was necessary to complete preliminary drilling work that could validate the discovery potential for this asset.

It appears that CanAlaska has achieved this objective with the results from this drilling work in hand. The presence of high grade and high tenor nickel, along with valuable by-product cobalt and copper content encountered in every drill hole, represents a compelling confirmation of the potential for additional deposits along this highly prospective corridor. With the similarities observed in this alteration system to the nearby Manibridge nickel mine it appears that other base metals exploration companies have become interested in the project and perhaps a transaction may be close at hand to advance further exploration work.

For shareholders of CanAlaska this recent activity builds confidence for the future. The North Manibridge property area was recently expanded through staking to cover more of the prospective exploration target zone. The Company was able to secure control of this asset at bargain levels, and has already added value through its preliminary exploration work. If indeed a joint-venture partnership is now in the offing, it will build the value proposition further and provide leverage to the potential for a more significant base metals discovery in the future, while CanAlaska continues to build value from its uranium assets in Western Canada. Smallcaps Recommendation: BUY.