News » Peru’s Modern Day Gold Rush May Just Be the Tip of the Iceberg For Palamina Corp.

Peru’s Modern Day Gold Rush May Just Be the Tip of the Iceberg For Palamina Corp.

A recent article made worldwide headlines after details surfaced with regards to a major gold smuggling and money-laundering enterprise. With undertones of intrigue reminiscent of a drug cartel operation, the troubling aspects of a well-established black market for gold and the enormous cash value of the transactions involved triggered troubling implications for customs and regulatory agencies of several countries. At the same time, the article also served to illustrate the tremendous gold exploration potential on the south-eastern side of the Andes Mountains in Peru, which accounts for the majority of the gold being purchased for underground money laundering schemes.

The article reports that up to 100 tons of gold were reportedly purchased and resold in the money laundering scheme from 2000 through to 2017. This amounts to roughly 3.2 million ounces of gold! The majority of the gold was mined by over 35,000 small scale illegal miners exploiting alluvial and placer deposits at Madre de Dios in the watersheds at the lower elevations of the south-eastern Andes Mountains. At Madre de Dios, gold has accumulated in gravel and stream sediments from untold centuries of erosion and spring-thaw cycles washing gold particles down the adjacent mountainsides.

The alluvial gold at Madre de Dios is widespread and to date covers an area of over 650 square kilometres and continues to expand annually. Alluvial gold is > 30,000 hard rock and alluvial gold miners who have ground–truthed numerous gold trends that extend for kilometres. Informal hard rock miners are limited to mining down to about 50 metres where these orogenic gold systems may extend to >1km in depth.

When a trading company with five employees in the Amazon jungle on the south-eastern side of the Andes is responsible for exporting an estimated 100 tons of gold out of Peru and the main office sits adjacent to >650 square kilometres of alluvial gold deposits being mined by >35,000 informal miners, it begs the question; Where is all the gold coming from?

The Tip of the Iceberg

Since the time of the Inca’s, Peru has had a significant mining tradition and currently sits fourth in the world for gold production. Peru is also number 1 or 2 for silver and produces a tremendous amount of copper, lead and zinc. The geologic forces at work that resulted in the formation of the Andes Mountains are responsible for Peru’s prolific metallic deposits throughout this portion of the ring of fire.

The Puno Orogenic Gold Belt is a geological section of enriched gold-bearing rock formations that stretches roughly 175 kilometres laterally by 75 kilometres vertically across the eastern side of the Andes in southern Peru. This corridor of highly prospective terrain was previously very difficult and expensive to reach where a Trans-Oceanic highway and newly constructed electric dams has lead to tremendous improvements in infrastructure and now provides much greater access. Within the Puno Orgenic Gold Belt and equal number of informal miners are actively exploiting hard rock and alluvial deposits. The largest of these being La Belle Durmiente at the top of the Andes in La Rinconada where > 30,000 miners are working at >5,000 metre elevation below a glacier. La Rinconada is also seeing the number of its inhabitants growing year over year and it is the highest inhabited city in the world and sits at the same elevation as the base camp of Everest! 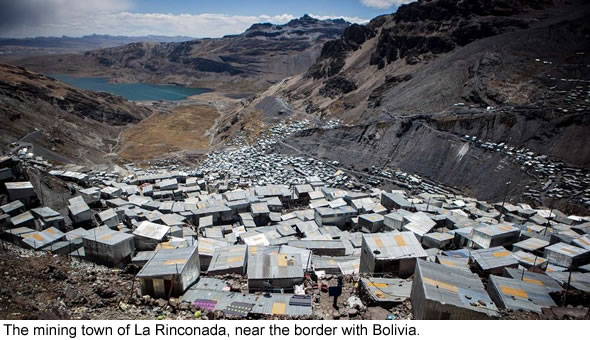 In the POGB known mineralized gold vein structures have been traced along strike for up to 6 km (~3.7 miles) and may extend down more than a kilometer below surface. To date access to the POGB has been limited where the most sophisticated exploration efforts have resulted in numerous +1M ounce gold deposits and many remain open at depth. Madre de Dios in the Amazon jungle and la Belle Durmiante below a glacier at the top of the world are really just the tip of the iceberg of the largely untested Puno Orogenic Gold Belt.

Junior explorer Palamina Corp. (TSXV: PA – $0.38 & OTC: PLMNF – $0.28) first attracted an all Peruvian exploration team with 35 years experience in the POGB before staking and acquiring 5 district scale gold projects within the Puno Orogenic Gold Belt. Unlike other companies looking to source mineralization from streams all of Palamina’s Project areas have been ground-truthed by informal miners and have yet to be drill tested where the mineralized depth potential is unknown. With a suite of 5 projects, Palamina now controls more than 35,000 hectares of titled and ground under application throughout the belt.

Consider the Gaban Gold Project, located beside the town of San Gaban on the Interoceanic Highway, down the highway from the newly built San Gaban electric dam and four hours by highway to the Puerto Muldonado airport. Palamina has acquired an interest in roughly 85% of the watershed for the Yanamayo River, bound on all four sides by mountain ranges. At least ten groups of alluvial miners are active at various points along the Yanamayo river system mining coarse gold from the streams in placer deposits where Palamina believes the source of the gold is likely from gold bearing shear zones similar to those of the Ollachea gold deposit 45 kilometres up the Trans-Oceanic highway.

Members of Palamina’s geologic team defined the Ollachea deposit and Palamina has recognized many geologic similarities. Gaban also sits upriver and is in the watershed of Madre de Dios. Given the coarse gold nature of the gold and that the area of the Yanamayo river being mined is bound by mountain ranges, Palamina is exploring the surrounding mountains for mineralized outcrops in order to locate the source of the river gold. Palamina has carried out numerous rounds of staking and acquired two tiltled properties and completed 5 exploration campaigns. Initial sampling returned up to 4.9 g/t gold at -60 mesh in stream sediment sampling and several sheer zones have been located.

At the Coasa Project, Palamina has staked and acquired what it believes is the extension to the Crucero gold deposit in an east west trend similar to that of the Ollachea gold deposit. Ollachea and la Belle Durmiente are at the same elevation and both occur within flexures in known gold system. Geophysical programs are planned to define structures which will be followed up in the field in order to define drill targets. The Phusca shear zone is the most interesting target to date as it sit in a flexure, within the same shear zone as the Crucero gold deposit and has many similarities to the Ollachea gold deposit.

Palamina’s proven exploration team is supported by directors and advisors with a proven track record of finding significant precious metals deposits. Palamina completed an oversubscribed $2.15M private placement in Q1 of 2018 and have less than 30M shares outstanding.

With a geological team with over 35 years experience in the belt and an enviable portfolio of district scale gold properties yet to be drill tested that have been ground-truthed by informal miners, Palamina’s odds for success are above average. If the estimated 100 tons of gold from an expanding gold rush demonstrates anything it’s that the gold potential is unknown and may be world class. Palamina believes that the jungle and glacial gold may only be the tip of the iceberg and drilling is required to test the Puno Orogenic Gold Belt’s true potential. Recommendation: BUY.