This week, Blue Sky Uranium Corp. (CA: BSK – $0.15 & US: BKUCF – $0.11 & GER: MAL2 – €0.09) released the results from a Preliminary Economic Assessment (PEA) completed for the Ivana uranium-vanadium deposit at its flagship Amarillo Grande Project, located in Argentina. The purpose of this PEA is to present analysis of the potential economic viability for the resource as currently outlined. The study considers characteristics of the deposit and metallurgical performance for the resource material, and generates estimates for the costs and economic expectations of the proposed mine development. This provides a basic outlook for the project in terms of economic viability of a mine plan.

Several attractive economic estimates have been presented that suggest a very profitable mining operation may commence at Amarillo Grande and continue production for many years.

The positive factors that are outlined in this study, include a life of mine extending 13 years, with a total estimated production of 17.5 million pounds of uranium and 6 million pounds of vanadium. The PEA indicated a robust economic outlook, with the internal rate of return above 29% and after tax payback on investment in just 2.4 years. The production cost estimate of just $16.24 per pound of U3O8 (net of vanadium by-product credits) over the life of mining activity is also encouraging, given that the multi-year uranium spot price average is trending well above this level.

Another very appealing aspect to this project is that the currently outlined resource extends roughly three kilometers and varies between 100 to 400 meters in width, with nearly all of the deposit located within 25 meters from the surface. This makes the deposit ideally suitable for low-cost, open-pit mining. 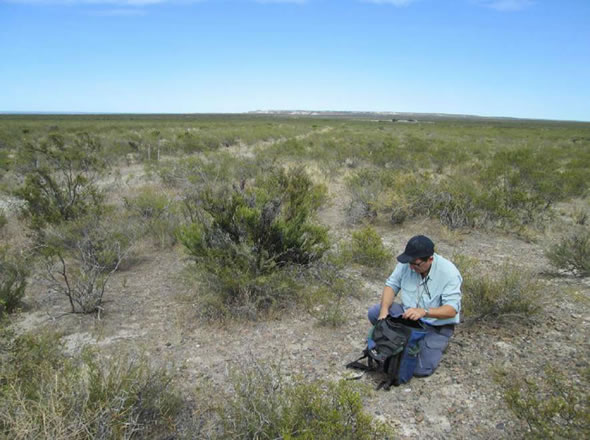 The soils at Ivana are described as entisol, meaning soils with no development of horizons and poor fertility. The area is mostly covered with bushes known locally as jarilla, as seen in the photo above.

The strip ratio is a calculation used to define the ratio of waste rock that must be excavated and removed in comparison to the mined resource material. The study estimates a strip ratio of 1.1:1 which is considered very attractive as it implies that less surface stripping is required prior to accessing the mineral resource, and the deposit geometry is very well aligned with the planned outline of the pit as mining continues further to depth.

Moreover, the deposit is hosted within loosely consolidated gravel and sands, which can be mined with conventional excavators and need not require explosives to fragment the host rock prior to extraction. The mine plan calls for two excavators, a front end loader, and a small fleet of trucks to enable a production rate of 2,170,000 tons per year through the mill. This represents an exceptionally low cost extraction scenario for a production level of this magnitude.

Finally, the presence of valuable vanadium, embedded within the same mineralization that hosts the uranium, adds another component of positive economics to the mine plan as most efficient recovery option as the vanadium may be recovered as a by-product through secondary processing.

The study incorporated results from lab testing for metallurgical efficiency that indicates roughly 85% of the uranium plus 53% of the vanadium resources may be recovered though the recovery plant as currently designed. Through additional metallurgical testing and process design optimization work, even higher recovery efficiencies may be achieved, leading to improved project economics and greater overall production.

Based on the currently defined resources, the mine plan extends through a 13-year mining life. However significant additional expansion opportunities have also been identified with the potential to outline a much larger total resource that may further extend the life of mine. Nearby satellite deposits may also be discovered, suitable for the continuance of operations even further.

With the successful results presented in the PEA, the next step in the process will be an aggressive drilling program is scheduled to commence, perhaps as soon as April, to follow through on the next objectives including upgrading the inferred resources of the deposit, and advancing further exploration work. Later this year, the goal is to start work on a more detailed Prefeasibility Study.

Publishing a PEA is an important milestone for a company as it represents the first snapshot of the economic parameters for a project. In the case of Blue Sky Uranium’s Ivana deposit, the study indicates that the proposed mine development can make a lot of money even at this preliminary stage.

The baseline production costs projected for the life of the mine are low and well within positive economic expectations. However the outlook is even stronger when considering that both uranium and vanadium spot prices have been headed higher recently, and are expected to continue rising. With the potential for a mine development plan emerging within a time frame of just 3 years it appears the timing is fortuitous indeed for this development prospect to move forward.

The Ivana deposit is still considered to offer exceptional potential for further expansion, and with other targets in proximity within the large property area, the prospect to double or even triple the total resources for this project remains in reach.

The Ivana deposit is already the largest uranium resource in Argentina. Ideally, Amarillo Grande may advance rapidly to where it could become one of the largest and lowest cost uranium producers in the world. Smallcaps Recommendation: BUY.