News » Our Eye-Opening Visit to The Strieborna Deposit In Slovakia

Our Eye-Opening Visit to The Strieborna Deposit In Slovakia 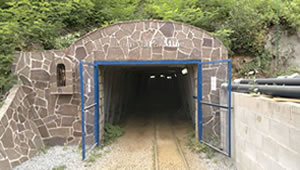 The entrance of the Strieborna silver mine in Slovakia.

We visited the Strieborná silver/copper/antimony property this week in Slovakia. It was a real eye-opener as the visit made us realize, even more than before, that Strieborná is quite unique.

Typically, a project has to go through the discovery, exploration, feasibility, financing and development stages before it can start production. This is not the case at Strieborná, which is 100% owned by Global Minerals Ltd. (CTG – $0.48). While the deposit is still in exploration stage, as drilling and metallurgy work will be conducted the following months, it’s also in development stage as the former mine is completely being rehabilitated.

That’s the real beauty of the Strieborná project. Most of the underground tunnels have already been completed in the 1980s and 1990s during the communist era. Imagine if Global Minerals had to build all the underground infrastructure. It would take the Company years and tens of millions of dollars. As a result, the project’s value would be much less than it is today.

Because a photo says more than a thousand words, we’ve added a gallery below which will give you an impression of what we saw and learned at Strieborná.

Strieborná is a well advanced project. It’s located in a mining friendly country and it can be brought into production at a relatively low cost since the underground workings are already there.

With a current cash position of approximately $13 million, Global Minerals is sufficiently funded to rehabilitate the rest of the property, restore access to the Strieborná vein and commence an underground drill program.

Near-term work will also include metallurgical testing, process flow-sheet design, concentrate marketing and mine planning with the goal of completing a preliminary economic assessment in 2013 and with the ultimate goal of entering production in 2014.