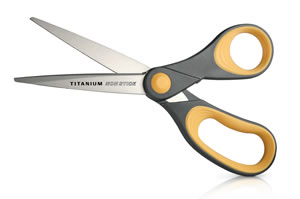 Acme United is well known for its non-stick titanium bonded scissors. The new patent ensures these will only get better.

Acme United (ACU – $11.15) was awarded a new patent that covers a broad range of titanium coating compositions and thicknesses, which enhance the wear resistance and hardness of cutting edges.

This may sound like an everyday event, but it really represents the heart and soul of Acme United. Staying on top of things so that the latest and best materials can be applied on products like scissors, knives and school and office items.

Many of the Company’s products have a titanium carbonitride coating, making the knifes and scissors blades more than 3 times harder than stainless steel. Or scissors blades get a non-stick coating, making them useful in difficult environments like the floral area for cutting and trimming flowers and bushes, or in the arts and crafts area, where lots of glue and paste is used. Also, some school and office products have Microban® antimicrobial protection added during the manufacturing process to prevent the growth of bacteria on the surface.

Another part of the Company’s success is its goal to innovate. A couple of years ago, Acme launched the iPoint electric pencil sharpener. Its trendy design and ease of use have made it a phenomenal success. In 2011, the sharpener’s revenues reached about $11 million, making it one of Acme United’s best selling products.

This year, the Company introduced, amongst others, the Scissor Mouse, which is the size of a computer mouse, but is used to cut paper. There’s a little tab under the tool that grabs and cuts the paper. Additionally, it has a measuring guide on the front. It’s mainly used in arts and crafts markets to cut any lightweight papers. It’s expected to contribute $1.5 million to sales in 2012.

In other news, Acme’s Board of Directors declared another 7 cents per share quarterly cash dividend. It’s payable on October 23, 2012 to stockholders of record on the close of business on October 1 2, 2012.

The Company has been paying a quarterly dividend for many years and has increased the amount by 1 cent every 6 to 8 quarters. The last increase was in August of 2011 when the dividend went from 6 to 7 cents per share, which at today’s share price is an annual yield of around 2.55%. This is substantially higher than the interest rate on a regular savings account or a 10-year bond.

For the second quarter, ended June 30, 2012, Acme released its highest quarterly sales and earnings numbers ever. Net sales for the quarter reached $27.6 million, while net income was $2.06 million, an increase of 15% and 18% respectively compared with the second quarter last year. The Company expects this trend to continue in the second half of 2012. This growth can largely be attributed to the Company’s innovations it introduced over the years.

The growth is also reflected in the stock price. During the second quarter of 2012, the stock price climbed above $10 per share where it formed a solid bottom. A couple of weeks ago, the $11 mark was broken and is now holding steady.