The emergence of distributed power generation was initially motivated in response to the limited access of reliable electricity for remote locations. As generators have evolved to become more efficient and reliable, it is the economic performance advantages of the most advanced technology that is now driving growth, even in areas that are well served by conventional electricity access.

This week Tecogen Inc (NASDAQ: TGEN – $3.08 & Fra: 2T1 – €2.58) reported the sale of six of its InVerde e+ cogeneration units, to be installed among four separate projects within the greater New York City metropolitan area. The combined power generation of these units amounts to 800 kW.

One of the attractive features of the InVerde e+ line is the integrated functioning with demand response electricity operations. The program enables independently operated generator units to be activated during times of peak energy demand within the electric grid, allowing these units to supply additional power that contributes to stabilizing the grid. In the event of a grid shutdown, the cogeneration units are still programmed to disconnect from the grid and provide backup power to meet the needs of the end user.

New York City is a case study for the effectiveness of this cogeneration system. As one of the largest municipal service areas in the United States the demand response program offered by electricity utilities encourages large power consumers to invest in cogeneration units that can provide additional power during times of critical grid demand.

Tecogen operates three service centers in proximity to NYC. This ensures availability of technicians to maintain and service equipment, plus rapid access to parts. The service support on hand for this large urban center is a contributing factor to the large client base in the area.

As was reported within the news release, all of the new installs will receive partially offsetting state incentives which serve to lower the net cost base for these units, in addition to the financial incentives paid by the electric utility as part of the demand response program and the ongoing operations of the cogeneration systems.

The legalization of cannabis in several US states has led to a boom in greenhouse growing centers for the cultivation of cannabis plants. However, a fully controlled environment is necessary to create the optimum growing conditions within the greenhouses. Since the Tecochill line delivers air conditioning and humidity control, operators gain the capability to manage the indoor climate of their facility. This has led to several breakthrough sales for Tecogen in the sector.

A few days ago, Tecogen announced the latest greenhouse facility that has chosen to install Tecochill systems to manage its full spectrum energy and climate control requirements. The Company reported that two Tecochill STx 200 ton natural gas engine chillers will be installed at a facility in Massachusetts. This is now the 12th cannabis growing center in North America to trust Tecogen for their essential energy requirements. The Company expects that this trend will continue, especially within Massachusetts where electrical costs are very high. 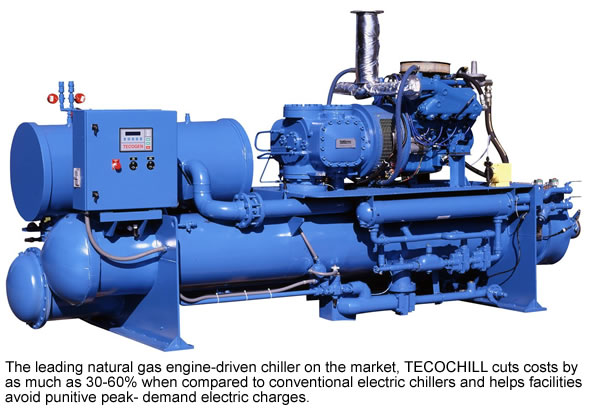 In the United States, cannabis has been approved for sale on a state-by-state basis and producers that want to participate in close proximity to their target market are often forced by necessity to establish growing centers in jurisdictions where higher electricity costs are an issue. The advantages of a Tecogen chiller therefore represents material savings while it also reduces the overall energy demand on the local grid. It should also be noted that the natural gas fueled units also contribute to a more environmentally friendly power option with lower greenhouse gas emissions, which may also be an important consideration for certain jurisdictions.

To ensure that the Company retains its leadership position in this important sector, Tecogen has assigned a dedicated engineer for product design related to specific applications for greenhouse installations. Tecogen also attends cannabis industry conferences and events to generate leads as part of its sales strategy.

Tecogen has developed the most efficient CHP systems around. These advanced units are considered best in class and result in much lower operating costs compared with a typical distributed power installation. This has been highlighted by the growth in the client base located in the important New York City region. The sale of six new InVerde e+ units announced this month, demonstrates that growth potential.

Tecogen operates three sales and service centers in the NYC area. This enables a fast response time if something goes wrong, and contributes to a record of mechanical reliability for the installed Tecogen units that is the best in the industry.

Access to reliable and uninterrupted power is essential for the operators of indoor growing centers. The climate control options provided by the Tecochill system contribute another layer of benefits, next to lower operating costs and reduced electrical infrastructure requirements.

High value cannabis crops must be grown in controlled climate facilities that require full online energy access and air conditioning/dehumidification. The Tecochill line is an ideal solution for these greenhouses. The rapid growth of the cannabis sector is expected to continue and contribute to further sales of Tecochill units. Recommendation: BUY.