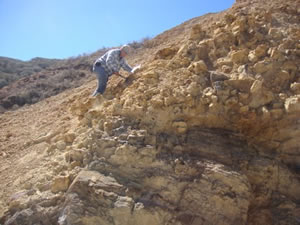 NSX Silver (NSY – $0.16) announced that analytic results from the first six holes, drilled near the historic workings on the Dios Padre property, all intersected silver and gold mineralization (see table below).

The first six holes targeted a large geophysical anomaly, which was identified during a geophysics and geochemical program in 2011. However, no gold or silver mineralization was identified in those holes.

The other ten holes targeted the area in and beneath the historically mined Santa Gertrudis open pit. Remember that the Dios Padre property has a long and vivid history as a high grade producing open pit mine. Sixteen million ounces of silver is reported to have been mined between the early 17th century, which were operations directed by Jesuits, and more organized mining efforts under L.V. Limited between 1860 and 1910.

This silver deposit is hosted inside a breccia pipe, which is a volcanic structure that intrudes into surrounding rock. Meaning that the structure extends deeper where there’s potential to find more valuable metals.

Very positive about the results that were published this week is that gold and silver mineralization was found both closely under the surface, making it relatively easy to mine as an open pit, and also at depths of 200 to 300 metres. The deeper mineralization reinforces expectations of the potential for additional higher grade mineralized zones below the known historic mine workings and within the feeder stock that appears to trend to the north-northeast of the Dios Padre breccia zone.

Drill results for the final four holes are pending. Once these have been received back from the lab, a geological model will be prepared that will assist in planning the Phase II exploration program. This program will include additional drilling and is expected to commence in the fourth quarter of 2012.

The Phase II program will also take into account the results from a geochemical sampling survey, which NSX Silver recently commenced at the 6,000 hectares of ground that it holds in the vicinity of the Dios Padre project. During the survey, the Company’s geologists will focus on areas that exhibit anomalous geological features. These may become additional exploration targets.

Although assay results for holes DP-13-2012 through DP-16-2012 are still pending, it’s already clear the drill results are positive.

Obviously more work will have to be conducted to find out what’s really there. This will happen later this year. NSX Silver has sufficient money in the bank to fund all its upcoming plans.