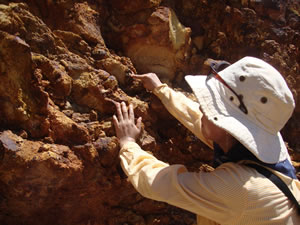 NSGold's Mexican geologist pointing out some of the visible rock alterations at the high potential Dios Padre silver property.

NSGold Corporation (NSX – $0.48) is actively conducting exploration work on almost all its properties, which will lead to a flow of results the coming weeks.

In Nova Scotia, Canada, airborne LiDAR surveys have been completed on the Company’s gold properties Mooseland, Cheticamp, Indian Path, Ecum Secum and Moosehead, covering a total area of 141 square kilometres. The LiDAR technology allows geophysisists to produce highly detailed topographical maps with an accuracy of up to 20 mm (0.79 inch). Because these maps are so precise, they’re a great tool to help identify potential mineralized zones on these properties. Interpretation of the LiDAR survey is pending after which further steps can be taken based on the results.

At NSGold’s most advanced property Mooseland, a 5,000 metres drilling program is ongoing. In total, 15 holes are planned, which will be testing promising areas of Mooseland that have been sparsely drilled in the past. A few additional holes may be drilled when, for example, LiDAR results show a high potential structure.

Seven drill holes have been completed so far on the East Zone at Mooseland. One more drill hole is planned for this zone after which the drill will be moved over to the West Zone. Results from the first completed drill holes are expected to come in from the lab any time.

At Ecum Secum, a property that was optioned late last year along with Moosehead, a trenching program will be completed this month. The Moosehead and Ecum Secum properties together total 74 claims encompassing 1,197 hectares.

Both were producing mines around the early 1900s and relatively high gold grades were recorded. The Moosehead mine, for example, was operated for several years by the “Boston and Goldenville Gold Mining Company” and yielded 509 ounces of gold from 3,408 tons of ore. Also at Ecum Secum, there’s ample evidence of historic mining activity including pits, trenches and three shafts. Despite the attractive gold grades, very limited exploration work was carried out on them afterwards.

Finally, progress is also being made on NSGold’s 5,000 hectares property that has a rock package known to contain Rare Earth Elements (REE). Over the next few weeks an initial prospecting program utilizing a portable x-ray fluorescence (XRF) analyzer is planned for this property.

REE’s, like lanthanum, tantalum and neodymium, are used in everyday products like laptop computers and iPhones. However, China owns more than 85 percent of the known global reserves of Rare Earth Elements, making the rest of the world dependent on China’s exports. This potential threat has set off a worldwide search for new rare earth mines.

A follow-up 10,000 metres surface and underground drilling program, budgeted at $3 million, will target the known resource in the Dios Padre breccia.

NSX was also able to again expand its Dios Padre property by staking an additional 2,500 hectares in the vicinity of the original silver mine.

Results on all these activities are expected to become available in the next few weeks and months. We’re confident they will give the Company’s geologists a bunch of new information and exploration targets.

The timing of the results may also be perfect for something else; the spin-out of NSGold’s Mexican silver assets into a new publicly traded company called NSX Silver Inc. In itself, the spin-out is expected to have a positive effect for shareholders because today, NSGold is only valued at its Nova Scotia gold assets, excluding its high potential Dios Padre silver property. The Spin-out, combined with positive results from surveys and ongoing exploration work, should give both stocks an additional boost.